Joanne Chang, author of Flour and owner of Boston’s Flour Bakery, discusses her love of childhood treats and what it was like to throw down Bobby Flay. 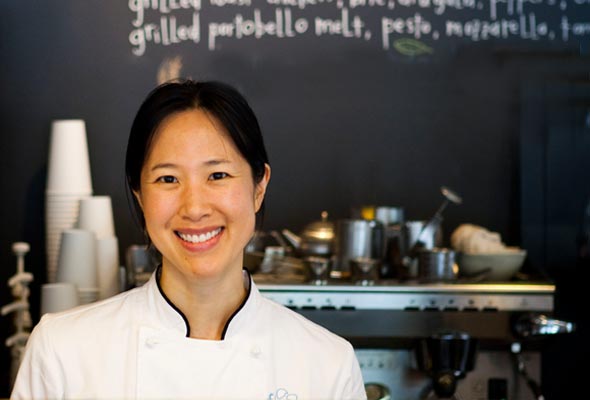 I first met Joanne Chang, owner of Flour Bakery, in Boston, last spring. Neither Joanne nor Flour were the object of my visit: I was there to meet a friend I hadn’t seen in a while. But the moment I walked in and was met by the sweet, yeasty aroma of pastries well baked, I was hooked. The line, even at that off hour of the morning, was long. I was having a hard time deciding what to eat while I waited for my friend and finally narrowed it down to two choices: Homemade Pop-Tarts and Homemade Oreos. Seeing how fast the Oreos were flying out of the display case, I opted for them.

Sublime, is all I can say. They were four times the size of their less-than-stellar packaged cousins, and 1o times as tasty. The filling had nary a one of those impossible-to-pronounce ingredients. Nothing but butter, sugar, milk, vanilla, and salt. And the cookies were crisp and rich with a dark, almost smoky chocolate flavor.

To flip through Joanne’s cookbook is like tripping lightly through our childhoods–or those of us of a certain age who grew up in the States. A Taiwanese-American raised by immigrants in a home bereft of anything sweet, Joanne lusted after the treats that filled her friends’ lunch boxes. (Why does that sound familiar?) Determined to make them herself, she marched into her mother’s kitchen at an age when she could barely see over the stove and began experimenting. Fast forward a few decades and Flour is the result—both the bakery (of which she has three) and the book.

During our chat, Joanne traced her attachment to deeply American treats, her desire to best what was on supermarket shelves, and the struggle to leave behind a Harvard education in mathematics in order to pursue her love of all things floury–much to the stunned silence of her parents. And we discussed what it was like to beat Bobby Flay at his own game on “Throwdown with Bobby Flay.” He and his team were convinced they could top Joanne’s amazing sticky buns, but to no avail.

And, yes, at the end of our podcast, that’s me getting a little too intimate with some of her treats. If I ever lose my job in the food world, our engineer at the recording studio assured me I just might have a future in over-dubbing adult films. Take a listen.

Have a question for Joanne about Flour the cookbook or Flour Bakery? Or want to leave her a message? You know what to do below.