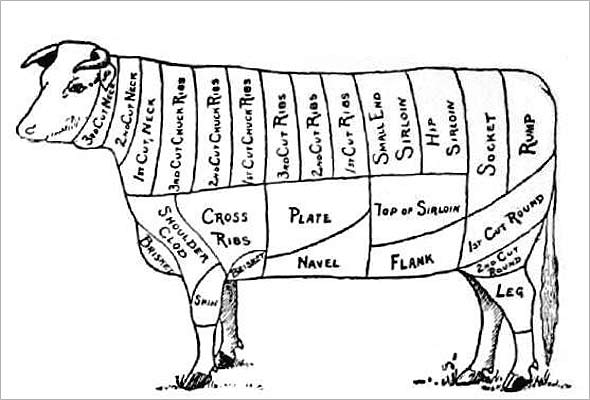 We were in the kitchen when my husband casually mentioned that a local rancher who raised a few cows on a hillside pasture sometimes had beef for sale.

I wrinkled my nose. I couldn’t imagine craving meat, regardless of where it’d been raised or what it’d been fed. I sprinkled slivered garlic and chopped steamed spinach over our pizza dough and waited for John to arrange crumbled sausage on his half before sprinkling the entire thing with mozzarella and feta and sliding it into the oven. Then I thought, Oh, well, what’s a few pounds of meat? I’ve always been willing to cook with it, provided I don’t have to touch it.

“How much beef would we get?” I asked.

Good Lord. I couldn’t recall ever having more beef on hand than a few pounds of hamburger, a roast, and a couple of steaks. If we still lived in the city, I mused, we wouldn’t even be having such a conversation, our freezer had been so small. Where would we have put half a cow?

The move to the country—to become a farmer, to grow grapes—had been John’s dream, not mine. A vineyard? In rural British Columbia? I was, though, enchanted by the notion, envisioning a writer’s retreat. In this fuzzy yet rosy vision, my husband left the house each morning with shovels and hoes while I wrote. Our first winter had unfolded more or less as expected, though the tools were pruners, not shovels. But before spring turned to summer, I began to wonder what on earth I had done. Seemingly overnight the vines leafed out and soared waist-high, then shoulder-high, as did the grass between the rows. In the yard, fruit trees blossomed—cherries and peaches would need to be picked. In the gardens, chickweed and knapweed invaded. In our greenhouse, trays of seedlings—tomatoes, peppers, eggplants, leeks, onions, rosemary, basil—waited anxiously to be planted, watered, and weeded. The next thing I knew, I was learning to drive a tractor. When I did find time to write, well, you’d be surprised, when you live in the country, how often the neighbors drop by.

John and I never discussed the cow again. Then one weekend we attended a local charity auction. I was sipping my second glass of local pinot gris when I was introduced to the rancher. He was wholesome-looking. Mid-sixties, I guessed. We chitchatted about wine, grapes, and life in the valley before the conversation inevitably turned to cows. I should have told him that I hardly know the difference between porterhouse and pot roast. That I detest the taste of meat. That I’m almost vegetarian. That I only sometimes eat fish and chicken. Instead, I heard myself say that I love to buy local and how nice it would be to have a freezer full of beef. He looked pleased and said he’d put me on the list. Apparently people were lining up for these cows.

I meant to tell John later that night that I’d procured a year’s supply of beef, but I couldn’t bring myself to say the words out loud. Life as I’d known it had already changed in ways I could never have imagined. My daily routine. The sanctity of my office. And now I’d ceded control of the contents of my freezer. What next? My very veggie-girl soul?

Summer passed, and then winter, with no word on the meat, and I’d all but put the matter behind me when the rancher called in late spring to tell me my order was practically on the butcher block.

Hearing nothing but silence on my end, he added helpfully, “About 500 pounds of meat.”

Was that the cow, I wondered, or my half of the cow?

“Dressed out?” I stammered.

“That includes cutting and wrapping. It’s $3.30 a pound. It’ll be ready in six weeks, so you’ll need to get the cutting instructions to the butcher before then.”

I thanked him, eased my way out of the conversation, and promised myself I’d work through the math on my own, though I never got around to it.

A week or so later, my beef order form arrived by fax. At the top of the page, under the heading “Custom Meat Cutting and Sausage Manufacturing,” the abbreviations were spelled out clearly. “B” for bone-in cut. “BL” for boneless cut. Several questions were also posed. Carcass weight? Roast weight? Number of steaks per package? The form proceeded to contain 35 cuts in 10 separate categories, arranged the way a restaurateur might set up the plat du jour menu. Cross rib roast OR Cross rib steak. T-bone steak OR New York steak. There were sections for blade roasts and brisket, sirloin and soupbones.

Problem was, I was unsure if the blank spaces beside these cuts on the form required a simple yes or no, or if I was expected to indicate a quantity. And if the latter, how many of a particular part, in total, would a cow possess? How many flank steaks? How many short ribs? How many tenderloin butts?

What’s more, it seemed to me that a woman who bought her beef by the side from a custom meat cutter ought to have an opinion on the merits of inside round versus outside round—or at least know the difference. She ought to know whether she wanted her brisket rolled or whole. She ought to know if selecting chuck steaks would foreclose the option of ordering chuck roasts or if one might ask for both.

I shoved the form to a corner of my desk to be dealt with later. Week after week, my untended task hounded me: Phone the butcher, phone the butcher. I think I saw that phone call not so much as a meat order but as a point of no return. I had mud under my fingernails, wire joiners in my pocket, spear grass in my socks, and 20 liters of liquid seaweed fertilizer in my car. And, it seemed, I had a freezer big enough to hold a season’s worth of cherries and peaches and pesto and still have room for half a cow.

A full year after I’d committed to that cow, with the image in my mind of a meat cutter—saw in hand—awaiting my command, I finally made the call. We had never met, this butcher and I. We chatted for a while about the cold, wet spring. How the vegetable gardens would really take off now that the weather had turned. He had a soothing voice, not at all what I’d expected of a man who hacked up carcasses for a living. I poured a mug of coffee as we talked, wandered out to the deck, and flopped into a chair. I’d been up since early—our bedroom had filled with birdsong at four a.m.—and it was a relief to relax.

As for the beef, when at last I brought up those cutting instructions and admitted I could use some help, the butcher said not to worry about all the paperwork. “I don’t really need the order form,” he said. “Just give me a list of what you like best.”

I thought of the Genovese basil that was already up in our garden, of the season’s first garlic scapes, of the stalks of fresh rhubarb splaying shamelessly in a sunny corner of the yard, of blending the scapes and basil with Parmesan to make pesto for an omelet, of baking a pie with the rhubarb and some strawberries. But to the butcher, I mentioned only ground beef and steak.

Back to Where’s the Beef? on Leite's Culinaria