There was one summer when I had as many figs as I knew what to do with. I was renting a house in Atlanta with a fig tree out front. It actually wasn’t until I was moving in that I recognized the leaves, squat and sweetly fuzzy, like cousins to a maple’s greenery. It was the beginning of June, too early for figs, but I knew that in less than a month that tree would be dripping with Brown Turkeys. Sure enough, it was. And it stayed that way for three months, as though just to satisfy my seemingly insatiable appetite for them.

My obsessive tendencies served me well at that address. All summer, from July through September, I relentlessly stalked that tree day and night to beat the squirrels and bird to the fruit. I ate figs out of hand for breakfast, lunch, and dinner with an abandon I’d never before known. I tossed them with arugula and pine nuts; I made brilliant, excessively figgy tarts with cornmeal crusts; I put up enough fig-lavender jam and fig-balsamic vinegar to last more than a year; and at least once a day I quartered them, drizzled them with Tupelo honey, cracked a little black pepper over the top, and dabbed them with crème fraîche, just because I could. You might think I would have grown tired of such fig gluttony, but I didn’t. I never wanted to leave that house—or that tree.

With fall came the devastating news that the house was being sold. I moved just one street over, but without a fig tree at my disposal, the next summer I did what anyone desperate to score some cheap goods would do: I scoured Craigslist. The figs were usually advertised by elderly couples with too many trees on their hands and a modest appraisal of a perfectly ripe fig’s worth. In exchange for the merest of sums, I would take home flats of Celestes and Kadotas and Brown Turkeys and even some varieties whose names I never learned. I’d fill my Tupperware until figs threatened to spill over the brim. Once, for nearly four quarts, I was charged just $7. (I tried to leave a few dollars more with the owners, but they wouldn’t take it. I sometimes still wonder if I offended them.)

My life in figs continued in this fashion for several years, until I moved north to Washington, D.C. When fig season came around, still with no tree of my own, I searched ads for surplus fruit but found nothing. It certainly wasn’t for lack of trees. As I drove and biked and walked and ran, I was struck by how rich in figs this city is—so many trees in yards, alleys, even the green space abutting sidewalks: Black Missions, sweet and faintly spicy; nutty, honeyed Brown Turkeys; Blond Kadotas, their juices a floral nectar. Such wealth, and none of it spread around!

Eventually I did what seemed, at the time, only logical: I mapped the city’s fig trees on Google Maps. I remembered having read that in some city or another, fruit was considered publicly available if the branch from which it was suspended was veering over city property, a sidewalk or an alleyway. I didn’t bother to verify whether this notion applied to the District of Columbia. I just began to map trees whose boughs were within reach of passersby, egged on by the annoyance that prickled me every time I spied figs gone to waste on the ground. 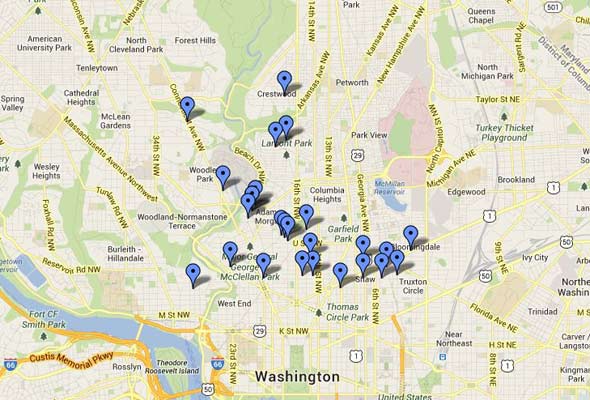 At first this exercise served to fuel only fantasy. But by midsummer, with no reliable source of figs save the half-pints I could purchase for an exorbitant fee at the farmers’ market, I began to feel a void that I was at wit’s end to fill. I suppose I could have settled for figs in moderation, but where was the joy in that? I’d known gluttony in figs. I couldn’t fathom anything else. Besides, my map suggested I was agonizing over nothing.

I don’t blame the figs for what happened next. No, I blame my mother, and the impeccable rationalization skills in which she schooled me. Presumably, she also taught me not to steal, yet that’s not what I recall all these years later. Rationalization, I learned, is being flexible in how you interpret moral tenets. It’s convincing yourself that taking someone else’s figs without asking is perfectly sound as long as you want the fruit badly enough, or the tree is clearly so prolific that its owners couldn’t possibly put all its fruit to proper use. Further, if it looks as though the figs on the tree in question are likely to fall to the ground and languish, or are going to the birds, you’re practically obligated to take them. I also learned that if you replace “stealing” with a cute euphemism, it no longer feels lawless, as long as you don’t think about it too hard.

Thus figging became part game, part routine. When I happened upon a tree that seemed neglected, I helped myself to a few (sometimes, I’m sorry to admit, a few too many). I made a habit of bringing plastic containers or egg cartons with me wherever I went, in case I happened upon a particularly fruitful tree. I scrawled mental notes regarding which trees bore the most yielding fruit and which had the most honeyed juices. I drafted loose rules to keep myself off private property, and I stuck primarily to trees weighty with fruit and so casually attended that the ground below was littered with sticky remains. In my mind, owning a fig tree was a privilege; failing to wholly appreciate its bounty was irresponsible. Reckless, even. I was simply righting this injustice. I sustained my fig habit in this way for a few years.

I regarded the ethical implications of these practices with remarkable aloofness. The owners of these trees could be out of town, I thought, or behind on collection duties because life had presented other distractions. At the least, I wanted these figs more than their owners did, surely. Still, I avoided figging during hours when tree owners were likely to be coming or going—I was comfortable enough with my rules, but I was doubtful that the world of fig-tree owners would be receptive to my logic. That each tree was a discovery, that securing the figs involved a necessary amount of risk, seemed to sweeten them all the more.

Then one afternoon last year, stealing figs from a tree just blocks from my house, one foot perched on a stone wall and an arm stretched toward a heaving branch, I heard a voice, not unkind in tone, say, “You can take a few, but don’t take too many.”

My adrenaline plunged into free fall, and blood rushed to my face. I froze and trembled with a terror not unlike the worst kind of stage fright. For the first time in all my fig-foraging escapades, I felt the full force of what I was really up to.

I’d never considered myself a petty thief. Actually, I’d always thought myself quite well behaved. Growing up, I only sometimes fought with my sisters, never threw gum wrappers out the car window or smashed pumpkins on Halloween, only on rare occasion told lies (and even then they were little white ones), and cheated just once: on a test in the second grade, when I peeked at the multiplication tables in the front of my spiral notebook (7 x 8 = 56). Stealing anything—whether a pack of gum or lacy underthings—had never seemed worth the risk of getting caught.

Yet here I’d reasoned that having figs was worth so much that I was willing to risk having my fig-thieving ways found out. Now, existing within that consequence, my conviction wavered. These figs weren’t just fleeting and precious. They were someone else’s.

The owner of the fig tree, not many years older than I, by appearances, had descended the stairs from his front door and walked to the sidewalk where I stood, red-faced and apologetic. At first all I could do was laugh as I fought back tears.

“Don’t be embarrassed,” he said, trying to reassure me. I wanted to drop my egg carton brimming with stolen figs and run. Instead, I tried to give them back, in fact, as apologies gushed from my mouth, but he insisted we talk things out, and we slipped into conversation.

He was a real estate agent with a tremendous love of figs that rivaled my own. Reasoning that every home should have a fruit tree, he had established a habit of planting a fig tree in the yard of every house he sells. His own yard contained six or seven different varieties, including the Adriatic, a golden, intensely honeyed type—his wife’s favorite—which happened to be the variety I had been reaching for when he called me out. He told me I could come back and pick more in a week or so when the other trees ripened. He gave me his email address, scribbled on the back of a business card, and suggested we make fig jam. Then, with a laugh, he said that he wished we’d met 10 years earlier. Later, I would describe my captor to friends as a fig-thief sympathizer. They identified him as a flirt.

I’ll never know his intentions. What I do know is that he never replied to my follow-up email, which could have been a result of the overzealous spam folder he’d warned me of, or perhaps a reevaluation of his initial empathy, or maybe his wife didn’t want to share her figs. Or, I thought more than once, he was trying, in his own way, to put me off fig thieving altogether, in which case he succeeded. Mostly.

Being found out completely snuffed my enthusiasm for fig thieving. For a while, anyway. The rest of that summer, I didn’t even care about figs. They were a reminder of a mindset I was trying to forget.

Time, though, wears away at guilt. Less than a year later, I began spying fig trees again, always with outward exclamation, sometimes cupping my hands to my mouth: Oh my god, a fig tree! I am five years old again. I consider adding these trees to the map, but it’s a lazy, noncommittal thought. I’m committed to this no-stealing thing.

I still feel plagued by insufferable fig envy, though. By late June I am thinking about the figs on my neighbor’s trees, syrup weeping from the seams, except now I remind myself that someone else is anticipating them, too, just to keep myself from disgraceful behavior. I once again take walks to see how the fig trees in my neighborhood are coming along, making detours to those I know well.

But instead of helping myself, I pull out my 15-year-old stationery—it’s ivory, with my initials embossed at the top, a high school graduation gift that has languished, unused, at the top of my closet—and I write letters. At the bottom of my handwritten pleas, scrawled in a combination of cursive and print, I leave my name and phone number. It is unabashedly desperate but evidently charming, as I’ve found an unexpected generosity in strangers who are more than willing to share their good fortune in figs. Some day, I vow, I will once again gorge myself on figs as though I may never see them again, but for now, these gifted figs are enough. And I find myself hoping that one day, when I am finally settled and have a tree of my own, with as many figs as I know what to do with, I may be able to do the same.

Emily Horton is a food writer in Washington, D.C. Her work has been featured in The Washington Post, the Art of Eating, and Vegetarian Times, among other publications. She blogs sporadically at Excessive Garnish.