Homemade cultured butter is easy to make: all you need is heavy cream, yogurt, and sea salt.

As is abundantly obvious to anyone with the slightest acquaintance with my medical records, I’ve never met a buttah I didn’t like. Cultured butter or uncouth. Salted or unsalted; cow, goat, or sheep; French, English, Italian, American; compound or, er, singular.

However, the idea that I could whip up my own homemade butter, that I could play Dr. Frankenstein to a bunch of butterfat globules, was completely lost on me during my formative years. It wasn’t until one lazy afternoon in Pittsburgh, during my sophomore year at Carnegie Mellon University, that I became aware of the possibility that is homemade butter.

I’d recently dropped out of the university’s acting program. Never one to ignore the writing on the wall—in this case a report card with enough low grades to call myself “Failure in C Major”—I had quietly exited stage left before the curtain was rung down on my acting aspirations by a tyrannical acting teacher whose similarity to Miss Trunchbull, the evil headmistress in Matilda the Musical, cannot be overemphasized. My futon and I, along with my humiliation, had taken up residence in a sunny bedroom in a Squirrel Hill apartment recently vacated by a fellow “dramat” (that’s what they call drama majors at CMU) who had lost the battle with Miss Trunchbull.

Stripped of an identity that I’d clung to for years—that is, future Oscar, Tony, and Olivier Award-winning star—I became one with the couch, exhibiting signs of what I was certain was post-traumatic stress disorder or, at the very least, a debilitating fungal infection from having handled poorly wrapped cheese or wearing unsanitized bowling shoes. The sadness was monumental and unremitting. My days were filled with soap operas (“I can act better than you frickin’ idiots!” I shouted at the TV), game shows, solitaire, laundry, and long walks during which I sat down on park benches, tragic novels in my lap, and wept Chekhovian-size tears. The books served two purposes: 1.) They made me look smarter than I was, and 2.) they acted as a cover for my hysterics. I figured any passerby would be moved by the exquisite pain I clearly felt while reading Anna Karenina or The Scarlet Letter.

My college girlfriend, whom I will always think of as the Original Grace (as in Grace Adler from Will & Grace), tried to get me excited about cooking as a way of giving me something to do during the day while I killed time until my night shift at Gullifty’s restaurant, where I waited tables. One day while my two roommates were at school—one making believe he was a giant porpoise with an inferiority complex in improvisation class, the other deluding himself that he was Vincent van Gogh in art studio—I felt the slightest thrum of motivation.

Somehow I got it into my head that I wanted to make whipped cream. I don’t recall why. It could have been for dessert. It could have been simply so I could tell Original Grace that I’d accomplished something besides being the biggest armchair winner of The $20,000 Pyramid that day. I tramped over to the Giant Eagle on Murray Avenue and picked up a quart of heavy cream. After rooting through the kitchen cabinets, the only whizzing implement to be found in the apartment was the blender my wannabe Van Gogh roommate had brought all the way from Georgia. A whiz is a whiz is a whiz, I thought. So I poured in the heavy cream, hit liquefy, and fetched the basket of rumpled clothes that had taken up residence in the corner of my room, where it doubled as a bureau. (Yes, I had been that depressed.)

I was in the mood for some conversation, so I sat on the top step of the kitchen’s back staircase with my basket by my side and started folding. When my downstairs neighbor heard our door open, she scuffed her chair close to her back door and creaked it open, as she always did.

“YOU THERE?” she shouted up.

During those endless afternoons we’d often talk about cooking, although, oddly, we never got together in either of our kitchens to actually cook. I suspect it’s because one night when I opened my closet I saw her in the apartment below taking a shower. A pipe had burst during winter break and the water had taken down her bathroom ceiling and part of my closet wall. When she looked up, as if she’d heard something, I flicked off the light and stood in the darkness, my heart rattling my chest like a gorilla in a cage. Oh, my God! Oh, my God! I’m going to get arrested, I panicked to myself. I’m a freaking Peeping Tom! All I wanted to do was hang up my shirt!

As I sat on the step bellowing out Duran Duran and the Tootsie soundtrack, folding whites I’d dragged from the Laundromat, I was reminded of my maternal grandmother, Vovó Costa. I told my neighbor how Vovó used to sit on our splintery back porch in Fall River, Massachusetts, her nylons rolled down below her swollen knees, yelling through the screened window to my godmother as she folded clothes that had dried in the backyard on the line just inches above my grandfather’s strawberry patch. Sometimes in mid-June I swear I could smell the sweetness of berries on my T-shirts.

Suddenly I remembered what had gotten me into the kitchen in the first place.

“I’LL TALK TO YOU LATER!” I shouted down the stairs and scrambled into the kitchen as I heard my neighbor’s door close.

I hovered like an expectant father over my creamy newborn. In the blender, though, was an inelegant glump–a giant, deformed blob–floating in a pool of murky liquid. I was appalled. Well, look at that, I thought. The damn store sold cream that was past its time. I picked through the trash bin for the receipt so I could get my money back. When I came up empty-handed, I dumped the contents of the blender into the garbage and stomped off to my room, feeling like the failure I knew I was.

“Oh, silly!” said Original Grace later that night, chucking me on the chin. (She was a big chucker.) “That was butter you made.” I knew she was trying to do the look-at-the-glass-half-full thing, but I was miserable and felt entitled to remain so. I’d figured that, much like a milkshake, whipped cream would keep whipping until I spooned its plush, ivory-colored pillows out of the blender. How was I to know? It’s not like the Internet was invented yet.

Over the years I’d forgotten all about that incident (the overbeating of the cream, not the accidental peeping–I’ll never be able to un-etch that from my neural pathways) until this summer, when I was spending an inordinate amount of time defending the glories of country living to The One, for whom the center of the universe is NYC. I knew I’d better put my DIY money where my mouth was and make as many things as I could myself–everything from mustard and mayonnaise to nonstick cooking spray and butter–to prove my point.

You can make cultured butter in a wooden churn, a bowl with a hand mixer or a balloon whisk, even a jar if you shake it hard and long enough. But I don’t think I’m being elitist by specifying that if you want to make cultured butter my way, you must use a stand mixer. I’m just lazy.  Plus I like to lean my forehead against the mixer and watch the transformation from liquid to solid take place.–David Leite

LC Uh, Is That Buttermilk? Note

When you make butter, there’s quite a lot of attendant liquid left over, which may lead you to ask, “Uh, is that buttermilk?” (That liquid up there in the antique milk bottle.) It actually is buttermilk, although it isn’t the same as the rich, creamy, cultured buttermilk you’ll find in the refrigerator case at the market. Still, if you want to lend a little tang to pancakes, biscuits, and the like, go ahead and use a little of it. 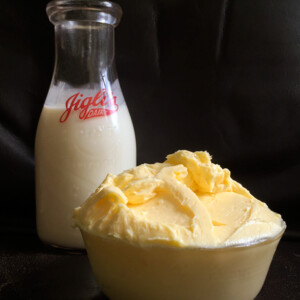