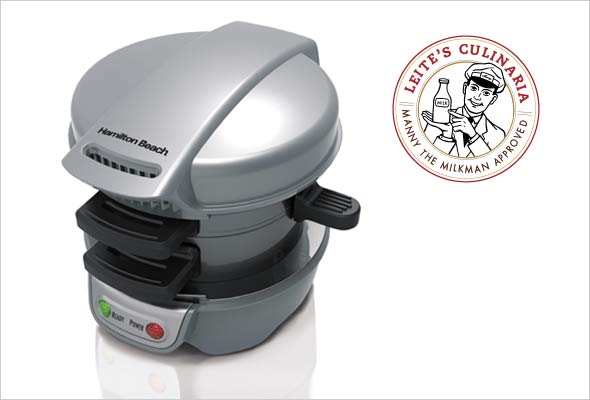 Then I met the Breakfast Sandwich Maker from Hamilton Beach.

As I’ve confessed on several occasions, we frequent McDonald’s. A lot. Like several times a week. (Don’t judge me.) So much so that The One and I began calling it “Chez McDonald’s,” said with a French accent (SHAY meek-doh-NALDS) though after some years we shortened it to simply “Chez,” kind of like the Cher of the fast-food world. Our biggest indulgences are the breakfast sandwiches. Me: Sausage McMuffin with Egg. He: Egg McMuffin. Us: Sausage, Egg & Cheese McGriddle when there’s a 2 for $3 breakfast deal.

Since getting my Breakfast Sandwich Maker in June, though, I’ve gone to Chez a total of two times for breakfast. TWO times! Do you know how incredible that is for me? Because Chez is my crack, and The One is my pusher. Always has been. (Millennia ago, we were driving and he wanted to stop at Chez. I balked—after all, I was a svelte 170 pounds—but finally relented after being worn down by his insistence. That one burger and fries in the middle of nowhere in upstate New York was all it took.)

The Hamilton Beach Breakfast Sandwich Maker is two stacked chambers that cook both halves of your sandwich separately. In the lower chamber goes any bread you want for the foundation of your meal (English muffin, pancake, bagel) along with precooked meat (bacon, ham, sausage) or meat substitute (if you’re so inclined) and cheese. For the healthy among you, veggies also work. In the top chamber goes an egg, sunny-side up or lightly scrambled with a fork, and the top of your bread of choice. Close. Wait five minutes. Ta-da. Homemade Chez. Hot muffin, cheese warmed to just the right temperature to make its corners slump, and an egg cooked perfectly to my liking.

A few customizations I’ve made:

My only complaint is that this is a single sandwich maker. I want a double or quadruple maker, so that The One and I and any guests can face-plant into our sandwiches at the same time while the food’s still hot.

Does this mean I’ll cave and order a banana slicer or radish-flower maker from QVC? Nah. Not when I’ve been endowed with such, um, gifts.