An upgrade to the after-dinner cheese plate, this Gorgonzola dolce with roasted pears combines sweetly roasted pears, sweet-and-spicy walnuts, and a hunk of mild blue cheese. This little plate would also make a fantastic cocktail side.

I rely on Gorgonzola dolce often, partly because it is so versatile, but primarily because I absolutely love the mild, sweet, creamy blue cheese. Anyone with a fondness for blue cheese will gravitate to this lovely cheese, and even those who are not major fans of blues may fall for it in a big way! Dolce is made in Lombardy, near the town of Gorgonzola, and aged according to DOC regulations. If you have a perfectly ripe pear, no need to roast it.–Rick Tramonto with Mary Goodbody 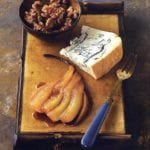 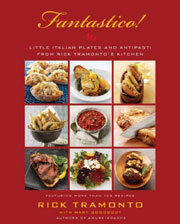 For the spiced walnuts

How To Pick A Perfectly Ripe Pear

How exactly do you define a perfectly ripe pear? Soft? Firm? Green? Brown? It depends. Give the pear a gentle squeeze on its shoulder, the fleshy portion of the pear along the stem. It ought to give slightly but not a lot. Pass over any pear that bears blemishes. And if the pears are piled up at room temperature, take a whiff; you ought to catch the scent of that subtle, intoxicating, sweet pear perfume.