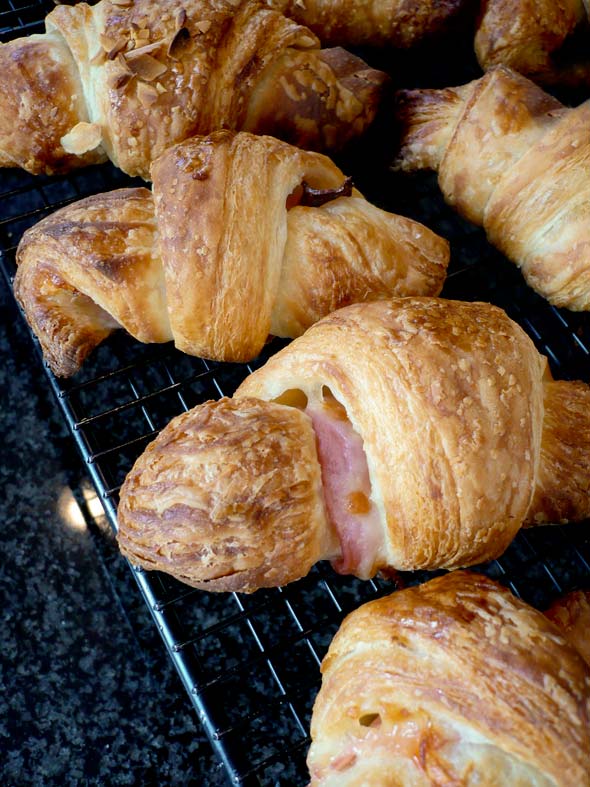 Croissants. Not just any croissants. Freshly baked ham and cheese croissants. And not “croy-santz,” but true, honest-to-god, homemade “krwa-sawhn.” That’s what I’m talking about.

I don’t make croissants nearly as often as I should. For the longest time, I’ve relied upon my dear friend Cindi Kruth. Cindi is one of our recipe testers, as well as one hell of a baker. The One and I went over to her and her husband Martin’s home one Saturday morning last autumn, and what awaited us? These croissants. About two dozen of them, fresh out of the oven. As soon as we walked in the door, she swung around with a rack of these in her hands. I’m not ashamed to admit I ate about six myself. How could I not?

Yes, yes, I can imagine what you’re thinking now, as you look below for a recipe and don’t find one. How much ham and cheese are we supposed to use, David? Why haven’t you included the recipe, David? Are you trying to torture us, David?

Well, kind of. Kidding. Cindi uses a recipe quite similar to our croissant recipe for the dough. By nature a very meticulous baker, Cindi is uncharacteristically loosey-goosey when it comes to cramming her meticulously made dough with jambon et fromage. Still, when pressed, she divulged some of her secrets. “The drier, saltier kind of ham works best in this recipe,” she says. “And I prefer Gruyère cheese.” She says she buys about 8 ounces each to fill a dozen or so croissants. “If it’s too much,” says Cindi, “you can make a ham and cheese sandwich with the leftovers. If it’s too little, well, there’s nothing wrong with a plain croissant.”

To assemble the croissants, when you get to the part of the recipe where you have a counterful of rolled and cut dough triangles, top each little three-sided sliver of dough with a slice of ham and some grated cheese before rolling it. “I place the ham and cheese along the top notched edge,” advises Cindi. Remember, the rolled dough gets another rise, so it’ll expand a little. This means the ham slice doesn’t need to fit entirely within the rolled croissant. A little ham sticking out past the dough is okay and, in fact, yields a nice, crisped nubbin. You don’t want too much of the ham exposed, though, so if it hangs way over the edge of the dough, you may want to cut it to make it fit better. And you want to make sure the cheese is grated on one of those old-fashioned box graters, not those “new-fangled Microplanes,” as Cindi calls them, because you want some heft to the cheese. “And make sure to use no more than 1 to 2 tablespoons per croissant,” Cindi warns. (One of the biggest mistakes she sees her baking students make is overstuffing the croissant dough, only to watch helplessly as the excess cheese belches out the sides.) Then just roll as you would the unfilled croissants, tuck the tip of the dough under, and curve the croissants into the classic shape. [Editor’s Note: You can glam these up a little when you do as New York City pastry chef Dominique Ansel does and use Ibérico ham and Mahón cheese in place of plain old deli ham and cheese.]