In 1876, “Professor” Jerry Thomas published the first-known recipe for the Tom Collins, a cocktail featuring “Old Tom,” a sweetened gin that was popular in the nineteenth century. Mixed in a tall, ice-filled glass with lemon juice, sugar, and soda water, the Tom Collins is essentially a gin-spiked sparkling lemonade perfect for hot summer afternoons.

In the early 1880s, the Tom Collins hoax swept New York, inspiring copycat pranks, tribute songs—and even a cocktail. Several newspapers, including the below account, described the hoax similarly:

“A joker meets a friend and accosts him with ‘Have you seen Tom Collins?’ ‘No, who the deuce is Tom Collins?’ ‘Well, I don’t know much about him, but he says he knows all about you and is telling terrible lies and scandals…'”

The joker then tells the victim to look for Tom Collins at the saloon around the corner, but in that bar and every other one he enters, he is told that Tom Collins has just left. The victim eventually realizes he has been tricked, and the hoaxer buys him drinks.

The game so captured the minds of New Yorkers that it spawned several songs like, “Tom Collins Is My Name,” with its lyrics, “I’m here, I’m there, I’m everywhere / And rather hard to find / So don’t attempt to look me up / Unless you’re well inclined.”–Erica Duecy

We just realized “Tom Collins”—as in the cocktail—is an entry in Merriam-Webster. Love that. 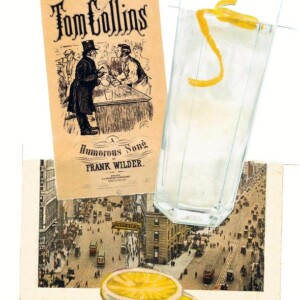 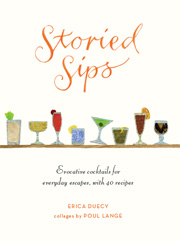 I found this Tom Collins recipe to be quite good. My only previous experiences with Tom Collins came from those bottled mixes back in my younger years. Those memories are mostly a blur, and although I found the flavor of this to be reminiscent, I’m sure that the flavor and quality is much better. The flavor comes across as slightly lemony and slightly tart and definitely refreshing. I used Bombay Sapphire for the gin, and for the first time I made my own soda water using the CO2 cartridges I’ve had on my shelf for years now. That was fun. The pressure point for this recipe is to avoid getting lemon juice in your eye while you’re squeezing the lemon.

In my household, cocktail hour is the time of day to fill each other in on our day or maybe take a little quiet time to read or anything relaxing to sort of wind down from the busy day. Gin is one of our favorite liquors for its floral taste and classic nature. A dry martini is one of our favorites, but occasionally we’re in the mood for something a bit sweeter, like a gin and tonic. I was excited to try a Tom Collins–this is one of those classic cocktails that you’ve heard of but were never quite certain what it was all about. It’s simple in its ingredients, but to me that’s the mark of a great drink. We just picked Meyer lemons from our tree outside, and the mixture of floral gin, lemon juice, and a touch of sugar is a delight. Refreshing and very tasty. The soda water gives it just the subtle bubbliness that this drink craves. I have to say, a Tom Collins will now be in my regular rotation of cocktail hour delights.

This classic Tom Collins recipe deserves a comeback. It’s simple, clean, and fresh. It’s also a versatile cocktail which can, depending on the gin used, express very different flavors. I tried it out with two gins, the first a high rye-style gin from St. Georges which has a much maltier flavor compared to a London dry, such as Tanqueray, the second gin I mixed the Collins with. I believe a good comparison for the St. Georges is a Dutch genever. The two spirits resulted in very different cocktails, both of which were quite pleasant:

The first cocktail was a bit richer than expected with almost a savory note from the St. Georges High Rye. I used the requested amount of sugar, but I feel it was lost in the flavor of the gin, which was fine, as it didn’t really need to be sweet in my book. I think with a gin like this, the garnish could really play up the fun characteristics of the spirit. Maybe something herbal. This is sort of like a wintry Tom Collins.

The second attempt incorporated Tanqueray, and resulted in a brighter, more summery cocktail. It was very refreshing. The gin certainly didn’t overpower the other flavors in this drink. I think it could use a little more of the lemon-sugar mix, honestly. The soda water convoluted some of that sweet-tart flavor.

All around, this is an easy to make and refreshing cocktail. It’d be great for parties.

My husband considers himself to be a Tom Collins aficionado, so of course I had to give this version a whirl. We both thought it was light and refreshing with a pleasant sweet and sour tang. I would definitely make this again with only one alteration—lots of fruit for garnish. My husband always orders his Tom Collins with “extra fruit salad,” and he was craving the cherry and orange slices he loves in addition to the lemon rind. Not true Tom Collins additions, but that’s how he enjoys his cocktail. Cheers!

Looking for a refreshing cocktail? This Tom Collins recipe might be just the thing for you. I’m the first to admit I’m not a big fan of gin, but this drink was tasty, and the gin played nicely in the background taste of the drink. We had juicy lemons and got 1/2 ounce juice from 1/2 lemon. I’d recommend taking your zest strip before you juice the lemons. This drink would be lovely on a warm summer night or a night at home with friends. I think if I were to make this again just for me I might go a little heavier on the lemon juice, but I like a tart drink.

I’d been developing and testing recipes all week for work, and today some things just weren’t working right. Add to that the early darkness, the pouring rain outside, and a couple pots with lots of rice stuck to them soaking in the sink, and I decided I needed a little bit of summer. Enter Tom Collins. Not that it can’t be drunk yearround, but fizzy lemon drinks will always scream summertime. A few measures and a couple big ice cubes later, it’s like I’ve got my toes dangling in the lake while sitting on the dock with my bestest friend.

For years I’ve been drinking Vodka Collins in the summer. I recently decided to revisit the old classic Tom Collins. This drink is the perfect foil to all of the rich, fatty appetizers that one finds at parties. While this may not be a new creation, I believe it deserves to be given a TC just because it is such a classic. This really works well anytime of the year. I would caution that one should use very good gin.