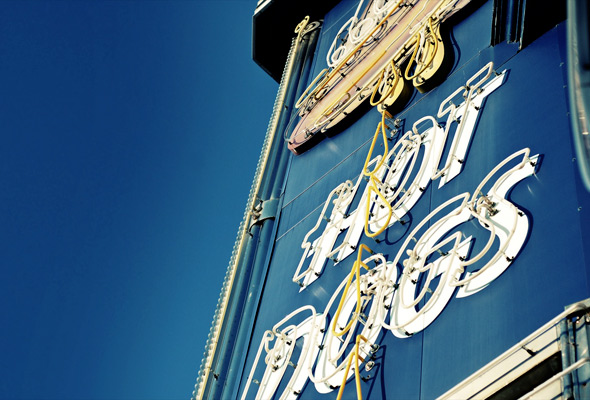 Kathleen Flinn opens this excerpt from her fine new memoir, Burnt Toast Makes You Sing Good, with her dad ferrying a sack of Coney Island hot dogs to his family waiting at home. It was his way of softening the news that they were moving.

Kat (she’s a friend so I can call her that) describes Coney Island hot dogs as a “regional delicacy in Michigan.” Instantly I was hooked. See, not only is Kathleen a fine storyteller, but she rhapsodizes about a food that’s familiar to me—and by familiar I mean familia. My uncles and godfather, whom I called Paneen (my childhood Portglish patois version of “padrinho”), owned a string of hot dog shops called Tex Barry’s Coney Island Hot Dogs back in southeastern Massachusetts. There they doled out the same “chili dog topped with onions and mustard” that Kat mentions in her book. For a moment, I could once again see the red-stained parchment, feel the soft buns wrinkled from the steam trapped by the wrapper, smell the acidic bite of the sauce. That’s how powerful the memory of food can be.

Yet Kat’s prose was stronger than that pull, because it made me want to read on. I trust that any of you who are also hot dog fans, who have suffered the million little indignities of moving as a kid, or who have a penchant for midcentury avocado- or rust-colored shag carpeting will find it equally riveting.​—David Leite

When Dad showed up one Thursday night after work with two dozen Coney Island hot dogs we should have been suspicious. My parents had never brought home takeout, much less famously unhealthy takeout.

Coney Island hot dogs are a variation on a chili dog topped with onions and mustard, something of a regional delicacy in Michigan. Their only relation to the amusement park in New York is that they originated from the sausages sold in buns there.

Dad came into the house with white bags full of the foil‑wrapped Coney Island dogs and two six‑packs of M&S soda pop, which stood for Michigan Supreme, six grape and six “red pop,” a cherry‑ strawberry flavor combination. We never got pop, except at family reunion–type picnics, and then were limited to one each of the inexpensive local brand, Faygo, which could be had for ten cents a can. After everyone loaded their plates with chili dogs and picked out a pop, my parents called us in to a meeting in the living room.

After all those years we’d be leaving the farm.

“It’s a great place,” my dad started, trying to sell us on the spacious new ranch house. “We’ll have so much more space, and hey, there are two bathrooms. Isn’t this great?”

My brothers and sister stared in disbelief. My parents had never even mentioned looking at houses in town, much less buying one.

My sister protested first. “But this is our house! We can’t just move.” The idea was unthinkable.

My brother Miltie would have none of it. He was eighteen. “I’m an adult now. I don’t have to move with you. I could stay here and live in the barn.”

Mom and Dad exchanged glances. They weren’t naïve enough to think that the new house would be a slam dunk, but they didn’t expect flat‑out revolt.

Dad stood up. The discussion portion of the evening was over. “We’re all going to meet the realtor at the new house on Saturday morning. Wait and see. You’re going to love it.”

As promised, Mom and the boys loaded into the station wagon and Sandy and I rode with Dad in his pickup truck. On the drive over, Sandy said she would go along with the whole new house idea if she could have a pony for her fifteenth birthday.

“There’s a shed behind the house, we could probably keep a pony there,” Dad said quickly. “We’ll take a look.”

The drive from the farm to the new house took about twenty minutes. Covered in white siding with black trim and faux shutters, it had a stately look for a modest ranch‑style home. By comparison to the farmhouse, though, the place felt huge, an oversized rectangle with an attached garage. We pulled up and parked in the driveway. Dad got out and waved to Milt, who pulled the station wagon up behind him. Sandy helped me down from the truck. “It looks like a rich person’s house,” she observed.

Once inside, it had a classic Midwest rancher layout. The first room we entered was the small living room that extended into a dining room with sedate avocado‑colored carpeting. “This is the formal living room,” Dad said enthusiastically. Then he led us to an oversized family room with blood‑orange shag carpeting and wood‑paneled walls with a door that shut it off from the rest of the house. It even had a window air conditioner. “Isn’t this great? You kids can entertain your friends in here.”

The kitchen was decked out in the latest fashion: bisque appliances and robin’s egg blue cabinets with gold‑speckled Formica counters. “Look, Sandy! A dishwasher!” Mom said, pulling down the creaking door. “Plus drawers! Six of them!”

The place had three bedrooms, including a generous master with its own bathroom. The kids looked on dubiously.

“We thought the boys will have the master for now, and you girls can share,” Dad said. The kids looked on without comment. Dad took it as agreement. “Okay! Let’s look at the backyard!”

The backyard was big, about a half acre, but it felt tiny compared to the farm. “It’s a good size for being in town,” Dad explained. “There’s still space for a garden.”

“Where are we going to put the chickens?” Mike asked.

After everyone had looked around, we piled back into the cars. Then we did something incredible. They took us out to dinner.

We never ate out. On the rare instances we got burgers at the A&W or fifteen‑cent hamburgers at McDonald’s in Flint, we all ate in the car. That day, Mom and Dad casually walked into a fish‑and‑chips place. We got menus. Dad told us we could get anything we wanted. Sandy ordered fried frog’s legs. My brothers selected the fried whitefish with fries. I ordered the chopped steak, a dish in which a piece of cooked sirloin is chopped and tossed with onions and mushrooms. Mom and Dad both ordered surf and turf, steak with grilled shrimp. Mom ordered a glass of red wine.

It was as if we’d gone undercover to invade some enemy territory. Rich people bought new houses. Rich people ate in restaurants. If there was one thing we embraced about our collective identity growing up, it was that we were poor farm kids, the ones who sat in the brown bag lunch ghetto at school with the awkward sandwiches made from homemade bread and cheap olive loaf. My brothers still joke that they spent most of their school years wearing underwear with someone else’s name written inside, the result of Mom’s thrift store shopping. But we didn’t mind. There was always plenty to eat.

Kathleen Flinn is the author of the bestselling memoir The Sharper Your Knife, The Less You Cry. A writer for more than 20 years, Flinn has had her work published in more than three dozen publications, including the Chicago Sun-Times, The Globe and Mail, and Waitrose Illustrated. Her current book, from which the above was excerpted, is The Kitchen Counter Cooking School: How a Few Simple Lessons Transformed Nine Culinary Novices Into Fearless Home Cooks, which was awarded the 2012 Best Non-Fiction Memoir/Autobiography from the American Society of Journalists & Authors.