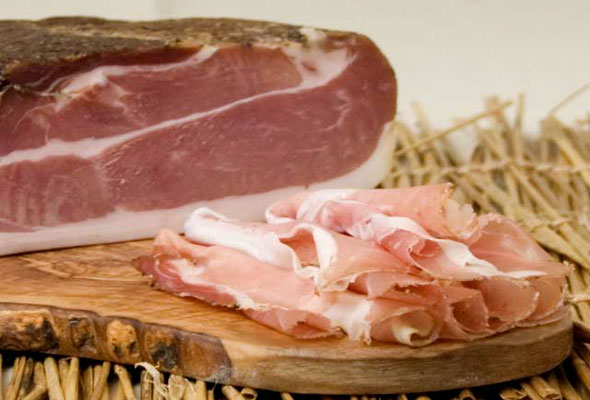 Last October, Sonja Profanter stood smiling in the crisp Alpine air, her cheeks as shiny and round as the local apples. Six foot tall in her socks, she was easily dwarfed by the jagged Dolomite peaks behind her. But the massif to her side was another story: it was about eight feet tall, and made of speck. Some 150 lightly salted and smoked hams had been carved into 1,276 pink and white marbled rectangular chunks, and Sonja was beaming at the gleaming majesty of Speck Mountain while sporting her new tiara. Just minutes before, the 26-year-old clarinetist and skiing- and hiking-enthusiast had been named Speckköningin, or the new speck queen. 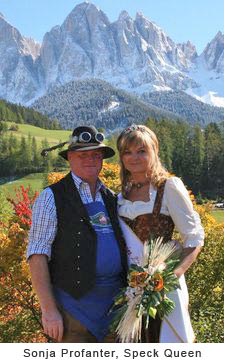 Like its towering cliffs of rock and glistening crags of pork, Italy’s South Tyrol is a Land of Contrasts. Wedged up against the Austrian border like an apple slice inside a strudel, this area was Austria-Hungary before falling to Italy in 1919. For the next 20 years, Mussolini did his best to Italianize it. Even today, every town and stream has two names: one in Italian and one in German. Of the Südtirol’s half-million people, some 28 percent speak Italian as their first language and call the area Alto Adige, but to hear ruddy, blond-haired Italians in their best lederhosen and dirndls sing the praises of their beloved speck is as much a spectacle of the local pride.

On the broad stage of the 2008 sixth-annual Speckfest in Santa Maddalena (St. Magdalena) in Val di Funes (Vilnöss), Herr Doktor Franz Mitterrutzner, director of the Südtiroler Speck Consortium, congratulated Sonja and then told the assembled crowds: “Thousands of people here make speck in their houses, and we defend ourselves against any imitators. We tell them that speck comes exclusively from the South Tyrol! And we say this especially to our Italian friends, who might be lovers of prosciutto di Parma or San Daniele!”

Indeed, if the South Tyrol has one heraldic emblem — besides its 400 castles — speck is it. All cured hams are not the same, and the Speckköningin and Speckgeschäftsführer (Dr. Mitterrutzner in his formal position as consortium director) want to assure you this. In northern and central 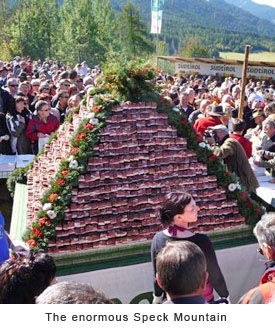 Europe, ham is smoked long and hard with highly resinous wood; that’s what gives Germany’s Black Forest ham its smoky taste. In southern Europe, preserved meats are salted instead, and you can taste that saltiness in every bite of prosciutto or jamón serrano. But speck is an amalgam of the two curing methods, just as you’d expect in a place where Campari-sipping bobsledders have names like Guglielmo Scheibmeier, Gerda Weissensteiner and Günther Huber.

While genuine speck is Italian, few Italian ham legs can escape their destiny of becoming prosciutto. So speck hams today are outsourced through Europe, mostly from Austria, Germany, Holland, and Denmark (compared to prosciutto hams, speck hams are leaner). In the South Tyrol, speck-making dates back at least as far as the 13th century, with recipes and techniques passed down by father to son, although there’s nothing quite so paternal today as the regulatory codes of the European Union.

Speck starts as a lean boned haunch, branded with its place of origin and first production date. Next, those legs are hand-rubbed with salt and spice (spices differ from maker to maker, but generally include secret ratios of juniper berries, pepper, pimiento, laurel and rosemary). For three weeks, the hams are turned periodically as they absorb their spices, before being moved into a smoking room. But unlike the smoky-flavored northern and central European hams, South Tyrolean speck is smoked using low-resin woods like beech, in rooms kept below 68 degrees, where plenty of cool fresh air is drawn inside (air just like what circulated in Santa Maddalena at the Speckfest, although minus the oompahs and toots of the very able brass band). 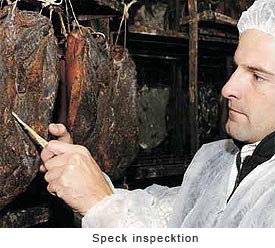 Then aging starts. While a thin layer of mold forms on the surface of the hams — Speckgeschäftsführer Mitterrutzner further clarifies that speck is the only raw ham in the world in which mold is part of the production process, but humbly asks you to forget this while eating — the speck ages for 22 weeks in cool, humid rooms, where it loses more than a third of its weight. Then the mold is washed off, a five-person team comes to inspect the hams, and brands the legs four times more to show they’re ready to swallow up. Your typical speck leg weighs 10 pounds at the end of the process, and about 2.2 million of them are made in the South Tyrol each year. The real McCoy is South Tyrolean Speck PGI, or Speck Alto Adige IGP (for “indicazione geografica protetta”). The rest is 100-percent ersatz.

When you taste speck, there’s an immediate absence of heavy salt or smoke, a delicate porkishness and sweetness fused with a bottom layer of creamy fat. Unlike prosciutto, you can cut speck just with a knife, into cubes, slices, or little sticks. But you can also shave it with an electric slicer, and never have to worry about motor-wrecking, shrapnel-spraying bone. Similarly, Dr. Mitterrutzner wants you to know that speck’s a valuable source for protein, iron, calcium and various vitamins B. But that’s not the point. 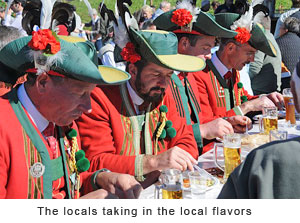 The point is standing before Speck Mountain at Speckfest, in what also happens to be the oldest German-speaking winemaking area in the world (the indigenous Rhaetians, who still speak Ladin, were the first to store wine in wooden barrels ringed with iron hoops, instead of using animal skins or amphorae). The point is drinking the local wine — or beer, or grappa, or fresh apple cider — and applauding the new Speckköningin, who now stands flanked by Miss Südtirol and Hans Mantinger (a.k.a. “Glacier Hans,” who wears glacier glasses wherever he goes and is revered in the South Tyrol for the virtuosity he brings to cutting speck, especially when an accordionist plays by his side), and the omnipresent Dr. Franz Mitterrutzner, who wants speck appreciated on an international level, and whose own lederhosen looks so smart it could have been tailored by Ferragamo. The point is standing amid the throngs in October, with a speck panino in your stomach — unless you’ve opted for the Tyrolean gnocchi sprinkled with speck, or speck bread dumplings, or simple roast potatoes with slices of speck — and taking a deep breath of Alpine air and looking past the hubbub at the silent Dolomites, which assume a rose-hued tint at the end of the day, and then thinking: I’ve got to get some of this speck into my pockets, I’ve got to get little cubes of it into the toes of my socks, or slices into my jacket’s lining, I’ve got to shave it thin and wrap my bare skin with glistening speck until I’m a mummy, like 5,300-year-old Ötzi the Iceman, who was found in the South Tyrol in 1991 and now looks like a humanoid slab of speck, himself. The point is thinking all this as the brass band plays its incantatory anthems, Sonja Profanter thanks you with her ready smile before a rustling South Tyrolean flag, until speck is the only thing on your mind, and on your palate, until you feel yourself emerging from the throngs and onto the stage, because you realize, finally, there is no Speck King.

© 2009 James Sturz. All rights reserved. All materials used with permission.

James Sturz is a food, fiction, and travel writer based in New York. He is author of the novel Sasso, set in southern Italy, and contributed to Italy: The Best Travel Writing from The New York Times and Best Food Writing 2007. His articles, essays, and stories have run in more than 70 publications, including Travel + Leisure, Outside, The New York Times Magazine, The New Republic, Playboy, Afar, Alimentum, Saveur, and McSweeney's.