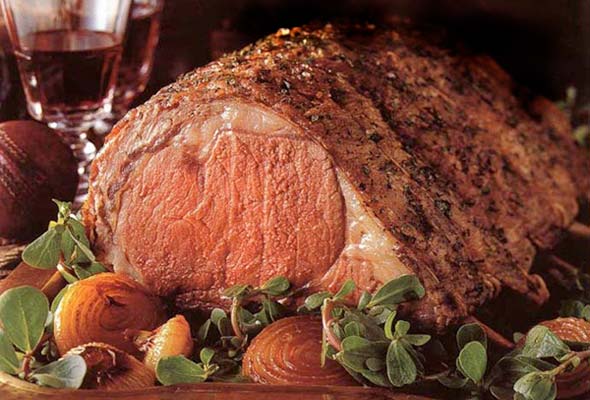 When on Christmas morning Scrooge wanted to mend his ways, he sent an errand boy to buy the biggest turkey available, “not the little prize turkey, the big one.” In Victorian times, as today, nothing said holiday like a big roast, and Scrooge’s surprise for the Cratchit family conveys the ultimate in celebration. But how did these long-held beliefs about holiday food take root?

To understand the importance placed upon such types of meals, we turn to French anthropologist Claude Lévi-Strauss. According to him, the fundamental difference between the ordinary meals we serve to our immediate families and those we make for company or during holidays is that everyday fare is boiled not roasted. Going back to at least the Middle Ages in Europe, the large cuts of meat, deemed suitable for roasting were seen only in the kitchens of the most wealthy—at that time, the nobility. Consequently, to offer roasted meat to guests was to confer noble status upon them.

Lévi-Strauss’s notion also reflects the reality of French kitchens at this time: most didn’t contain ovens. For such special occasions as Christmas or the arrival of honored guests, large stuffed birds or carefully larded haunches would be carried to the local boulangerie, or bakery, for roasting in the huge, bread-baking ovens. In light of this, I would argue that it isn’t the cooking method itself, but the extra effort expended that indicates the higher status of special-occasion meals.

One of the primary functions of holidays is the promotion and affirmation of group cohesiveness. The shared memories and rituals that define our families—and our societies—are renewed and restored during the preparation and eating of traditional foods. The essential ingredient in any Thanksgiving meal is its invariability. Other holidays, like Christmas, allow for some experimentation, but the Thanksgiving meal is a ritual that must be performed with absolute adherence to a family’s traditions.

It’s curious then that the menu for Christmas dinner, a mere month after Thanksgiving, often repeats certain foods. Some items appear on both menus precisely because they’re family favorites, but others take their place on the table due to societal traditions that extend farther back than the immediate generations. For example, many details of American Christmas celebrations are based upon English models such as the Yule log, the repetition of seasonal songs, and, of course, the annual retelling, or re-televising, of Dickens’s A Christmas Carol. But because the English don’t celebrate the American Thanksgiving feast, a roasted turkey at Christmas isn’t redundant in England as it is stateside.

In addition, though the pairing of sweet and savory on the same plate is unusual—the English usually keep them separate—it isn’t unknown. During the Middle Ages and the Renaissance, immediately preceding the age of exploration and the colonization of America, such sweet-savory combinations were common. So if your Christmas meal is intended to serve as a ritual reenactment of ancient ways, cranberries make perfect sense. In western tradition, only roasted meats are normally served with a sweet side dish: leg of lamb with mint jelly, glazed ham with pineapple, or roast goose with red currant jelly. While these aren’t always holiday meals, they’re generally reserved for special occasions. Likewise, it should be noted that these celebratory meals often end with another ancient pairing of sweet and savory, fruit and meat: the mince pie.

In recent years, the pairing of fruits and meats has become more common, largely because of the increased popularity of non-European cuisines. The Chinese, for example, don’t usually save room for dessert because each of their dishes balances the four basic flavors: sweet, sour, salty, and bitter. Most Americans order sweet-and-savory dishes at ethnic restaurants, and they’re beginning to enjoy them at home as well.

Perhaps in keeping with this broadening of the American palate, and of a more general interest in our history and cultural genealogy, adventurous cooks are experimenting with much older cuisines. Historical re-enacters strive to create “authentic” foods at mock Revolutionary and Civil War battles, and members of Society for Creative Anachronism reproduce as accurately as possible the cooking of the Middle Ages and Renaissance.

The image of ancient eating habits is changing. Most of us now know that historic meals didn’t consist solely of gruel for the peasantry and giant haunches of roasted game for the royalty. The food of the Middle Ages and Renaissance was rich and varied with exotic ingredients, elaborate preparation and presentations, and a level of conspicuous consumption that could be the envy of today’s fashionable foodies.

Just as our knowledge of our kitchen heritage is increasing, today’s cookbooks are beginning to look for ways to incorporate that knowledge into modern cooking. A perfect example is Francine Segan’s book, Shakespeare’s Kitchen: Renaissance Recipes for the Contemporary Cook. Ms. Segan has sought out period recipes, which she includes, but rather than slavishly re-creating them, she’s made them anew for modern tastes. This isn’t geographical, or cultural, but rather chronological-fusion cooking. This is our own culinary heritage, revived and recharged after 400 years.

What better way to celebrate Christmas and reconnect with our collective past than by making some classic English recipes? The extra effort spent on these dishes communicates to family and friends that they’re special and honored. It says, as did the Bard of Avon in As You Like It, “Sit down and feed, and welcome to our table.” However, in keeping with modern tastes, let’s set aside the huge steaming roast—with apologies to the reformed Scrooge—and revisit some ancient treats, at once savory and sweet.

© 2009 Gary Allen. All rights reserved. All materials used with permission.