This year was a banner year for books, as far as LC is concerned, even though, according Amazon.com, there were approximately 2,400 fewer cookery books published this year as compared to 2007. But unlike during 2007, when we had a bit of a difficult time coming up with our top 20 best cookbook picks, we had no problem this year. We found the cookbooks we liked most broke down in two three major categories, mimicking some important trends: world food; comfort food, including baking; and professional and chef cookbooks.

At the very top of our list of world food books are Secrets of the Red Lantern by Pauline Nguyen and Olives & Oranges by Sara Jenkins and Mindy Fox. Both locales, Vietnam and the Mediterranean respectively, still luretourists and food enthusiasts. Both books delve into the cultures, offering up authentic, but not intimating recipes for the home cook.

Everyone and their cooking-school-attending brother has predicted that with the economy in the spittoon, we’re all going to go crazy for comfort food—just like we did after 9/11. And we agree. Around here, many of us are digging into mac and cheese (but gussied up with truffle oil or lobster), braises, stews, and every type of mashed potato imaginable. Some of our top picks were way ahead of the curve. (After all, they were written at least 1 1/2 years ago.): Flo Braker’s Baking for All Occasions, Jacques Torres’ A Year in Chocolate, Lynne Rossetto Kasper and Sally Swift’s The Splendid Table’s How to Eat Supper, and Screen Doors and Sweet Tea by Martha Hall Foose, which serves up its comfort wrapped in Southern hospitality. Martha Stewart’s Cooking School by—who else?—and Bakewise by Shirley O. Corriher give the lowdown of the how’s and why’s of cooking and baking, but in our mind, still fit nicely under the rubric of comfort. Just look at some of those recipes…We include hilarious and biting Eat Me: The Food and Philosophy of Kenny Shopsin in this category. Sure you can cook from the book, but why? It’s an arch diatribe with recipes that slaps you in the face and made David laugh so hard, he forgot—for a while, at least—how much his IRA has tanked during the past few months. That’s comfort.

For the honor roll, we have to give credit to a few other authors who took a step back to simpler times and to deeply satisfying meals. First there’s Ina Garten’s Barefoot Contessa Back to Basics: Fabulous Flavor from Simple Ingredients. In her signature style, she pares things down to the essentials, doing away with anything too chefy or complicating, yet still keeping things tasty. Right alongside is Virginia Willis, who penned Bon Appétit, Y’All: Recipes and Stories from Three Generations of Southern Cooking. In the book, Willis combines her Southern heritage and lessons learned from the idiosyncratic women in her family with her formal education in French cooking. The result: good, down home comfort food worth tucking into. And rounding out this heaping pile of comfort-food books is Anne Bramley, creator and host of the podcast EatFeed and the author of Eat Feed Autumn Winter: 30 Ways to Celebrate When the Mercury Drops. In it she tackles the challenge of eating seasonally—when farmers’ markets are shuttered and out-of-season produce is looking wan.

For every action, there’s an equal and opposite reaction, as the physics dictum goes. And as simple and pared down as the above authors take things, some chefs and writers like Grant Achatz in Alinea, Thomas Keller in Under Pressure: Cooking Sous Vide, Nate Appleman in A16: Food + Wine, Heston Blumenthal in The Big Fat Duck Cookbook, Hugh Fearnley-Whittingstall in River Cottage Cookbook, David Tanis in A Platter of Figs, and, of course, Ferran Adrià in A Day at el Bulli have embraced the seriously heavy (in weight, that is) and sometimes very imposing restaurant/chef books. (So, too, have runners-up David Waltuck, author of Chanterelle: The Story and Recipes of a Restaurant Classic, and Joel Robuchon, the force behind of The Complete Robuchon.) If there was one trend worth noting in 2008, it was the dominance of chef books. Certainly, they’ve been around for years, but it seems as if they’ve reach critical mass. It’s partly due, no doubt, to the education of the home cook through programs like Gourmet’s “Diary of a Foodie.” Many of us are more informed—and our kitchens are more kitted out—than ever. So geared up and gadget hungry are we—especially men—that an article in the Sept. 15th issue of BrandWeek discussed a study that coined the term “gastrosexual,” males aged 25 to 44 who are upwardly mobile and panting for anything with plenty power, lots of stainless, tons of do-dads and, preferably, a chrome automobile brand name emblazoned on it, such as Peugeot. Their goal? To seduce the opposite sex.

Of all the chef books, Keller’s, a tome about sous vide, makes the most seductive case for these kinds of books; in his case, why we should be cooking our food encased in plastic and submerged in water far below the point of simmering. He says sous vide is a cooking method — just like braising, frying, roasting, or blanching, and, like them, is worthy of respect and understanding. Unlike the early days of sous vide—for instance when one of LC’s contributors went to a seven-course sous-vide dinner at a top NYC restaurant only to report, “everything had the texture of baby food”—nowadays chefs like Keller use sous vide as part of the cooking process, finishing them off with traditional techniques to add texture and layers of flavor. It almost makes us willing to shell out the bucks for a machine.

On a different note, we’ve found the category of food narrative or memoir to be a bit lackluster this year. Still, top-notch books by Anne Mendelson and Kelley Alexander struck gold in what, at first glance, seems like ordinary subjects: Milk: The Surprising Story of Milk Through the Ages and Hometown Appetites, the story of the forgotten influential food writer Clementine Paddleford. Anthologies, such as Best Food Writing 2008 edited by Holly Hughes and Eat, Memory: Great Writers at the Table: A Collection of Essays from the New York Times edited by Amanda Hesser do admirable work of bringing as many voices to the reader as possible and take honorable mention for it.

If you’re paying close attention, you’ll notice we haven’t mentioned Fish Without A Doubt by Rick Moonen and Roy Finamore. And for good reason: There’s always an outlier, and Fish is it. It fits neither with comfort food books nor with chef books. It has recipes from different cultures, but isn’t a world-food book. It offers up invaluable information about sustainability, but isn’t a how-to or a how-come book. So we decided to leave it be its own category. Period.

In the course of putting the list together, we looked at our past lists and thought it’d be interesting to share with you the books you’ve been buying this year. Of course, not all of them were published in 2008 (and many of our tops pick for this year came out during the past few months), but we believe it shows where our readers’ heads are these days. As of Dec. 13th, the top 10 best sellers during 2008 according to our Amazon.com sales are:

If this list of books doesn’t point toward a trend in good old-fashioned comfort food and making our own foods, we don’t know what does.

BOOK OF THE YEAR 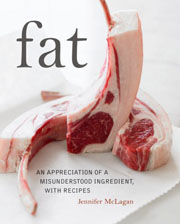 To that point, we’ve chosen Fat: An Appreciation of a Misunderstood Ingredient, With Recipes by Jennifer McLagan (Ten Speed Press) as our Book of the Year. We think it embodies where we as an eating public are—not necessarily where we’re going, or, for that matter, where we want to be. Fat, in all its glories, is an important flavor component in cooking and in the enjoyment of food. And we think it’s refreshing that a book so unabashedly celebrates the one ingredient we (we’re speaking about America, here) have demonized, yet our obesity rate still soars. If we heed McLagan’s advice of moderation (something Julia Child maintained for almost 40 years), perhaps we can delight in what we eat and remain healthy.

The rest of the best

A Platter of Figs
by David Tanis
(Artisan)

A Year in Chocolate
by Jacques Torres
(Stewart, Tabori & Chang)

Baking for All Occasions
by Flo Braker
(Chronicle)

Milk: The Surprising Story of Milk Through the Ages
by Anne Mendelson
(Knopf)