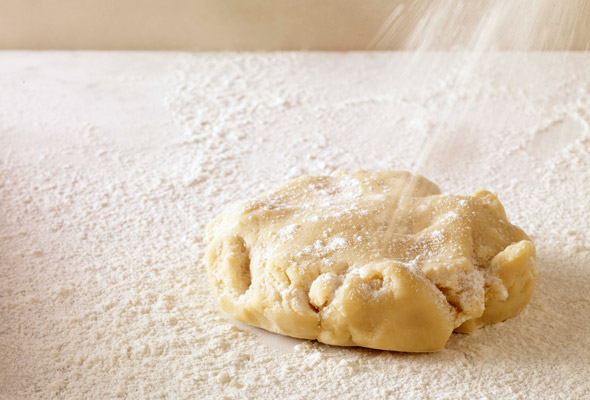 I can sorta relate to Dorie Greenspan. I mean, I make a mean pie crust, although I lack her prowess with pastry. And though I swoon to Paris, I’ve yet to finagle a flat there. Yet in one way, she and I are resolutely alike, and that’s that the older we become, the less inclined we are to do as we’re told. I know this because she copped to it in her recently released cookbook, Baking Chez Moi. I think I’ll be even less inclined to listen to anyone knowing that Dorie also has little tolerance for perceived nonsense, even if it is time-honored baking advice. Actually, perhaps we’d all be a little better off if we asked ourselves, “What would Dorie do?” Starting with how we roll out dough.—Renee Schettler Rossi

For most of my life, I have followed instructions like a good student. This has meant that I made the dough—pie dough, tart dough, cookie dough, most any dough—gathered it into a ball, pressed it into a disk, and refrigerated it for an hour (usually longer), so that the roughly handled dough could settle down before I had to rough it up again by rolling it out.

Gone are those days! As a woman of a certain age, I’ve rebelled and the dough and I are both the better for it.

Dough fresh from the fridge is a bear to roll out. You have to leave it at room temperature until it’s supple enough to roll or, if you’re impatient, as I often am, you have to bash it with a rolling pin until it’s soft enough to roll without cracking. These days, I no longer beat or bash: I roll the dough as soon as it’s made, when it’s softest and most compliant.

When the dough comes out of the mixer or food processor, I form it into a ball, divide it (if necessary), flatten it into a disk (or disks) and place it between sheets of parchment paper. And then I roll. And rolling is a breeze. The key is to turn the dough over and roll on both sides and to lift the paper often, so that you don’t roll creases into the dough.

When the dough is the thickness you want, slide it, still sandwiched between the paper, onto a cutting board or baking sheet and chill it for at least 1 hour (or for as long as the recipe instructs). If the dough is destined to be a pie or tart crust, you’ll need to remove it from the fridge and let it warm up a bit before you can fit it into the pan. Not so if the dough is heading to cookiedom—you can usually cut that dough immediately. In both cases, it’s best to rechill or even freeze the crust or cut-out cookies while you preheat the oven—something I do no matter how I’ve rolled out the dough.

Dorie Greenspan has come a long way since setting her parents' kitchen on fire at age 13. She's now the best-selling author of nearly a dozen cookbooks, including Around My French Table, and a frequent guest on National Public Radio's All Things Considered and Splendid Table. She's also been called a "culinary guru" by the New York Times and received six James Beard and IACP awards. She commutes from New York City to Westbrook, CT, to Paris, France, and back again, never remembering which pantry is out of vanilla beans.