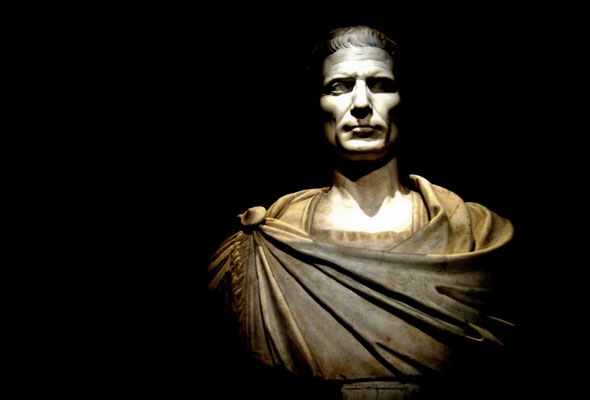 On the fifteenth of March, 44 B.C., Julius Caesar was stabbed to death — not, as Shakespeare tells us, in the Forum, but in what is known today as the Piazza l’Argentina, a block of ruins 15 feet below street level that serves as a sanctuary and adoption agency for the gatti di Roma — Rome’s beloved feral cats. What’s in the Forum is Caesar’s tomb, a simple mound of cement upon which people still leave flowers. This month, in Caesar’s honor, we take a look at Roman cookery — the sorts of things he might have eaten, and the foods his soldiers surely ate.

Until recent times, few authors bothered to write about the lives of ordinary people in classic times. Only heroes and godlike figures appeared in literature. The activities of everyday life, such as cookery, rarely appeared. No cookbooks from Caesar’s time have survived — if they ever existed. However, in the following century, Roman fondness for the good life began to be reflected in writing. The earliest known cookbook is attributed to a gourmet named Marcus Gavius (or Gabius) Apicius, who lived sometime during the reigns of Augustus and Tiberius. The dates are vague because not much is known about Apicius. Indeed, Athenaeus, the third-century author of The Deipnosophitai, knew of three different gourmets with the same name. Our Apicius wrote two cookbooks: the first on sauces, and a later tome that incorporated the first, commonly known as de re Coquinaria (on Cooking). Portions of that combined text have been preserved and are the most detailed representations we have of ancient-Roman haute cuisine.

The Satyricon, written by Apicius’ contemporary, Petronius, provides another view, albeit one that is exaggerated for comic effect — of the eating habits of the rich and famous. Wealthy Roman gourmets gourmands seem to have had an affection for dishes in which the main ingredients were disguised as something else, either as jokes or for metaphoric purposes. In Federico Fellini’s film Fellini Satyricon, the absurdly elaborate feast of Trimalchio (The Satyricon’s ridiculously wealthy poet-wannabe) follows very closely the excesses described by Petronius. And, for once, Fellini’s bizarre tastes seem to have met their match.

However, neither Apicius nor Petronius can really tell us how Roman meals were supposed to taste. While The Satyricon gives us a good idea about Roman presentation, and de re Coquinaria provides the names of ingredients, no measurements for weight, volume, or cooking times are given. Such details, understood by every Roman cook, would have been an unnecessary waste of parchment to contemporary authors.

Fortunately for us, the first English translation of de re Coquinaria was written in 1926 by a cook, Joseph Dommers Vehling. Vehling used the earliest known copies of the book, manuscripts from the ninth century, and applied his own technical skills to the interpretation of the recipes. His may not be the most respected version by scholarly standards, but it does help us understand the food better than later translations.

In reading the recipes, we are struck by four things: the terse, shorthand writing style; the complexity of the methods; the high proportion of meat dishes to vegetable dishes; and the reliance on rare or expensive ingredients, such as flamingo, sow’s udder, dormice, and gazelle. Meat, imported ingredients, and labor-intensive preparations could only be afforded by the wealthy, and conspicuous consumption was a hallmark of the Roman upper class.

Because Apicius generally doesn’t tell us how much herbs and spices were intended, we can’t be certain that the dishes were as intense as the recipes imply, but the following recipe for boiled lobster certainly suggests that the Roman palate was different from ours:

Pliny the Elder’s Historia Naturalis is an encyclopedia of everything the Romans knew — or thought they knew — about nature and agriculture. According to it, malobathron, or malabathrum, is the leaf of Laurus cassia, or wild cinnamon (presumably our Cinnamomum aromaticum, Cassia).

Apicius’ sauce for boiled or roast game is puzzling, but intriguing in its balance of bitter, sweet, sour, salty, and aromatic flavors:

[349] Ius  in  Venationibus Omnibus Elixis et Assis
8 scruples of pepper, rue, lovage, celery seed, juniper, thyme,
dry mint, 6 scruples of flea-bane; reduce all this to the finest
powder, put it together in a vessel with sufficient honey and use
it with vinegar and garum. 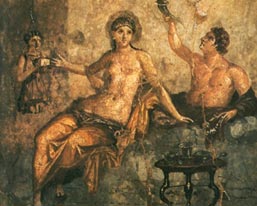 This is one of the few Apician recipes to use measurements, although with characteristic inconsistency. A scruple was a unit of weight, approximately equal to an eighteenth of an ounce. Flea-bane (Inula conyza) is a close relative to Elecampane; like rue, it is extremely bitter. “Sufficient honey” must have been a large amount, indeed, to make up for all that bitterness. Garum (or the similar Liquamen) appeared as an ingredient in most Roman dishes. It was a prepared sauce made of fish entrails and trimmings fermented in strong brine. It is an ancestor to our Worcestershire sauce, but is more closely approximated by the fish sauces of Southeast Asia, such as nam pla and nuoc mam. They provided a savory saltiness in Roman cookery, much as soy sauce does in Chinese and Japanese cooking today.

The green coriander is our cilantro, but the pepper used by Apicius was probably not black pepper (Piper nigrum), but long pepper (Piper longum). It has a more resinous flavor than black pepper, with a lingering burn at the back of the throat.

We would expect to find traces of Roman cooking in Italian cuisine, and there are a few. The diet of Roman peasants and soldiers consisted largely of vegetables and pulmentum, a thick porridge of grains such as spelt, barley, or millet. The dish, later modified by the discovery of a different grain in the New World, survives to this day as polenta. The classic Luganega sausage is descended in a much simpler form, and perhaps in name alone, from the Apician Lucanian sausage:

“Condiment” referred to anything that was used as a flavoring, so it seems especially vague when all of the other ingredients are listed so carefully. Perhaps it was the Apician equivalent of “11 secret herbs and spices” or “special sauce.”

According to Seneca the Younger, who was a trifle younger than Apicius, the great gourmet committed suicide. Apicius poisoned himself upon discovering that his fortune had dwindled to a mere 10 million sesterces (1,500 pounds of gold). Based on today’s gold prices, that equals approximately $5.25 million U.S. Apparently, he was convinced that he would not be able to feed himself in the manner to which he had become accustomed. Life, at least la dolce vita, was no longer possible with such meager assets.

But what about that last salad of Julius Caesar? Apicius doesn’t provide many recipes for dishes we would recognize as salads, either because wealthy Romans didn’t eat them or because they were too mundane to merit inclusion in his book. One thing is certain: No Roman Caesar ever ate a Caesar salad. That is an entirely modern invention created in 1924 in Tijuana, Mexico. The name comes from its creator, chef Caesar Cardini.

Nonetheless, the combination of olive oil, garlic, lemon, and salty anchovies would probably have appealed to the great general. One can almost imagine him congratulating the chef with a play on the last words of the gladiator: “We, who are about to dine, salute you!”

© 2000 Gary Allen. All rights reserved. All materials used with permission.