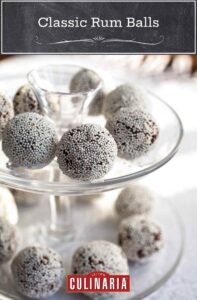 These gorgeous rum balls, made with walnuts, chocolate, confectioners’ sugar, and butter, are a Southern classic. A lovely homemade Christmas gift.

Adapted from The Chew | The Chew: A Year of Celebrations | Kingswell, 2014

Boozy, lusciously chocolate rum balls. They’re all we need to prove the existence of a Dessert God. Rich, chocolatey, nutty, and hard to stop at just one.

Although these are a tiny bit rum-y, there’s no stopping you from tossing in an extra splash. Sin never tasted so good. We certainly won’t tell.–The Chew

It’s difficult not to be smitten with orbs of boozy chocolate, but our testers especially loved that these can be made ahead, were “very quick to put together,” and make an excellent hostess or holiday food gift.

Can I add mix-ins?

Certainly. Feel free to change up the type of nuts, or mix in some crumbled brownie bits or shredded coconut. Alternatively, you can skip the nuts altogether, and just enjoy the irresistible combination of chocolate and rum.

Can I make these in advance?

Yes! We actually recommend that you make them at least a couple of days before you plan to serve them as they do improve with time. They will keep in the refrigerator for up to 2 weeks.

Can you freeze rum balls?

Yes, these can be frozen for up to 2 months. Freeze them on a parchment-lined rimmed baking sheet, then transfer them to a resealable container and store them between layers of wax paper. Thaw overnight in the refrigerator before serving. 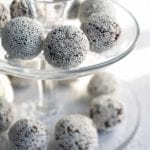 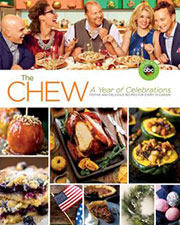 Bite-size desserts are just the ticket when you need something to take to your office potluck. Think about it. Someone might not be willing to commit to a slice of your amazing pecan pie, but a teeny little rum ball? Everyone will go for that.

These are different from other rum balls I’ve had—more truffle-like than cookie-like. I used a 70% Scharffen Berger chocolate, which was very intense. Next time I would dial it back and use a milder chocolate to let the nuts and rum shine through.

Not having any sprinkles on hand, I rolled some of the balls in chopped walnuts and some in shredded coconut. Both good options.

The trickiest part of the recipe was getting the temperature of the chocolate mixture right to roll out. After letting them cool to room temperature, I found that they were still a bit too soft. It was going to be a messy job.

So I chilled them in the fridge for a couple hours, but then they were too firm to divide into balls. I let them warm up just a bit, and they were perfect.

Your hands will warm up and soften the balls as you form them, so you probably want the “dough” to be a bit colder and stiffer than you would think.

Keep in mind when you make these that the rum will not be apparent at first, but the flavor will increase the longer they sit. So try to make them a few days ahead of time to allow them to “age” a bit and reach their full potential. Your friends will thank you for your foresight!

I must say that I had high hopes for this classic rum balls recipe from the get-go. It promised to be very quick to put together and required ingredients that I already had in my pantry. Add the name RUM Balls, and I mean, how bad could they really be?

They turned out to be quite delicious. They were wonderfully chocolatey with a great texture from the combination of ground pecans and sugar.

When it came to forming the balls though, the consistency of the mixture was not what I expected, and I thought I’d screwed something up. I didn’t have the time to let the mixture cool and form the balls on the same day, so I wrapped the mixture and put it in the fridge overnight to set.

The next day, I removed the bowl from the fridge and let it sit on the counter for about 40 minutes to warm up some. When I went to scoop the mix into ball-sized portions, I found it to be quite dry and crumbly, a bit like modeling clay that had been left out too long. I thought perhaps that it was still too cold to work with, so I let it sit until it came fully to room temperature.

That helped a bit, but it was still not very easy to scoop. Nevertheless, I worked chunks of the mix with my fingers and by rolling them between my palms, and they pretty quickly formed into nice, shiny rum balls. While they were still warm from my hands, I dropped them into a bowl of finely shredded, unsweetened coconut to coat and then into a Tupperware for storage.

I would prefer mine with a little more pronounced rum flavor (don’t judge me!), so I may add a little more next time I make them. But even without the extra booze, they’re a totally satisfying treat. Next time I’ll also make sure I have the time to roll the balls the day I make the mixture and see if it’s any easier to do without having them fully set in the fridge.

Back to Rum Balls on Leite's Culinaria