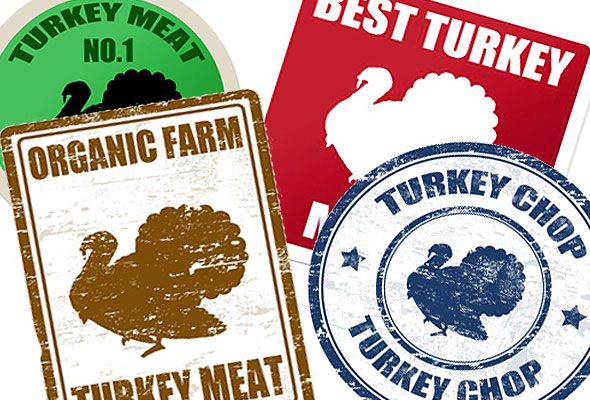 This month, millions of us will find ourselves standing, dazed and confused, at butcher shops, supermarkets, hoity-toity gourmet stores, and farmers markets, wondering how to buy a Thanksgiving turkey. Once again we’ll be confronted, as we are each November, with every conceivable type of turkey, each labeled with terms that may seem straightforward but in fact don’t always mean what you’d think. Fresh. Frozen. Free-range. Organic. Kosher. Natural. Heritage. Self-basting. Wild. With such a litany of ill-defined and largely unregulated information bombarding us, the task of choosing a bird for that holiest of holy food days can range from haphazard to hand-wringing. So I decided to find out once and for all what these darn terms mean and which ones will cause spontaneous choruses of “We’re having Thanksgiving at your house again next year!” from your guests.

“Natural” is a very loosely regulated term for a bird that, technically, contains no “artificial ingredients” or “added color.” This doesn’t mean, however, that the turkey hasn’t been treated with antibiotics. Though the term may seem reassuring, legally, this term doesn’t mean much of anything. [Editor’s Note: Sigh.] Buyer beware.

A turkey that’s labeled “organic” has been certified by a USDA-accredited certifying agency. Very official sounding, right? The term assures that the bird wasn’t treated with antibiotics or raised on a diet containing genetically modified organisms (GMOs). It also assures that the price will be several dollars more a pound than that of most processed birds, though in my experience it’s usually worth it.

A frozen bird is, by law, one that’s stored below 0°F. That’s right. Not the temperature associated with freezing, but well below that. (You’ll find more harrumphing about this below under “Fresh.”) Bear in mind that thawing a “frozen” bird takes some planning. Working backward from Thanksgiving, allow one day in the refrigerator for every four to five pounds of turkey. That means a 16-pound turkey will require four or so days to thaw completely. If you find that you still have a frozen bird-cicle come Thanksgiving morn, no need to call for takeout. Just rely on the fast-working water bath trick. The USDA also offers suggestions for microwave defrosting, but unless you have a nuke box the size of a Fiat 500L, stick with the fridge method. And never, ever refreeze a thawed turkey.

Technically, any turkey that’s been held between 26°F and 0°F can be labeled “not previously frozen.” I don’t know about you, but my Portuguese ass would be more than frozen at 0°F. What do the folks over at the USDA think these turkeys have running through their not-previously-frozen veins? Plutonium?

The simple word “fresh” takes on a complex definition in terms of turkeys. According to the USDA, a fresh turkey is one that’s never been kept below 26°F. I’m not the only one to find this definition evasive. So does Todd Wickstrom, who cofounded Heritage Foods USA as a way of preserving and promoting heirloom foods in America. “Most [Broad-Breasted White, the bird most commonly found in grocers’ freezers] Thanksgiving birds are processed in September and October but are still labeled ‘fresh’ in November, which means they’ve been kept just above 26°F for months,” says Wickstrom. Hmmm. Makes you wonder how “fresh” the turkeys at your local supermarket truly are. Conversely, when most heritage or free-range turkey purveyors use the term “fresh,” they’re referring to a bird that’s been processed within days of your buying it.

These birds—many whose labels you’d recognize, though we’re not going to name names (okay, fine, I’ll just say say what you’re already thinking, which is Butterball)—have been injected with a solution containing butter or other edible fats, broth, water, spices, flavor enhancers, and/or the vaguely described “other approved substances.” The resulting texture can often be mushy. And the taste? I don’t know about you, but I was raised to not say anything if I can’t say something nice.)

If pulling buckshot from your dinner is your style, then sure, go for a wild turkey. Just be warned that it’s going to be smaller, gamier, drier, and quite probably tougher than what you’re accustomed to eating.

A turkey labeled “free-range” has had access to the outdoors. This may summon bucolic visions of rolling hills and pastures, but hold on. Legally, this term doesn’t mean its living conditions weren’t deplorable. It simply means the bird had an egress. To put this in context, many industrial facilities jam tens of thousands of birds together with a single small door to the outside, which is detrimental not only to the birds’ health, often requiring the need for antibiotics, but also to the quality of their shapely legs and luscious breasts. And just because a bird has access to the outside doesn’t mean it will take it. According to Wickstrom, turkeys tend to stay inside if given a choice, regardless of the conditions. You’d never guess that from the term “free-range,” though, would you?

A pasture-raised turkey is reared in pastures at least part of the time, which gives it free reign to amble as it pleases and to rummage for grubs and bugs and other real nourishment that God intended these odd-shaped fowl to nibble all day as opposed to GMO-tainted grains. Turkeys allowed to roam freely and forage for food are healthier and happier (okay, so I’m playing turkey whisperer here, but it’s true) and, as a result, better-tasting. Period.

This is the type of turkey Dave Zier, owner of Zier’s Prime Meats & Poultry in Wilmette, Illinois, sells most often during the holidays. One of the local farmers they’ve chosen to do business with is particularly careful in how he treats his pasture-raised birds—so careful he even goes so far as to slowly walk them a mile and a half to slaughter, a process that’s less stressful on the bird than typical practices and, consequently, turns out a far more tender, tastier turkey. Not all “pasture-raised” birds lead such an idyllic existence. But chances are good their life wasn’t terrible.

Heritage turkeys are the Rolls-Royce of gobblers and my pick for best bird. Once teetering on the edge of extinction, these birds are descendants of the first domesticated turkeys in this country, says Wickstrom. While he notes they have excellent genes, he’s emphatic in his belief that the conditions under which a turkey is raised are as important as pedigree. That’s why heritage birds tend to be pastured-raised. Perhaps just as important is the fact that they’re allowed 26 to 28 weeks to mature, twice as long as it takes factory-farmed birds to reach the same size. All this genetic preservation and pampering assures a deeper, more intense, more distinctive flavor and a firmer texture compared to industrial-grown, chemical-tasting, self-basting birds. “Heritage turkeys are delicious,” says Zier. “They’re like a wild turkey, but not gamey or dry. We have more and more people asking for them every Thanksgiving.”

At up to $10 a pound, heritage turkeys trump the industrially raised Broad-Breasted White variety not just in taste but in price. If you’re a turkey connoisseur and can swing the cost, it’s worth it. White-meat lovers take note: Heritage birds don’t have the generously endowed breasts that supermarkets turkeys do (which, by the way, is waaaay out of proportion to reality—yet another example of our culture’s obsession with big breasts). Granted, you’ll have less white meat, but it’ll be better-tasting white meat. Just eat more mashed potatoes.

A Few More Words On What Size Bird To Buy

Most food folks suggest allowing about a pound of turkey per person and a pound and a half if you have hearty eaters, although Zier advises a whopping two pounds. “If you want leftovers, that is,” he adds. Should that mathematical turn of events mean you’d end up cramming a 24-pounder into your oven, consider instead buying a couple of 12-pounders and roasting them side by side. (Trust us. They’ll cook more evenly. Here’s what else we have to say on the topic.) No matter the size of your bird, bear in mind that those pop-up timers often found on industrially processed turkeys are notoriously unreliable. Not only do they pierce the skin and let flavorful juices escape, but they can malfunction, leaving you to carve an under- or overcooked bird.

A Note on Growth Hormones

Growth hormones occur naturally in all animals. You’ll often see the phrase “no additional hormones” on labels. But, as pointed out by turkey farmer Thomas Kauffman of Ho-Ka Turkey Farms, the use of growth hormones in all turkeys has been illegal since the 1950s. So although it may seem a persuasive selling point when you see it on labels, it’s actually a blanket policy for all turkeys. Stating a non-growth hormone policy sorta implies other producers use them and is a sorta misleading, backhanded marketing tactic.

Got other questions? Relax. We’ve got answers in our Thanksgiving Disasters Averted slideshow. Originally published November 8, 2009.

Have a cooking question, query, or quagmire you’d like us to answer? Click that big-mouth button to the right to leave us a recorded message. Just enter your name and email address, press record, and talk away. We’ll definitely get back to you. And who knows? Maybe you’ll be featured in these pages or–just maybe–on our podcast, Talking With My Mouth Full.

Sources For The Bird

All of these resources provide freshly butchered turkeys.