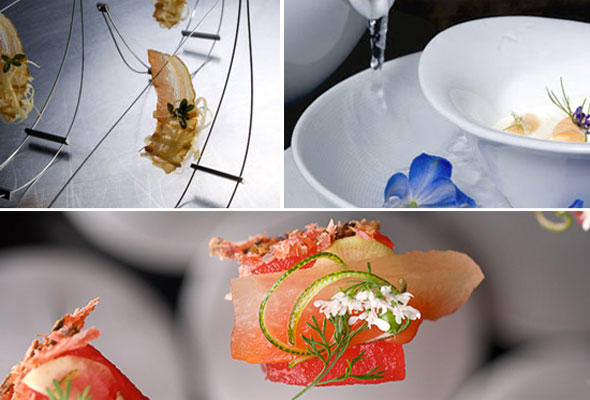 Alinea: the Chicago restaurant declared America’s “Best” by Gourmet Magazine. Four food writers. Four hours. Four gorgeous waiters. At Alinea, the entire waitstaff is beautiful, disturbingly sprightly, and impeccably well groomed. They are not waiters, they are model-waiters. And they know it.

After we’re seated, model-waiter #1 glides over with a wine list, but as we begin to ask normal restaurant questions, he makes it clear that we are not in for a normal restaurant experience. When we ask the price of the wine-pairing option, he says the price is equivalent to roughly three-quarters of the cost of our food, give or take.

Give or take what?, we ask. He’s silent.

We’ve already committed to a $135 experience in molecular gastronomy, so we switch tacks. Kathy asks for a glass of white wine. Model-waiter #1 sends the model-sommelier over. He strikes an intelligent pose and begins a practiced monologue. When he’s finished, he recommends a glass of white burgundy, whose price he estimates at $5 per ounce. We wonder whether they have a drug list for special customers.

I didn’t bother to look at the menu closely ahead of time because the sample menus online read like a Saturday Night Live skit. “CHANTERELLE: carrot, curry, ham.”

Alinea is food theater. Its directors: the waiters. The curtain rises, and a 15-course food tour begins.

Each course comes with a verbal instruction manual, presented by waiters who arrive together in a wave to arrange the food just so in front of each of us. They detail not only what’s in each dish but how to eat it, and where to put the utensils afterward. We are their gastronomical puppets.

The Chanterelle-Carrot Surprise is our first major course. Model-waiter #2, who I’ll call Derek Zoolander, arranges four square plates in the center of the table, each fitted with crisp linen-covered pillows. He nudges, pushes, and taps them until they’re perfectly aligned, so obsessive-compulsive about the procedure that it takes me a minute to realize he’s just giving us forks. He informs us it’s “against the law” to allow silverware to touch the table at Alinea, both because the wood is scratchable and because they’d prefer we don’t put germs in our mouths. When I wonder out loud why a restaurant would install tables not meant to touch silverware, he shoots me his best “Blue Steel.” I have interrupted his flow.

The course comes in a wide, flat bowl. In its center sits what appears to be a shot glass, its inside layered with the chef’s miniature culinary leftovers: puréed and sauteed chanterelle mushrooms; an egg yolk, poached just to its gelling point; sweet, sticky apricot leather molded around solidified Madras curry; a wisp of dried prosciutto; some carrot foam. The waiters swoop down together and remove the shot glasses, which I now realize are bottomless glass cylinders, and the food collapses together in the bottom of my bowl. I am a little girl and it’s Christmas; I want to clap because I appreciate the surprise, but it would be loud and awkward. And, of course, the waiters would not approve.

But the combination works. We groan with pleasure. I want so badly to ask if they do take-out.

Then things get weird. Tall, bullet-shaped glasses appear to be holding some greenish liquid and a Ping-Pong ball. I realize the mechanism I’ve so casually relied on to identify the food before me is no longer working. (I have never eaten a Ping-Pong ball.)

Still strutting, model-sommelier asks for our attention: “Ladies, these balls are bigger than they appear. There is liquid inside them. We suggest you swallow the whole thing in one bite, and close your mouth so that the liquid doesn’t spurt out everywhere.”

I do as I’m told, and yes, the balls are much bigger than they looked. Celery juice goes down first, and right as the sphere — really a cocoa-butter shell infused with horseradish — hits my tongue, it shatters, releasing a cold, sweet Granny Smith apple juice that chases the celery down, leaving the cocoa-butter shell to sag in my mouth like an empty candy wrapper. I force myself to swallow.

“I think Passover just erupted in my mouth,” says Kathy.

For course six, a waiter sticks a long, thin paddle into our conversation. On it, he balances four small cinnamon meringues filled with an ice-cold duck product of dubious legality in Chicago.

“This is really kind of icky,” says Grace. She’s right; it tastes like cinnamon chalk with foie-flavored mochi inside. I decide to leave it after the first tiny bite, but there are no plates, and Derek is glaring at me, lips pursed, so I’m afraid to set anything on the table. I choke it down.

There is more rearranging, water here, plates there. One person has both still and sparkling water, and the waiters keep switching their positions next to her plate. (Ordering the sparkling water required an interview: “Would you like hard bubbles or soft bubbles? Wine glass or water glass?”)

The waiters return, this time bearing big, square pillows, and I’m momentarily thrilled about the prospect of naptime. As they get closer, an unmistakable lavender aroma envelopes our space, and I think how wonderful it would be if one of these pillows arrived in the middle of a transpacific airline flight, instead of on my dinner table where I think my plate should be.

But there will be no nap. A duck course alights on each pillow, and we’re instructed to eat, quick. Each time I cut into the tender duck, the plate rocks under my knife, and invisible puffs of lavender escape from the pillow, flavoring the meat through my nose.

I’m delighted. Kathy disagrees. “This is like eating my underwear drawer.”

This next taste is a tiny flavor grenade. It’s a wax ramekin, filled with cold truffled potato soup. The bowl sprouts a miniature steel pin, on which a butter cube, a piece of Parmesan, a marble-size puff of mashed potato, and sliced black truffle are carefully skewered. Instructions (always instructions): Pull the pin, which deposits everything into the soup, then slurp it all down together. It’s wonderful, the contrast between the hot potato and the chilled soup. I absentmindedly play with the pin, and watch the woman at the table next to me perform voodoo on her bread roll. A waiter notices her and snatches my pin away.

Now this, number 11, one of Alinea’s poster children: a flat piece of applewood-smoked bacon, drizzled with butterscotch and wrapped in apple leather with a sprig of thyme, suspended from a wire as if on some sort of trapeze. The wire is connected on both sides to a semicircular metal frame of what appears to be orthodontic headgear. We’re instructed to rock it back and forth, and as we do so, the meat slides to and fro on the wire. If Calder did bacon, he’d have loved this for his circus sculptures. We wrangle the bacon off the wire, and taste a sweet, porcine bridge between dinner and dessert.

The waiters swagger over again to rearrange our water glasses; they’re playing a game of chess whose rules only they understand. Grace, suddenly rebellious, starts moving the little silverware pillow-plates around, nudging them just off-center, and one waiter nonchalantly returns and fixes everything.

We’re not sure how many courses remain. We’re giddy, overtired, overstimulated, overfed.

Zoolander returns with course 13, the first dessert, something Alinea calls The Antenna. It’s a small stainless steel disk, sprouting a foot-long flexible wire. At the end of the wire is what appears to be a golf ball-sized chocolate hairball, bobbing on the wire as he approaches the table. It’s something I picture my cat producing, but apparently the others make a more anatomical analogy.

He sets the disk on the hip-height table, tilted toward Stephanie so that the wire settles at a 45-degree angle, the hairball wagging dangerously (and suggestively) close to her mouth. She dodges it to avoid losing an eye.

Model-waiter #1 brings three more Antennas, forbids us from using our hands, and stays with Derek to watch us eat. Now we’re actually crying, watching each other fellate a miniature cake shrouded in spun licorice sugar. When I eat mine, I decide to try my best to act casual, but the way he sets my Antenna on the table, running his hand down the entire length of the wire to stop its motion, makes this impossible.

Beyond this, dessert proceeds uneventfully. We offend the waiters by not loving the dehydrated olive oil on Alinea’s version of a Creamsicle — if I want olive oil, I’ll pour it, thank you — but adore the fried caramel lollipops studded with preserved Meyer lemon and speared with giant cinnamon sticks.

Before I know it, we’re hemorrhaging cash and thanking the waiters. Then we’re back in the steely entrance hallway, then out in the night air, and the maitre d’ is opening the door to a waiting cab. I wonder briefly whether I’ll be able to make it back to the hotel without a model-waiter to guide me, tell me how to properly brush my teeth, but I shake my head a little, and it’s over.

© 2008 Jess Thomson. All rights reserved. All materials used with permission.