My mother died suddenly when she was 57, and I was just 31. Aside from some photographs and a few pieces of jewelry, she left very little tangible evidence to remind me of her presence here on earth. But a few years ago, while scanning my shelves of cookbooks for a recipe, I noticed her copy of the The Glasgow Cookery Book and took it down. “Xmas 1942,” read the flyleaf. “Best Wishes from Betty and Mena.” (These were her cousins.) Bound in faded purple cloth, the book had been issued by the Glasgow and West of Scotland College of Domestic Science (Incorporated). I believe Betty may have been a student at “Dough School,” as the place was known. Subjects taught, according to the preface, included “Cookery, Laundry Work, Housewifery, Dressmaking, Needlework, Millinery, Sick Nursing, Hygiene, Book Keeping, Upholstery, Dietetics, and Electricity.”

A look at the book’s recipes reveals just why food in post World War II Britain was rightly regarded as appalling. Cabbage was to be “steamed quickly till tender, 20 to 40 minutes,” cauliflower required 30 to 35 minutes, celery needed steaming 40 minutes to 1 hour (why anyone would cook celery remains a mystery to me), while poor old carrots must be stewed 1 to 2 hours. The entire population had been half-starved for seven years at the time the 16th edition of Glasgow Cookery was published, and so would eat more or less anything, although that doesn’t excuse the ill-advised cooking times dictated for vegetables.

Food in Britain had been severely rationed, so every part of every thing was put to use. The recipe for Stewed Cow Heel and Cow Heel Jelly begins, “If the hoof has not been removed…”  Potted Head requires an ox head plus 100 peppercorns. On the art of making stock, the book thriftily advises that “second or even third stock may be made by re-boiling the bones with more water.” Haggis requires a sheep’s bag and pluck, among other unmentionables, and the recipe instructs home cooks to “Wash the pluck, put it in a pan of boiling water and boil for two hours with the wind pipe hanging out.” Yum. (It should be noted that the centenary edition of the book, published just a couple of years ago, relegates recipes such as these to the introduction due to “changes in health and safety laws” and “shifting public taste.”)

I was nearly 3 years old at the time Mum received Glasgow Cookery. Her early repertoire—fish fillets coated with breadcrumbs and quickly fried; mince (known here as ground beef) stewed with onion and served with boiled potatoes; lentil and potato soups, porridge; scrambled egg; fish pie; stewed apples—had been learned from Granny and could be produced without reference to any book. Over the years, though, she became a keen cook, just as well in a time and place that demanded three meals a day, each served at table with a tatted cloth and starched linen napkins rolled into silver napkin rings engraved with its owner’s initials. Since my father, a seaman, was often away on voyage, Mum made this thrice-daily production for an audience of two: my sister and me. Mid-day dinner, I recall, always consisted of soup, main dish, and pudding, as dessert was known. She never would have considered a deviation, it was simply what was done. Although occasionally in the winter she might suggest “cosy tea,” a much-cherished occasion when we ate cinnamon toast before a blazing fire.

Still, flipping through my mother’s copy of the cookbook, I began to notice recipes that had appeared regularly on the table when I was a child.  She often made Cheese Pudding for tea, which is to say, supper. A baked dish that made glorious use of leftover bread, a little cheese, and only one precious egg, it would serve four or possibly five when accompanied by tea, bread and jam, and, if there was any, cake. Aunt Ness, actually my great-aunt, was famous for her peppery Hare Soup, as in The Tortoise and the Hare. Similar to jack-rabbits, hares were occasionally shot by farmer relatives and distributed ’round the family. The soup was far more flavorful than much of our often bland fare. A superb cook, Aunt Ness knew a thing or two about seasoning, although a look at the recipe reveals why the soup was so good—it calls for Port wine, red currant jelly, and cayenne. Granny sometimes made Queen of Puddings, a thrifty dessert much greater than the sum of its parts, which were breadcrumbs soaked in a mixture of milk, egg yolks, sugar, and lemon zest that was baked until set, spread with warm jam, piled with meringue, and baked again to a “very pale brown.” I recall how pretty it was in its earthenware dish, the yellow pudding surmounted by the line of red jam and pillows of snowy meringue. It was a great treat, and far better than boring Semolina Pudding or scary Sago Pudding with its clear jellied eyes that made me think of frog spawn.

Mum was a more adventurous cook than her mother and aunt, and, as rationing eased in the early ’50s, a regular baker. On the momentous occasion of my ninth birthday—made so by the party she threw for me and some of my classmates—she baked an Orange Cake with Orange Filling and Orange Icing and decorated the top with brightly colored fruits made of marzipan. It exists in memory as the most delicious thing I have ever eaten and, for fear of disappointment, remains unreplicated.

My father, a world traveler, encouraged Mum to continue to branch out in her choice of recipes, and she was pleased to comply. There was roast beef and Yorkshire Pudding, Cornish pasties (he liked to slip one in his pocket for fishing trips), even curries, an unheard of exoticism in those days, served with cooked plain white rice, never before met unless made into a sweet rice pudding. By the time the ’60s rolled around and sophisticated home cooks were eagerly reading about and learning to produce Continental cuisine, Mum’s favorite relaxation was to take the cookbooks of Elizabeth David—and a glass of Scotch—to bed.

My most endearing discovery in The Glasgow Cookery Book, however, came as it fell open, as books do, to a much-used place. I looked closely at page 292, with its greasy patches of page made almost translucent by lard from long ago, and sure enough, the middle recipe was for Parkins, a cookie recipe favored by my father. There was often a batch beckoning in the biscuit tin—dark brown, shaggy, oatmeal cookies, sweet and warmly spiced, each bedizened with half a roasted almond. A few sandy grains of spice clung to the cookbook’s waxy page, the very cinnamon and ginger used by Mum. As this hard evidence of the past came at me across the years, I realized with emotion that the dark smudges on the bottom corners of these pages were, in fact, Mum’s fingerprints, and I felt as close to her as I have in more than 30 years. 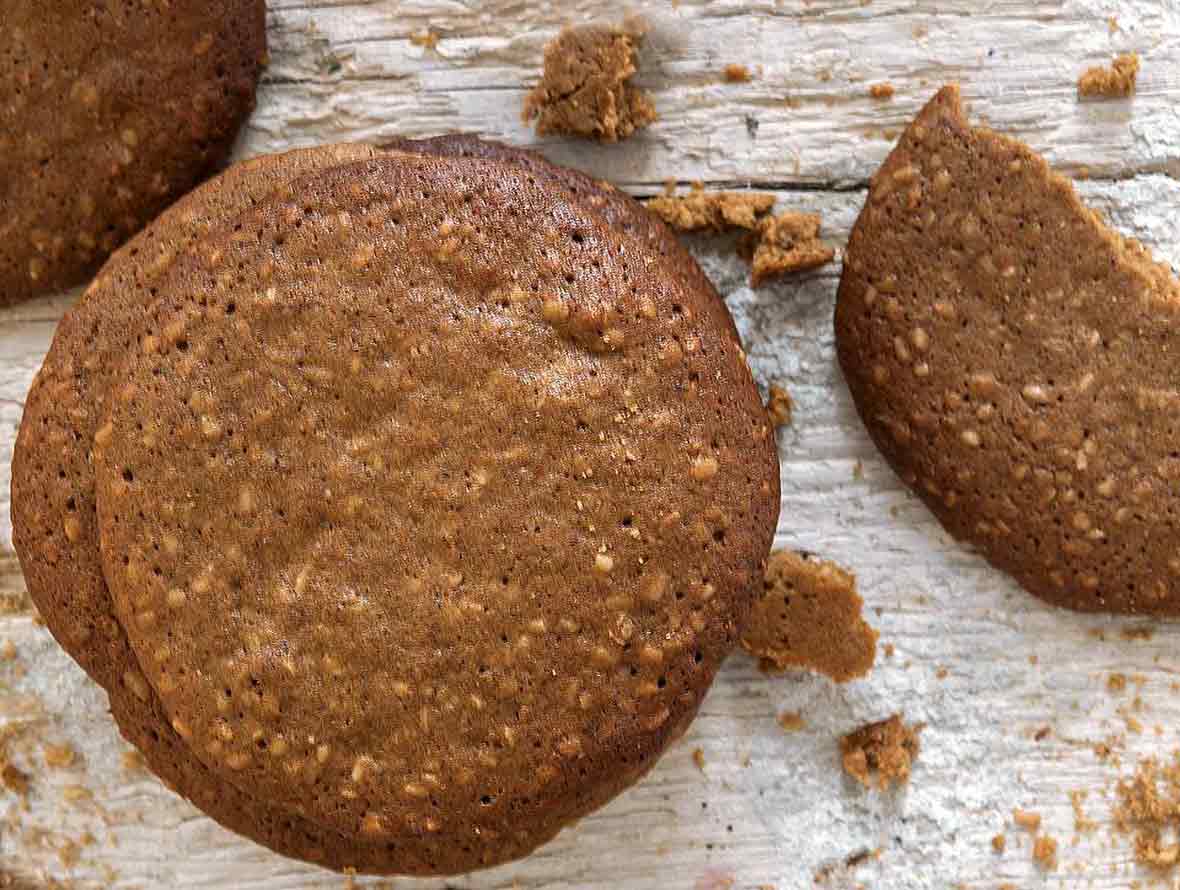 A little lexicon that you would have found handy had you been privy to the original version of this recipe, before we tweaked it for contemporary cooks and stateside grocery stores…

Pinhead Oats
Everything we could find on the topic indicates these are quite similar to Scottish oats and Irish oats (no surprise there) and steel-cut oats. But can you imagine making cookies with steel-cut oats? Neither could we. So we tried making the cookies with rolled oats, which worked quite fine. If all you have on hand is quick oats, you could probably use them with no complaints.

Pudding Spice
This is not unlike that somewhat antiquated American spice blend known as pumpkin pie spice. You may substitute one for the other. Or, to make your own pudding spice, grind together 1 small cinnamon stick and 1 tablespoon each cloves, mace, ground nutmeg, coriander seeds, and allspice berries. You can also simply substitute ground allspice for the entire amount of pudding spice.

Lyle’s Golden Syrup
Thick, sticky, and unthinkably gooey, this almost amber syrup is made from inverted (essentially, evaporated) cane sugar. It’s quite common in Britain and Australia, although it’s not at all tricky to find in the States. Look for it in the baking aisle of many grocery stores or substitute two parts light corn syrup plus one part molasses OR equal parts honey and corn syrup OR maple syrup OR dark corn syrup. 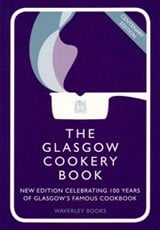 Preheat the oven to 350° F (176° C).
Combine the oats, flour, sugar, baking soda, and spices. Using your fingertips or a pastry cutter, rub the lard or butter into the oat mixture until it resembles a coarse meal.
Add the syrup and egg to the oat mixture and stir until you have a fairly stiff dough.
Scoop the dough into tablespoon-size balls and place them on the baking sheet, spacing them about 2 inches apart. Top each cookie with 1/2 almond. Bake until the cookies are slightly puffed and golden at the edges, 10 to 12 minutes. Let the cookies cool on the baking sheet a few moments, then transfer to a wire rack to cool.
Print Recipe

Back to My Family’s Parkins Cookies on Leite's Culinaria