Hello, My Name is Karletta Moniz, and I’m a Chocoholic 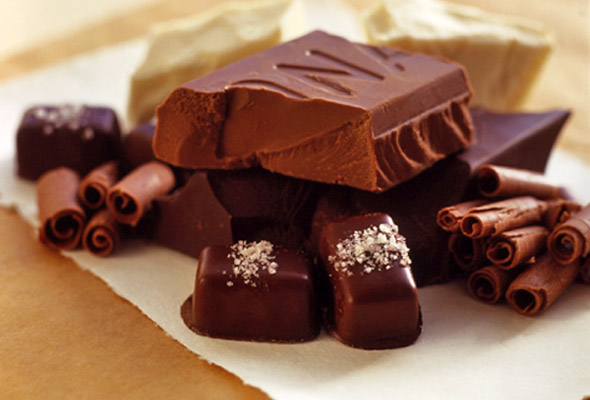 And my life has become marvelously unmanageable. It’s 6 a.m. and I’ve already had my first fix. This morning it was a thin, dark, velvety napolitain of Venezuelan Criollo with a coffee chaser. There was a time when I’d have been satisfied with a few semisweet chocolate chips snuck from a yellow and brown cellophane bag before I left for school in the morning. That’s how it started, my descent. My parents never suspected their bright, popular, seemingly well-behaved child of stealing chocolate at seven in the morning, whether a handful of morsels here or a few M&M’s there.

It was much easier to fuel my addiction after I started college in Berkeley. It was just after Alice Medrich had set up shop at Cocolat, where she was making chocolate truffles the size of Ping-Pong balls. I left the kid stuff behind and started to mainline Medrich’s dark chocolate creations: cocoa-dusted truffles, Queen of Sheba cakes, éclairs. There were cheaper thrills, too, including the pleasures of hot fudge sauce, no ice cream necessary, introduced to me by a boyfriend.

Post-graduation found me wandering along the Seine, strung out on hot chocolate from Angelina, an empty brown box from La Maison du Chocolat clutched to my chest, tell-tale cocoa powder clinging to my lips, Berthillon chocolate ice cream dribbled on my chin. Other tourists sought out La Tour d’Argent. I only had time for Christian Constant.

That was during the ’80s. Who didn’t have an addiction then? Yet some 20 years later, I’m still at the mercy of mine. Given that this is the best possible time to be dependent on chocolate, I don’t consider this to be a bad thing. The supply has never been more abundant or as refined, with stuff flowing in, pure and uncut, from Venezuela, Madagascar, and Ecuador. Single-plantation grown Criollos, Trinitarios, and Porcelanas. And not a federal agent in sight.

I have no desire to change anything about my habit—except perhaps to share it. In what may seem a strangely unselfish act, this is the only way I know how to derive even more pleasure from chocolate than I already do.

Here’s how I go about it.

First, I call up three good friends who can be trusted. Any more than four at a sitting starts to smack of indecency.

The second fix should be in the same range as the first, but with slightly less cacao and more sugar, something like Amano’s 77% cacao Ocumare, made with Criollo cacao beans procured from a remote valley on the central coast of Venezuela. From here, I move on to something a little less than bittersweet, something with a smooth, satiny mouthfeel, perhaps Guittard’s 61% cacao. Number four is a milk chocolate, but one with a high cacao content—Michael Recchiuti’s 55% cacao Dark Milk Chocolate bar will do quite nicely.  And because every tasting needs a ringer, I  conclude with a white “chocolate.” Yes, this undoubtedly sparks a conversation about why this confection is not legally considered chocolate, but it’s also a chance to understand exactly how it compares to the real deal. Green & Black’s organic white chocolate, flavored with bourbon vanilla, works for me.

But before I unwrap the chocolate, there are a few little niceties I tend to, including pouring glasses of still water and setting out something to cleanse the palate, whether plain crackers, baguette, or slices of green apple. I also moisten napkins and have them at the ready for chocolate-smudged fingers.

Then each bar is broken into bite-sized pieces and placed on separate plates that are numbered from one through five, divvied up per the above order. But it’s still not time to taste yet. Remember that episode of “Ally McBeal” where Ally taught Georgia how to really embrace the anticipation of her latte before taking the first sip? That’s what we’re about to do.

First, look at the chocolate. Really take it in. What are the similarities in color? Some pieces may have a reddish tinge, others will be as dark as coal. Look beyond the colors to the differences in sheen.

Pass around the first plate of chocolate so that each friend takes one small piece. Break the piece in half. Listen carefully. Does it speak to you? Can you discern whether it emits a quick snap or a dull thud? Hopefully it’s the former, which indicates well-tempered chocolate, the result of a fine chocolatier. Let one of the pieces start to melt between two fingers. Take a big hit of the chocolate aroma that releases as it warms. Inhale. Then hold it. Hold it. Hold it. Now exhale slowly. Where did it take you? Have you been there before? Can you describe it? Does it call to mind just-picked raspberries? Freshly mown hay? Rub your fingers together. Is the chocolate smooth or gritty? Use all your senses, save for taste.

Now take a nibble. Let the piece melt oh-so-slowly on your tongue. Now practice your inhaling. As you start to taste the chocolate, open your mouth slightly and suck in a little air. This will help carry the aroma up the back of the throat to your nasal cavity. Now the magical mystery ride begins. Does the chocolate reveal itself quickly or is it being coy? Does it start off with a heavy acid hit before the lighter notes enter the picture? Or will the luscious fruitiness reveal itself right from the beginning? There’s only one way to find out.

Now is the moment you’ve been waiting for. Go ahead. Indulge. And ask yourself, what do you taste? Initially, I find it helps to stick with easy descriptors such as sweet, salty, bitter. But as the flavors become more pronounced, move on to your library of taste memories. Don’t hold back. Does it taste of fruit? Dirt? Does it start off tasting like fruit, transition into dirt, and then finish with a tobacco smack? Get your entire mouth into the groove. The fat is carrying the flavor around and around and around, and the sugar is kicking in and pushing the fruitiness even higher before it mellows into a smooth, long finish. Or, sadly, perhaps the trip ends abruptly with a crash, with no lingering flavors. If so, bummer. But was it a worthwhile ride while it lasted? Did it satisfy you deeply? Do you crave it? Are you ready to take it lighter and sweeter? Or darker and richer? It’s all in the interest of research, and only you can know.

Surprisingly, I’ve found that the more satiating the chocolate experience, the less I need. This means any number of thigh-friendly things, among them that I no longer need to worry about respecting myself in the morning.

Back to Hello, My Name is Karletta Moniz, and I’m a Chocoholic on Leite's Culinaria