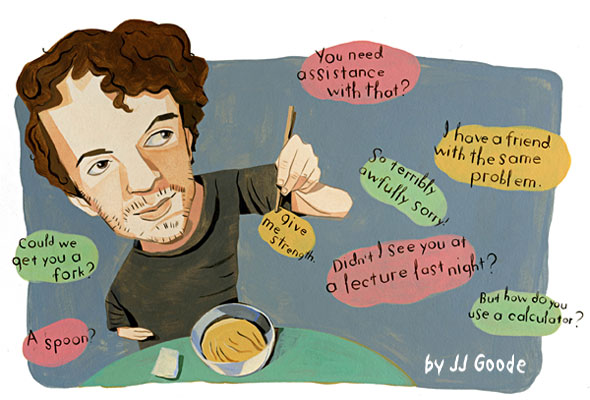 Of all the bad things that could befall a baby, what happened to me was perhaps the best of the worst. I was born with only one arm. Well, sort of. Technically, I was born with radial aplasia, a condition that made my right arm about the size and shape of a plucked turkey wing. The arm is good only as a place to occasionally hang grilling tongs or shopping bags.

Yet since I never had a right arm, I never missed having a right arm, and I grew up a happy kid who tied his shoes, played sports, and was exempt from rope-climbing during gym class. I never thought that my being short an arm would interfere with anything I wanted to do, let alone what I wanted to do for a living, unless I suddenly decided to try my luck as a boxer. So I was surprised that it complicated the job I finally took on, that of a food writer.

When I first decided to give this unusual occupation a shot, I had a deluded notion of what it would be like to write about food — much as I’m sure most people do. In my vision, I work in Paris, at a desk in a sunlit office. I write about cheese, and there are a dozen lactic gems arranged on a wood cutting board next to my laptop. I taste and type and taste and type, which is as easy to do with one arm as with two. Yes, I thought, the typing would be slower for me, but that’s hardly a make-or-break impediment. Little did I know that my real-life assignments would be encumbered by more than just inferior word-processing skills.

Part of my income as a food writer comes from reviewing restaurants. For this, all I have to do is eat food and remember what I eat well enough to write about it later. But to do this, I need to visit restaurants anonymously, so I can best relate the dining experience of the everyman. For critics who review big-budget restaurants with big-name chefs, maintaining their anonymity in the face of crafty restaurateurs presents a problem. But I’m not that kind of critic. Those who run the Thai coffee shops, Senegalese joints, and Chinese dim sum houses that I write about couldn’t care less that I might be a reviewer. My problem, then, is not dining anonymously — it’s eating inconspicuously as the restaurant’s only asymmetrical customer.

Rarely am I treated like a regular diner. At Indian buffets, waiters apparently doubt that I’ll be able to make it to and from the troughs of tandoori and dal without ending up covered in spilled food. As soon as I stand up from my table, a team of them descends upon me, trying frantically to grab my plate and spoon my lunch. “I played baseball for 12 years,” I wish could tell them. “I can handle biryani.”

At Chinese and Japanese restaurants, I’m regularly the only one at my table denied chopsticks. Instead of trying to parse the tortuous logic that might lead people to assume that my missing an arm would make me incapable of using an eating implement designed for use with one hand, I attribute their behavior to the same wacky reasoning that compelled one woman to ask me whether I could use a calculator.

Relating the layperson’s dining experience is nearly impossible when waiters treat me with this embarrassing solicitousness, which I am sure they must otherwise reserve for celebrities and visiting heads of state. For every glass I accidentally knock over, for every fork I clumsily drop, I receive from my waiter an apology so earnest, so heart-wrenching, you’d think he had just given a switchblade to an infant and watched the little guy cut himself.

Another big part of my job is schmoozing. To promote my work, I have to attend the type of parties where important food industry people form intimidating social clusters and graze from trays of foie gras and tuna tartare. Why the hosts let me in the door, I’m not sure. Yet my goal is clear: to make some positive impression on the attending editors, chefs, or restaurateurs so that if I ever need to get in touch, the chance that these folks will call back creeps up from nil to slim. As if this weren’t already a Sisyphean endeavor for someone so tongue-tied and horrendously unfashionable, you can guess how well I do with only one hand to hold both my hors d’oeuvre and my glass of merlot. Halfway through nearly every bash, my lack of success is clearly stamped in purple on my shirt.

Then, of course, there’s cooking. Any self-respecting food writer should know how to cook, even if it’s just for the street cred. Of course, he may also have to test recipes, interview chefs, and do countless other things for which it would help to have at least a passing knowledge of how to make pâte brisée or grill the perfect steak. After learning to hit a baseball and drive a car with almost literally one hand tied behind my back, I thought that learning to cook would be easy. Not so, it turns out, because it entails two tasks that my other challenges do not: hauling pots of boiling water and wielding sharp instruments that with one careless chop could make me long for the days when I was merely missing a limb.

Though I have since devised ways to make dinner without maiming myself, I haven’t found a way to speed up my prep work. Have you ever peeled a carrot using just one hand? Try it and you’ll understand why most kitchen chores take me twice the time they take the normal cook. And because it takes me so long to get to the fun part of cooking — the sizzling, browning, and roasting — my will to practice is about as strong as my will to do the dishes afterwards.

Still, I felt that I had to learn to cook, so a few years ago, I made an appointment at one of New York City’s finest culinary schools. When I sat down for a one-on-one information session, I asked a flurry of basic questions, putting off the essential arm-related ones as long as possible, because they always create such excruciating awkwardness. This day was no different. Finally I asked what kind of special assistance the school could provide, and instead of getting, say, assurance of a time extension for my future carrot-peeling exams or, as I had secretly hoped, the promise of an assistant to take care of all my chopping and dicing, I got a story.

Flipper arm. No, this is not some code phrase people in my predicament use only around each other — I have no idea what it means either. As he rambled on, I learned that the school had graduated several students with flipper arms. Although it was comforting to think that the school had trained a brigade of half-men, half-dolphins — if it could accommodate them, it could surely accommodate me — I decided that the odds were slim of my making it through any school despite this sort of rabid condescension and supreme misunderstanding. I resolved to continue my culinary struggle alone.

Besides, I had greater questions to ponder than whether I’d ever learn to turn out mirepoix in under two hours. For instance, if I were ever to become mute, would I have the sign-language equivalent of a speech impediment? Or if a policeman screamed at me, “Put your hands up or I’ll shoot!” how would I explain that I had only one hand to put up before he opened fire?

Yet it’s when I’m at my most frustrated that something happens that reminds me to be thankful for what I have. Recently, an editor, whose face I know well, spotted me on the street and approached. I was stunned — even more so when she suggested in the course of our conversation that I write a story for her. My search for a coherent response was foiled by a question echoing in my head: Why had such an important person recognized me, the ground chuck to her rib eye, the Pepsi to her Bordeaux? Then I realized: Someone who looks like I do isn’t easily forgotten.

JJ Goode has written about food and travel for the New York Times, Wall Street Journal, Gourmet, Saveur, Bon Appétit, Food & Wine, Men’s Vogue, Details, and Every Day with Rachael Ray. He's also co-authored more than half a dozen cookbooks, including his most recent title, A Girl and Her Greens, with celebrated chef April Bloomfield. A Jersey native, he lives in Brooklyn.