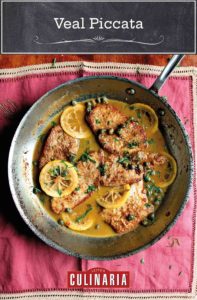 Veal piccata that’s quick enough to make on a weeknight yet restaurant-worthy enough for weekends.

Very thin cutlets, called scaloppine, are essential to dishes such as veal piccata. Pounding the meat until it’s thin tenderizes the meat and allows it to cook quickly. The key is to achieve maximal thinness without tearing or damaging the meat.–Editors of Saveur Magazine

Can I make this veal piccata with chicken?

Piccata’s not just for veal. You can turn a cutlet of just about any meat that’s tender, quick-cooking, and can be pounded thin into piccata. Chicken and pork work exceptionally well. 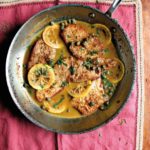 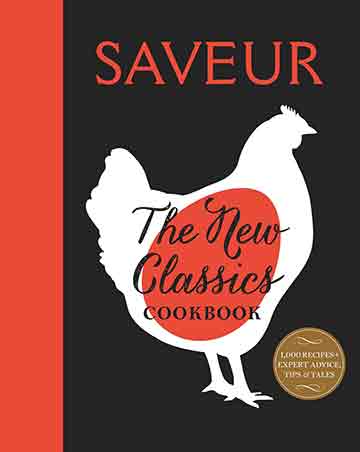 You really can’t go wrong with having this lovely veal piccata as the headliner on your dinner menu for tonight. Not only is this recipe a classic, but it’s also quick and easy. It’s perfect for spring with its bright lemon flavors.

In terms of time, my total time was about 25 minutes. The veal cooked nicely in the 3 minutes suggested, and I turned the cutlets around the 2-minute mark. Also, I used the same white wine that I served for dinner to deglaze the pan. Overall, this was a wonderful recipe for a classic dish.

This veal piccata recipe is an easily executed version of the classic dish. The only veal cutlets I found had already been pounded for scaloppine. They were all around 2 ounces or so.

I served the scaloppine along with brown rice spaghetti and tomato sauce and a baby arugula salad with shaved pecorino Romano and white balsamic vinaigrette. My second piece of scaloppine, I put right on top of the salad and, whoa, was that good.

I’ve made piccata in the past with veal, chicken, and sole. It’s a dish that I really enjoy. This recipe is an excellent version. It’s quick, easy, and yields wonderful results. It’s my new go-to recipe for piccata.

The rest of the recipe fell into place quickly. The finished product was fresh and bright. It was also absolutely delicious. I served the piccata with extra creamy and rich mashed potatoes, which the sauce enhanced beautifully. I also sautéed fresh string beans with pieces of red bell pepper. A glass of rosé or pinot noir makes for a perfect meal. Next time, I’ll make extra sauce. The flavors in the sauce mixed with the pan drippings are amazing, especially if you’re a fan of lemon.

This recipe was easy to follow and delicious. My whole family, including the kids, enjoyed it. The recipe took me 40 minutes from start to finish. I used canned chicken broth since I didn’t have any homemade on hand. The process was straightforward and easy. It’s a nice weeknight meal. I would definitely make this again.

This veal piccata was delicious and tasted as good as any restaurant veal piccata that I’ve ever had. The lemon flavor is very nice, but not overwhelming. Do make sure that your pan is hot before you begin cooking the veal so that you can get a nice crust on it before the meat is completely cooked through. I also thought that the directions provided on pounding the meat were excellent.

This is a delicious veal piccata. The recipe is relatively quick and easy—perfect for a weeknight meal.

I purchased the veal at Whole Foods Market and was only able to find one package of veal cutlets, so I purchased a second package of veal labeled “scallopini leg.” The cutlet was definitely tastier than the scallopini. The veal was rather pricey, and I would probably only make this again with chicken or pork as a substitute.

This veal piccata recipe is full of flavor and is a perfect dish to impress family or company and was delicious. I made the full recipe, and 2 pieces veal per person worked out great.

The instructions on pounding the veal cutlets were easy enough to follow. I may add an additional 1 tablespoon lemon juice next time and would garnish with more fresh lemon slices.

I just have one thing to say about this recipe: It’s great. I’ve made it twice this last week, it’s that good. It’s very easy to follow, and all the measurements and times are spot-on. This is an easy dinner, from prep to table in an hour, and for a restaurant-quality meal, you can’t get better than that.

This recipe is well-written and easy to follow. It’s an appealing and pretty dish that I would be proud to serve. Serve with linguine and some good italian bread and its heaven. I now make this recipe on a weekly basis.

Although this recipe is written for veal, if you do not like to eat veal, don’t worry, as this recipe works just as well for chicken. I prefer to use Chardonnay for the wine. The rest of the recipe is flawless in my opinion. I imagine this would also work with thin pork chops.

This veal piccata came together in no time at all and was completely devoured for dinner with some rice, a large green salad, and a crisp Napa Chardonnay. Everyone loved it, including the kiddos, who were very skeptical about the capers in there but were ultimately won over by the tart, bright sauce and tender veal. This is a winning recipe for a quick weeknight dinner.

This recipe would work great with pork loin or chicken as well. The amount of butter and oil was perfect. However, as expected, the last batch browned faster than the first. The cooking time was accurate for veal (about 3 minutes), but I think it would need to be increased for chicken. Judging when a liquid has reduced by half in those flat pans is challenging. So for the chicken broth I simply went by the time the recipe specified, which worked out well.

I made this recipe with chicken breast cutlets and loved it. The sauce is silken and has just the right amount of lemon. Since the meat is so thin, it cooked quickly and the whole dish came together in under a half hour.

I made a half recipe with just over a pound of chicken breast and the amount of sauce was just right. Just enough sauce for a light coating on the cutlets, but not swimming in it.

I love how piccata sauce brings briny capers and lemon together in a velvety flavored treatment for meat, fish, even tofu. I don’t eat veal, but we do variations on piccata, often with other proteins. Turkey tenderloin is perfect for this, sliced across the grain into 1 1/2- to 2-inch wide pieces. I placed the slices in a couple heavy resealable plastic bags, then gently tapped them with a wooden rolling pin (one without knobs), as a metal tenderizer might tear the bag or meat. The turkey doesn’t take much effort to thin out to 1/4-inch thickness.

I also like to make sure that the amount of sauce will be generous, so that if you’re serving the piccata with a starch or vegetable you have a satisfying sauciness. Before slicing the lemon, I lightly zested it and used the lemon zest as a garnish when plated. I served this over yuba noodles. The piccata was fork-tender, turkey tenderloin is a terrific substitute for the veal.

My family loved this variation of veal piccata. We have a couple of conscientious objectors to veal in the house and it’s nice to know that when we chose to have this dish, I can use turkey as an option for them. The turkey was tender and the whole thing was delicious.

The citrus flavor in the sauce was subtle and we liked the bite of the capers. I used a blended pinot grigio wine to make the sauce so served that with dinner. I found the turkey slices were more delicate than veal in the raw state. If your turkey slices are any thicker than 1/4 inch, then the pounding should work well. Hands on time totaled about 20 minutes and total time was 40 minutes from start to serve. We would have had enough for 6 servings, but some tasters went back for more, so none was left.