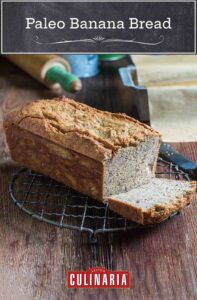 This paleo banana bread, made with coconut flour and almond flour, is gluten free and dairy free. For those not keeping track of such things, it’s also awesome tasting.

This paleo banana bread recipe is gluten-free and dairy-free, for those keeping track of such things. But it’s also compelling enough in the taste department to make anyone—even someone without those particular dietary restrictions—crave a second slice. Maybe even a third. Do we hear fourth? Just bear in mind that with its subtle hint of cardamom, this is most definitely not your grandma’s banana bread. It’s even better. This recipe has been updated. Originally published June 6, 2015.–David Leite 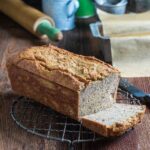 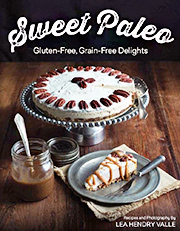 This banana bread is definitely a winner! I was drawn to this recipe because it’s gluten-free. I’m always on the lookout for delicious alternative recipes for family members with wheat sensitivities. Upon closer inspection, this recipe is paleo as well, and that interested me even more. Finding healthier (grain-free and refined white sugar-free) alternatives to replace my traditional favorites isn’t easy, but this loaf is a keeper. Like any other banana bread recipe, this one is quite straightforward and easy to follow. Anyone looking to give alternative baking a try, this is a great loaf to add to your recipe file. It’s lovely for breakfast or a comforting afternoon treat with tea.

We had a total of 9 taste testers in our family—7 adults and 2 kids. Everyone enjoyed the loaf—it’s even kid-approved! I will definitely be making this loaf again. And very soon! Family members have already put in their requests for more. For the next go-around, I plan on increasing the cinnamon to 1 teaspoon instead of just 1/2 teaspoon and possibly even including a dash of freshly grated nutmeg for added spice. The bananas I used were just ripe, and this certainly didn’t take away from the flavor nor anyone’s enjoyment, but I think the banana flavor would have been even more pronounced had I used bananas that were riper. So now I have bananas ripening on my counter for the next batch. Can’t wait!

I was surprised and delighted by how delicious and (dare I say it) moist this paleo banana bread was. I love love LOVE traditional banana bread and wasn’t sure how it would come out using gluten-free flours. The first bite erased all doubt from my mind. The cardamom gave the banana bread a beautiful, delicate, floral aroma, which faded a bit once the bread was cool but still gave it a more sophisticated flavor than classic banana bread.

The crumb was really soft and lighter than it tends to be in the classic version, yet it still felt substantial. It was fantastic straight from the oven slathered with salted butter. (I know I should have waited for it to cool a little, but when something smells this good, waiting is for chumps.) Maybe best of all, the loaf held up really well in the fridge. It took us about 5 days to finish the whole loaf, and it was almost as good on day 5 as day 1. It hardly lost any moisture. I didn’t get to try it with my other favorite banana bread spreads (peanut butter and cream cheese), but I know they would be great on this bread as well.

The only reason this doesn’t get full marks from me is the almond flour was slightly coarse, which affected the texture. Having said that, other brands might be different, and you could probably give the almond flour a quick blitz in the food processor, stopping before it turns into almond butter, to get it a little finer. I also worried about being able to find the coconut and almond flour, but they were sitting side by side in the first grocery store I went into—bonus! I had a slightly nontraditional loaf pan—12-by-4 1/2 inches with a rounded bottom. At 42 minutes, the bread was done, and I probably could have pulled it out a minute or two earlier, but it got a nice brown crust and didn’t dry out or burn.

This paleo banana bread isn’t only gluten-free but also grain-free, which will appeal to many people out there who are trying to reduce or eliminate grains in their diet. I’m happy to report that it’s also delicious. I was concerned that this recipe would be too plain-Jane for me—where are all the mix-ins? The nuts? The berries? But this banana bread has a secret weapon, and its name is cardamom. Turns out, cardamom is a perfect match for banana bread, and it gives this version a fantastic flavor. I’m a convert. I used an 8 1/2-inch-by-4 1/2-inch loaf pan. (I’ve never even seen a smaller loaf pan before.)

The bread came out a little short and squat, but that’s OK. It was done in 45 minutes. Like all gluten-free baked goods, the texture is best when it is warm, so once the bread is cold, you’ll want to give your slices a quick pass through the toaster oven.

I have to admit, I’m not usually drawn to making gluten-free bread. Honestly, I assume that such a recipe will be a bit dry and not as tasty as a comparable non-gluten-free recipe. However, with ripe bananas staring me in the face, I decided to give this recipe a whirl. I used regular melted butter for the oil component and topped the bread with chopped raw almonds to accentuate the taste of the almond flour and to give it a bit of crunch.

I have to admit that I have a rule with any banana bread recipe: I always add in 1 more banana than the recipe suggests. I find that the extra banana gives banana breads the moisture and texture that they need. So for this recipe, I actually used 3 mashed, ripe bananas in the batter. The bread smelled divine baking in the oven, and the results were very tasty. It was moist (and I even had an end piece!), full of banana flavor, and the ground cardamom gave it a unique taste. Cardamom is such a warming spice and it paired really well with the ground cinnamon and the sweetness of the bananas. The bread was not super sweet, but I thought it was just sweet enough for a lovely breakfast treat with a piping hot cup of dark coffee.

This paleo banana bread is a moist, flavorful, gluten-free version of banana bread. It bakes into a beautiful loaf that’s easy to slice and can be eaten as breakfast, snack, or dessert. I would definitely put this on my favorites list if I had a reason to bake gluten-free.

Since I don’t have such a reason, my old family favorite still heads the go-to list for banana bread. I used a 9-by-4-by-3-inch loaf pan and my baking time was 65 minutes. I let the bread cool for 10 minutes before setting it on a wire rack to finish cooling. This recipe takes a lot more work than my favorite go-to banana cake and I am assuming it’s because of using the almond flour, which needed to be strained. My usual recipe is one that you dump everything into a blender and go from there into the pan and into the oven. This is a little more complicated, but for gluten-free, it is quite good and not that much more time or trouble.

This paleo banana bread recipe makes a moist, tasty, gluten-free alternative for those of us who miss quick breads.

The batter comes together in about 15 minutes. I chose to mix it all by hand as I didn’t want to haul out the stand mixer to make 1 loaf. It makes a pretty wet, thick batter. It took one hour for it to bake until done in the center. I allowed it to cool for 15 minutes and then it lifted right out of the pan, no fuss no muss. The first day it was hard to say if the primary taste was almond or banana, but it was tasty. The second day it truly tasted like banana bread—firm, moist, and very banana-y. If you can keep it for a third day, I’d bet it would be delicious. In our house it didn’t make it past the second day. I guess I’ll have to get out the stand mixer as the family wants more.

This paleo banana bread recipe has overcome my skepticism about making a GF banana bread that is a reasonable stand-in for the real thing. This turns out a more delicate cake than a traditional banana bread, and although it doesn’t have the same crumb of a wheat-based banana bread, I think the balance of spice and moistness will work for folks really keen to have this alternative.

Best enjoyed chilled alongside coffee or as a light dessert after dinner, it reminds me of a delicate yet substantive sponge cake. The amount of cardamom seemed daunting, but it worked perfectly and it seems worthwhile to use the best spice you can (I ground it freshly for this recipe and used pods from my recent Penzey’s stash). I used unsalted butter because I prefer that flavor in my baking to coconut oil, and the recipe having coconut flour already had some of that flavor. This takes a little more prep than the average banana bread to grind the spices, blitz the almond flour, and sift, but I think all this is absolutely imperative to achieve the delicate patisserie-like cake.

I gave it 55 minutes before I took it out of the oven. Its internal temperature was at 189-194℉ and I had used an 8 1/2-by-4 1/2-inch loaf pan. I ended up with a lovely 2-inch-tall cake. After slicing it in half, I took my first slice from the center so I would know how done it really was, and it was cooked through yet delicately moist. I might play with variations on this recipe made with quinoa flour in place of the coconut flour in the future, as they would have less fiber but I think the texture would be pretty close. I think this is a really useful recipe, for whatever reason you may be choosing to bake gluten-free. It expands my arsenal for entertaining friends who have specific dietary restrictions and could be served very elegantly with a little whipped cream (or whipped coconut cream) or some fruit. I am now very keen to explore using GF flour with my favorite banana bread recipe from the LC site.

One caution to folks who keep a pizza or baking stone in their oven is to REMOVE it before baking. The stone may interfere with the oven reaching proper temperature. Even though your oven sensor thinks it is at correct temperature, and though convection may make up for that, I cannot be certain. I made this twice because my first version was baked with the stone in place and that did not end well.