This sweet cream ice cream recipe contains no vanilla. And no eggs. Just milk, cream, cream cheese, and sugar. And it tastes just like the rendition at Cold Stone Creamery that started the whole sweet cream sensation. If you’ve not experienced it, think of it as sorta like cheesecake in both its richly indulgent taste and its obscenely smooth texture. Although it’s actually sorta indefinable. Sorta something you need to experience it for yourself. Originally published May 16, 2015.–Renee Schettler Rossi 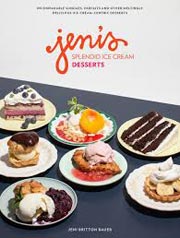 In a small bowl, mix about 2 tablespoons milk with the cornstarch to make a smooth slurry.
In a slightly larger bowl, whisk the cream cheese and salt until smooth.
Fill a large bowl halfway with ice water.
In a 4-quart saucepan, combine the remaining milk, heavy cream, sugar, and corn syrup and bring to a boil over medium-high heat. Keep it at a boil for 4 minutes.
Remove from the heat and gradually whisk in the cornstarch slurry. Bring the mixture back to a boil over medium-high heat and cook, stirring with a heatproof spatula, until slightly thickened, about 1 minute. Remove from the heat.
Gradually whisk the hot milk mixture into the cream cheese mixture until smooth. Pour the mixture into a 1-gallon resealable plastic freezer bag, squeezing out as much air as possible before sealing it. Submerge the bag filled with the ice cream base in the ice water and let stand, adding more ice as necessary, until cold, about 30 minutes or tuck it in the fridge and let it rest for up to several hours.
Process the ice cream base according to your ice cream machine manufacturer’s directions. (The ice cream mixture will be very thick even when you begin to churn it. Don’t fret. This is okay.)
Transfer the churned ice cream into a container with a lid. Press a sheet of parchment directly against the surface of the ice cream and seal it. Stash the ice cream in the coldest part of your freezer until firm, at least 4 hours.
Print Recipe

I had homemade blueberry preserves on hand, so that's what I went with as an add-in. (Blueberries and cream are a match made in heaven.) I chilled the sweet cream ice cream mixture in the fridge for about 8 hours before churning it as I didn't have the time to churn it the same day, and ice cream bases benefit from a long rest in the fridge anyway. Adding the blueberry jam by the spoonful worked very well and a final spoonful (or two) on top added a nice touch and made sure there was a burst of flavor with every scoop.

I have made many flavors using this basic recipe and have always been pleased. Just a couple suggestions follow...

Also, I like to freeze the finished ice cream for another 5 or 6 hours to make it very solid, although you can eat it immediately after churning and it's still top-notch. I really love this recipe, and you can make it in a little more than half an hour, about the same amount of time it'd take to drive to the store to buy something that wouldn't be nearly as good!

I loved the texture and taste of this sweet cream ice cream. It was smooth and creamy. There isn't any vanilla called for in the recipe, so the taste is pure sweet cream and cream cheese.

I didn't layer it with a sauce or jam, but I could see adding a strawberry or blackberry coulis to it.

When I've made ice cream in the past, it usually froze in 20 minutes, but this sweet cream ice cream took about 35 minutes. I transferred it to a quart container and let it freeze overnight.

One of my favorite ice creams to make is Jeni’s Black Coffee Ice Cream. It was a tester recipe here a few years ago, and it's a real winner. The cream cheese, the cornstarch slurry, the cooking method, the parchment paper covering the finished product are all similar to this recipe. How could I not try this recipe? This is even easier to make than the black coffee ice cream and is so much easier to make than ice creams that are made with egg yolks. You basically mix up some ingredients, boil them for a few minutes, whisk in the cornstarch slurry, boil for another minute, then mix everything into the cream cheese. That’s it.

As advertised, this ice cream tastes like sweet cream. It's a great base for add-ins. I treated each pint differently. With the first pint, I poured some dark chocolate sauce in between the layers and sprinkled pistachio toffee over that. After being in the freezer for awhile, the chocolate sauce solidified too much. The ice cream really needed to soften or you had to break through the layers. I would not make this with a chocolate sauce again. (Did I really say that?)

When making the second pint, I found a forgotten jar of brandied cherries that I'd made last summer in the refrigerator. I boiled down and thickened the sauce with a little cornstarch and chopped the cherries. I layered that into one of the pint containers with the ice cream. Really yummy.

Back to Sweet Cream Ice Cream on Leite's Culinaria