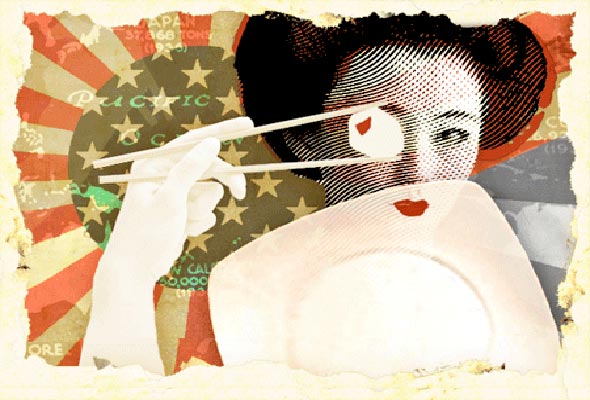 Recently, reader Janet B. wrote us looking for a brief history of Pacific Rim cuisine. She wanted to know where it began and who’s credited with originating it. Brief is, of course, a very subjective term, but I’ll do my best.

To understand Pacific Rim cuisine — which is, in essence, a style of cooking and presenting foods that combines the ingredients and techniques of Asian and West Coast cuisines — we must first understand the circuitous development of culinary trends from which it evolved. In the 1970s, fusion cuisine was all the rage, and it was exactly what the term suggests: a mixing of different cooking styles and ingredients to yield something new and presumably exciting. At the time, young chefs were experimenting with all sorts of new combinations of cultures, and Pacific Rim was one of these fusions, as was world cuisine, a melding of Latin-American and Asian styles.

Fusion cuisine, itself, was an outgrowth of French nouvelle cuisine. As Raymond Sokolov, long-time food writer for The Wall Street Journal and Natural History, explained, nouvelle cuisine was born in a postwar France that was being exposed to outside influences and ingredients in ways the traditionally xenophobic French could never have imagined. In addition, the French were traveling more extensively then ever before. Sokolov wrote:

“The flow of ideas from Japan to France brought a highly developed food aesthetic — one based on delicate visual effects and achieved most often on individual plates — to young French chefs already predisposed to paint with food on the circular field of a plate. Nouvelle cuisine rapidly evolved into a feast for the eyes, à la japonaise.”

Nouvelle cuisine’s credibility was enhanced in the restaurants of Lyon in Burgundy, France, where chefs such as Paul Bocuse, Michel Guerard, and the Troisgros brothers, Jean and Pierre (the young disciples of the father of nouvelle cuisine, Fernand Point), were working.

At the beginning of the 1970s, in the United States, young chefs were experimenting with eclectic cuisines as well. At The Depuy Canal House, 100 miles north of New York City, chef John Novi was among the first, inventing dishes like his terrine of mousseline of sole and coconut cream. It revealed, when sliced, a thin stripe of watercress-colored mousseline across its center, an elegant obi of black nori surrounding the slice that lounged coyly at the edge of a pool of sweet red-pepper coulis (an inspired fusion of Thai and Japanese ingredients with French technique). In Chicago, chef/educator Ken Hom was espousing his new East-West cuisine, blending European and Chinese approaches to food.

If you imagine the Pacific as a giant plate (which, geologically speaking, it is), the jewel-like Hawaiian Islands are placed right in the center, like the precious compositions of nouvelle cuisine. It was there, in Hawaii, that chef Roy Yamaguchi created Pacific Rim cuisine. Yamaguchi grew up in Japan, the son of Japanese and American parents, and was trained in classical French technique at the Culinary Institute of America. Perhaps it’s not accurate to say that he “created” Pacific Rim cuisine — the idea was clearly in the air at the time — but he was uniquely qualified for the role, and he made the most of it. Yamaguchi soon had restaurants in Beijing, California, Cebu, Guam, Hawaii, Hong Kong, Japan, and New York.

Pacific Rim cuisine, like its predecessor nouvelle cuisine, is, at heart, French cooking tempered by Japanese sensibilities. When Japan was opened to the West a century earlier, the French immediately recognized a kindred spirit. The style à la japonaise influenced literature, music, and art — especially Monet. But as a culinary term, it referred only to dishes incorporating Japanese or Chinese artichokes — the crisp, starchy tubers of Stachys affinis — or to a dessert containing tea-flavored mousse. Not until the birth of nouvelle cuisine on the banks of the Rhône did the French truly adapt the Japanese style to French kitchens. And not until the appearance of Pacific Rim cuisine in Hawaii were the ingredients and sensibilities of the East fully absorbed into classical Western cooking.

However, nouvelle could not remain nouvelle forever. Even in Australia and New Zealand, where it remained popular the longest, by the 1990s Pacific Rim cuisine was beginning to be seen as overly trendy. As a style in itself, it is now beginning to fade from view, but its main tenets — an insistence on freshness, elegant presentation, an eclectic use of ingredients — will simply remain part of good cooking.

References
“French-Flavoured Ambience in the Heart of Hutt City.” The Evening Post (Wellington) Thursday, December 3, 1998; “A Taste of Wellington,” p. 19.

Sokolov, Raymond A. Why We Eat What We Eat; How the Encounter Between the New World and the Old Changed the Way Everyone on the Planet Eats. New York: Summit Books, 1991, p. 225.

© 2006 Gary Allen. All rights reserved. All materials used with permission.