Imagine making homemade Hostess cupcakes, without all the questionable ingredients and that, we swear, taste like an exact copycat of the original, including the fluffy white filling and the drizzly icing for those cute curlicues.

These homemade Hostess cupcakes are unspeakably better than those preservative-laden, shrink-wrapped chocolate cake imposters you grew up on. Swear. In the words of one of our recipe testers, these are “the soft and squidgy cake of my childhood dreams.” And they come complete with the “oddly alluring plastic-like chocolate frosting with white squiggles which spreads across the top like a bedspread, hiding the chocolate crumb cake and creamy center beneath,” according to the genius who devised this copycat recipe, Jennifer Steinhauer. Don’t let the various components of the recipe deter you. As Steinhauer says, “It sounds like a lot of work, but it all goes pretty quickly.” –Renee Schettler Rossi 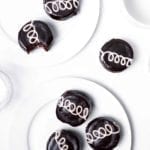 Imagine making homemade Hostess cupcakes, without all the questionable ingredients and that, we swear, taste like an exact copycat of the original, including the fluffy white filling and the drizzly icing for those cute curlicues.
Prep 40 mins
Cook 2 hrs 20 mins
Total 3 hrs
Dessert
American
18 servings
332 kcal
3.67 / 3 votes
Print Recipe 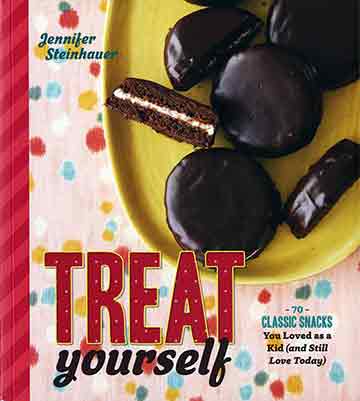 For the frosting decoration (optional)

If Your Favorite Part Of Hostess Cupcakes Is The Filling

This homemade Hostess cupcake recipe was an amazing recipe on several levels. First off, it’s probably the only recipe I’ve ever made where the yields for each part of it were absolutely perfect. The batter made exactly 18 cupcakes. The ganache was also perfect in this regard. Ditto the filling.

Each step came together easily and exactly as directed. Making the center holes for the filling was a snap with a wooden spoon, and they filled easily with the cream. I did cool the cupcakes in their pans and was glad of that when filling them since the cupcakes do expand when the cream is squeezed in and the cupcake tin kept them from exploding in my eager zeal.

These were a huge hit and so much better than the original. I found myself wishing for a Barbie metal lunchbox and a carton of milk with a straw.

They took a while to make, with the 2 idle periods—cooling the cakes and waiting for the frosting to harden before you pipe on the decoration—but none of the steps were particularly difficult, so this made for a good lazy Sunday activity. The recipe took just over 3 hours from start to finish.

The only tricky part about making the cake was getting the cocoa to blend into the small amount of water the recipe called for. Once that was done, the rest was easy.

I filled each cupcake liner halfway, but ended up with 24 cupcakes, not 18. They baked in 22 minutes in my convection oven. Filling all 24 cupcakes required 1 1/2 times the amount of filling in the recipe. When making the holes for the filling, I had to be careful to put the wooden spoon handle straight down through the top, and then to carefully hollow out an area underneath it—the cupcakes had a dry, crunchy top and opening up too big a hole at the top of the cake made a couple of them crack.

The amount of frosting in the recipe was more than enough for all 24. I dipped about half, but since not all the cakes had come up level with the liners, I had to spoon frosting on the rest to avoid making a mess. Both methods worked really well, so go with your gut on that step—it’s hard to go wrong and the frosting isn’t very drippy so it’s easy to handle.

The cakes were, as I suspected from how dry the batter was, very dry, crumbly, and difficult to eat straight out of the oven. The top was still crunchy and I was not feeling warm and fuzzy Hostess memories. But then, about 7 hours later, I sampled another one and the genius of the recipe revealed itself—the filling and frosting had given a bit of their moisture to the cake, softening the top and making it the soft and squidgy cake of my childhood dreams. With a glass of milk and one of these, I was in heaven.

When I decided to try this homemade Hostess cupcakes recipe, it sounded labor intensive. Plus marshmallow fluff? Hmmmm. Well, I was pleasantly surprised. The dark chocolate frosting and the cocoa in the batter keep it from being too sweet, and the marshmallow inside is a pleasant surprise.

Yes, there are really 4 stages—the cupcake, the filling, the frosting, and the curlicue design on top. (My husband asked me why the eeeeees were on it!) It went relatively quickly, though, with no issues. It isn’t really complicated once you start.

There was enough batter to make a few extra cupcakes but not enough filling so I made some plain chocolate cupcakes. There was plenty of frosting. The cupcakes were easy to dip in the frosting, but I also found it simple to use a small offset spatula (or a knife) to swipe the frosting across the top. With all the fancy cupcakes these days, this one stands out as being a little different. We liked them, and they were pretty, too!