Spanish Pizza with Chorizo and Peppers 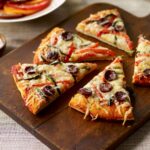 Spanish pizza with chorizo and peppers can be made with homemade or store-bought pizza dough. Strewing the sausage, sliced black olives, and gratings of Manchego cheese on top only add to the flavors. Yup, it's quite an unusual combination, yet it works. And it makes for an interesting tapas.
Anne Bramley

For the Spanish pizza dough

For the Spanish pizza sauce and toppings

Make the pizza sauce and assemble the toppings