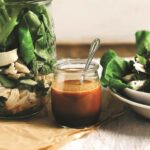 A Thai-inspired peanut dressing is perfect for drizzling over all kinds of things, not just veggies. A creamy combo of peanut butter, soy and fish sauces, and lime juice; make it ahead so your weeknight Thai salad is ready in a snap.
Allison Day

*What is fish sauce used for?

Fish sauce is a salty and savory ingredient that's used to add umami to all kinds of things, like pad Thai, but it's also used to marinate meats, dress vegetables, or punch up the flavor in soups or stews. It's often used as a base for salad dressings and homemade condiments. Made from fish (or krill) that's been heavily salted and fermented for up to 2 years, fish sauce has a pretty powerful aroma straight out of the bottle but it adds a salty umami kick unlike anything else.