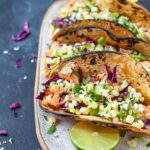 Salmon tacos with roasted corn and chile adobo cream are an easy, casual dinner that's perfect with grilled onions, peppers, and all your favorite fixin's. We hear they're terrific with anything from avocado to cabbage to cilantro.
Maggie Foard

For the chile adobo cream

For the salmon tacos

*What is the difference between chipotle and adobo?

A pretty common ingredient that adds a smoky, pleasant heat, chipotle peppers in adobo are a versatile pantry staple for adding a bit of Mexican flavor to whatever you're cooking. Chipotle peppers are dried and smoked jalpeños—a fairly mild pepper on its own. Adobo is a red sauce that's generally made from paprika, oregano, salt, vinegar, and garlic; it has an unmistakable zesty and tangy flavor. The addition of the chipotle peppers gives it a smoky and spicy kick that the sauce itself doesn't have.