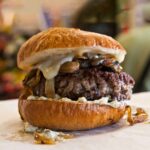 There’s no reason something should be cooked a certain way just because that’s the way it’s usually done. When I think back on all those burgers I formed by hand, slapping ground beef thoughtlessly back and forth, back and forth, I weep with shame. Then I brine pork belly in those hot, bitter tears.
Anthony Myint and Karen Leibowitz

*What are short ribs?

In between the shoulders (which becomes chuck) and the ribcage of a cow, there are another five ribs that are too short to make a decent steak. They're generally classified as part of the chuck, which means that they're tougher but have a lot of rich, beefy flavor. Since they come from the space between the chuck and the rib, they retain the best parts of both—short ribs will have some good marbling like a ribeye but also the flavor of chuck.