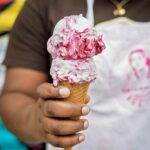 The inclusion of creme or crème fraîche offers a lovely tang and the lack of an overbearing vanilla presence means there's nothing to distract you or compete with the dairy or the blackberries for your attention.
Fany Gerson

For the blackberry swirl

For the blackberry ice cream

The Mexican crema called for in this homemade blackberry ice cream recipe is essentially the same thing as French crème fraîche—which you can definitely substitute here. Less tart and tangy than standard American sour cream, they both have a thinner texture. And, unlike sour cream,  they won't break down when heated, which is essential when making the ice cream custard. Take a look at the ingredients in your crema though, sometimes it has salt added. In that case, you won't need to add any to your ice cream.