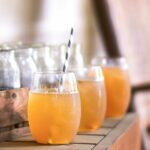 In the South, you can’t have a garden party—or any summer get-together, for that matter—without sweet tea. This is a sweet-tea-based cocktail with a kick of white whiskey.
Anne Stiles Quatrano

*What is white whiskey?

Whiskey is one thing (and don't even get us started on whisky) and white whiskey is close—but different. Think of it as whiskey's younger sibling. It's a raw, unfinished product that's on its way to becoming whiskey but isn't quite there yet. The color of whiskey comes from being aged in casks and maturing, growing up if you will. Essentially, it just came out of the still and hasn't touched the inside of a barrel. It's not quite as smooth as anything aged but it does have its charms, sweetness and the taste of fresh-cut grain among them. However, we do recommend mixing it, just to subdue its teenage voice.