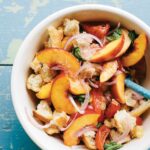 Tomato and peach panzanella may sound unlikely but it's gonna knock your socks off. Or, if you're not wearing socks this time of year, then it'll knock your flip-flops off. Guaranteed.
Sarah Waldman

*Can I use stale bread instead of toasted bread in panzanella?

Hear us out on this—you can use stale bread but it still needs to be toasted. The biggest difference between stale and dried (toasted) bread is how it's going to absorb that lush vinaigrette. Stale bread, because of molecular differences that we only partially understand, will be tough and crusty at its core while getting mushy with dressing at the same time. But toast that very same bread and you'll end up with something that passes  for decent bread again. The same goes for the fresh, tender stuff you've got. Toasting as instructed in the recipe will give you something that can stand up to the dressing but not be too much of a workout to eat.