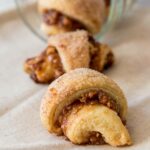 I've made rugelach countless times, but nowadays my dough is even more foolproof because I make it in a food processor. I've also made a few other changes to the recipe. While my mother-in-law's rugelach were filled with cinnamon-sugared nuts, mine also include a slick of jam, some currants, and a handful of chopped chocolate.
Dorie Greenspan