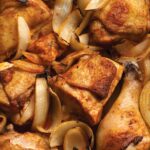 Macedonian spiced chicken livens up your everyday chicken by marinating it in a blend of paprika, cinnamon, cayenne, and garlic before roasting it all on a bed of sliced onions. Smoky, a little spicy, and outstandingly juicy, this chicken dish will become a cool-weather favorite.
Katerina Nitsou

*What kinds of paprika are there?

At its most basic, paprika is made from dried, sweet red peppers.  The taste will depend on the flavor of the peppers used--fruity, mild, bitter, or hot. If a recipe doesn't specify what kind to use, either use one that's just labeled paprika or one that's labeled sweet paprika.  The 2 other types, smoked and hot, are just that and should be used specifically for those attributes. Smoked paprika comes from red peppers that have been smoked over wood fires for days before being ground into a powder. It generally comes from Spain and can be called Spanish pimenton. Hot comes from Hungary and adds a hot, peppery kick to food. You can sub sweet paprika with a touch of cayenne or Aleppo pepper, but subbing in smoked paprika isn't recommended.