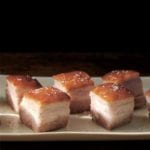 What Exactly Is Pork Belly?

Pork belly is a boneless cut of fatty meat from the belly of a pig and is considered a delicacy in many cultures. In Ameria, bacon and salt pork (which is used often in soups, stews, and chowders) are the most common ingredients made from pork belly. In Italy, it’s made into pancetta. In Alsace, it’s part of choucroute garnie, and in many Latin countries it’s deep-fried and served as chicharrón–called torresmos in Portugal.