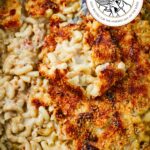 What happens when an unstoppable force meets an immovable object? The same thing that happens when French onion soup meets mac & cheese: glorious mayhem. The crispy caramelized onion and Gruyère topping on this dish is absolutely ridiculous.
MOB Kitchen

*What can I substitute for Gruyère?

That all depends on why you're not using Gruyère. If you don't like the taste but still want a second cheese in your dinner, consider something milder. Emmental is close--it has the same lovely meltiness but a milder flavor. MOB Kitchen themselves suggested that if you just don't want the expense of fancy cheeses, you can use all sharp Cheddar (so 14 ounces/400 grams in total). It won't be as French oniony but it will still be incredible.