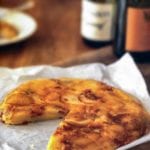 This potato pancake with cheese and bacon, called a truffade in French, is simple to make. Potato slices are fried in lard or olive oil, and Cantal or Gruyere cheese and bacon bits are stirred in. To make a hearty meal of it the Auvergne way, serve it with meaty pork sausages.
Anne Willan