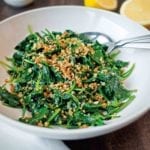 This sautéed spinach with bread crumbs is an easy, healthy side dish made with fresh spinach cooked with garlic and spritzed with lemon juice and toasted bread crumbs.
Liliana Battle

For the bread crumbs