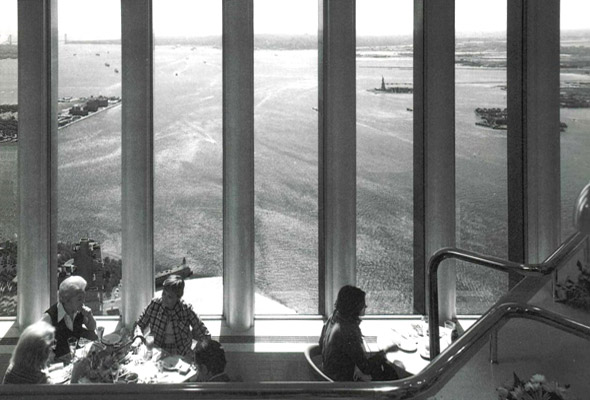 When the horrific memories of the World Trade Center attacks sometimes threaten to crowd out everything else, especially on the anniversary of 9/11, I call up a different, comforting memory shared by perhaps only several hundred people in the world:  sunrise from Windows on the World, on north tower’s 107th floor.

In the mid-’80s, I was a waiter at the Hors d’Oeuvrerie, the lounge and international café of Windows on the World, where women and men from around the globe came for perhaps a bit of then-unheard-of sashimi, after-dinner dessert and dancing, or the glittering, quarter-of-a-mile-high views of New York, New Jersey, and Connecticut.

Everyone from heads of state to rock stars to Broadway royalty visited the Hors d’Oeuvrerie on their way to or from Windows on the World’s main dining room, which faced uptown. Elegance and pedigree abounded, even among the staff: Waitresses wore satin sarongs and waiters bowed almost imperceptibly when greeting guests. The tall, silent piano player was rumored to be a protégé of Leonard Bernstein.

During the day, though, the Hors d’Oeuvrerie was a private club, a place to conduct business lunches and the newly popular power breakfasts. When a waiter made it through the gantlet of personnel interviews, he was handed a white, naval-style jacket—his day wear—and a schedule that included at least one breakfast shift a week.

Working dinner the night before a breakfast shift usually meant my head barely hit the pillow before I had to be up and at the restaurant by 5:30 a.m. Never a caffeine addict, I nonetheless needed a way to wake up, so I’d stumble to the dessert case and cut a generous slice of dacquoise, a delicate cake of hazelnut meringue layers with coffee buttercream filling. The dacquoise, which was made the day before, was best then; the crunchy meringue had softened into a slightly chewy nougat because of the filling. I’d install myself at one of the east-facing tables, and with my feet up and my fussy uniform falling open like a bathrobe, I’d watch and wait. My reflection would fade while the sky turned from black to gun-metal gray to a luminous mauve, as if the world had just discovered Technicolor. On the clearest of mornings, I could see almost 90 miles, or so the bartender would always tell me.

When I’m in downtown Manhattan these days, I look up and try to remember exactly where in the sky I entertained guests, patiently pointing out landmarks and boroughs, and where I never tired of those sunrise views. And how a day could begin so sweetly.