Homemade corned beef, and its corned beef seasoning mix, is crazy easy to make. It’s essentially brisket that’s given a makeover by letting it linger in an easy brine with spices and then slowly braised until falling-apart tender. Here’s how to make it (including a slow-cooker variation).

Homemade corned beef sort of defines Saint Patrick’s Day. And if you’ve heard of it but not experienced it, or maybe downed a few sandwiches of it but still aren’t exactly certain what corned beef is, it’s essentially brisket that’s lingered in a brine solution of corned beef seasonings for a few days. It becomes a little salty and a little redolent of spices and, as it turns out, it may be good for you.

See, its brine solution is essentially a pickling liquid. And you’ve certainly heard the buzz in recent years about how healthful pickled things are, yes? Ergo, the only logical thing to do is pickle and consume copious quantities of corned beef. Right?! Or if you don’t buy that, consider that once a year, we’re all Irish. Kindly note, you’ll need to start the corned beef about a week before you intend to sit down at the table. #worthit–David Leite

What is first cut brisket?

A whole primal brisket weighs 10 to 16 pounds and makes up two subprimal cuts that are divided by a layer of fat. The 5-to-9-pound “first cut,” sometimes called the “flat cut,” is one complete muscle and is relatively lean. The 5-to-7-pound “second cut,” aka the “point cut” contains more fat, or deckle, and sits on top. This recipe calls for first cut, but I’ve successfully made it with both cuts. 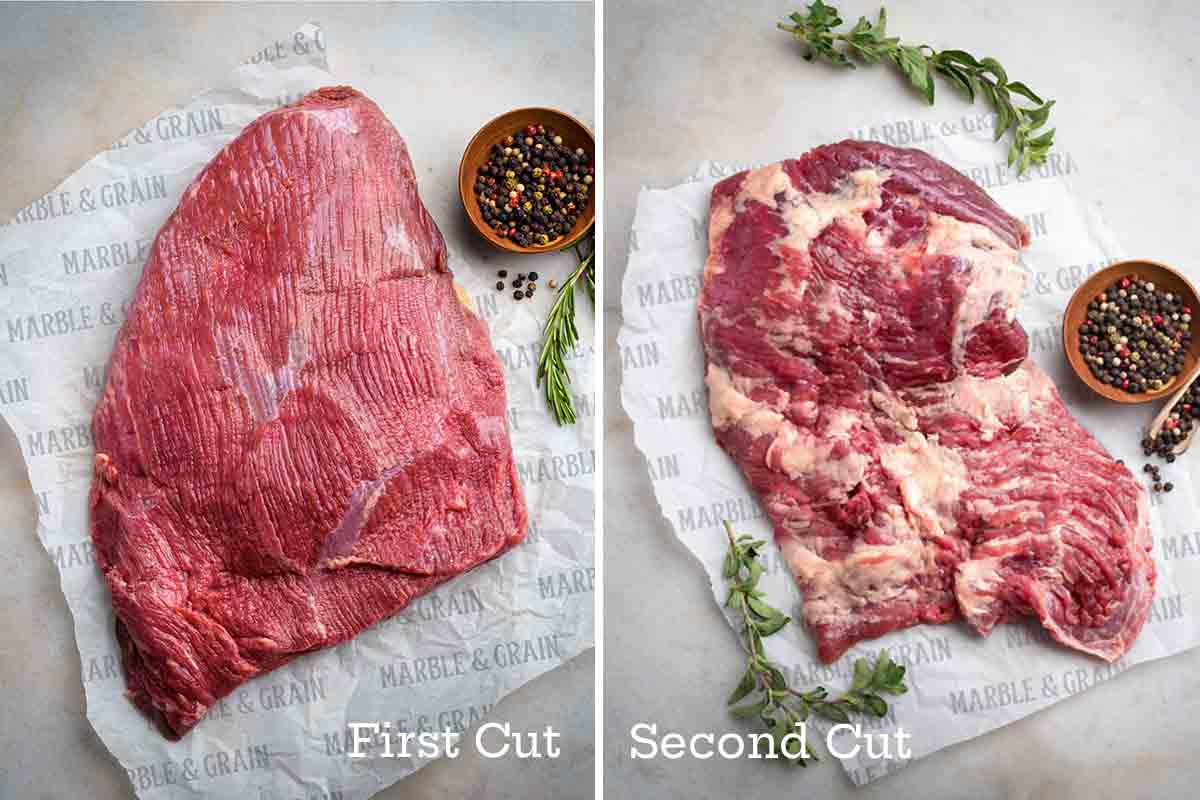 What is pink salt?

Pink salt is a curing salt containing nitrite. It does a few special things to meat: It changes the flavor, preserves the corned beef’s red color, prevents fats from developing rancid flavors, and–most importantly in home curing–prevents many bacteria from growing.

It’s sold under various brand names, including tinted cure mix (or T.C.M.), DQ Curing Salt, Prague Mix #1, Curing Salt #1, and Insta-Cure Salt #1. Do not buy Insta Cure #2, which is used for air-cured meats that aren’t cooked, such as pepperoni, hard salami, genoa salami, prosciutti hams, dried farmers sausage, capicola, and the like. And don’t confuse this pink salt with Himalayan pink salt, which is entirely different. 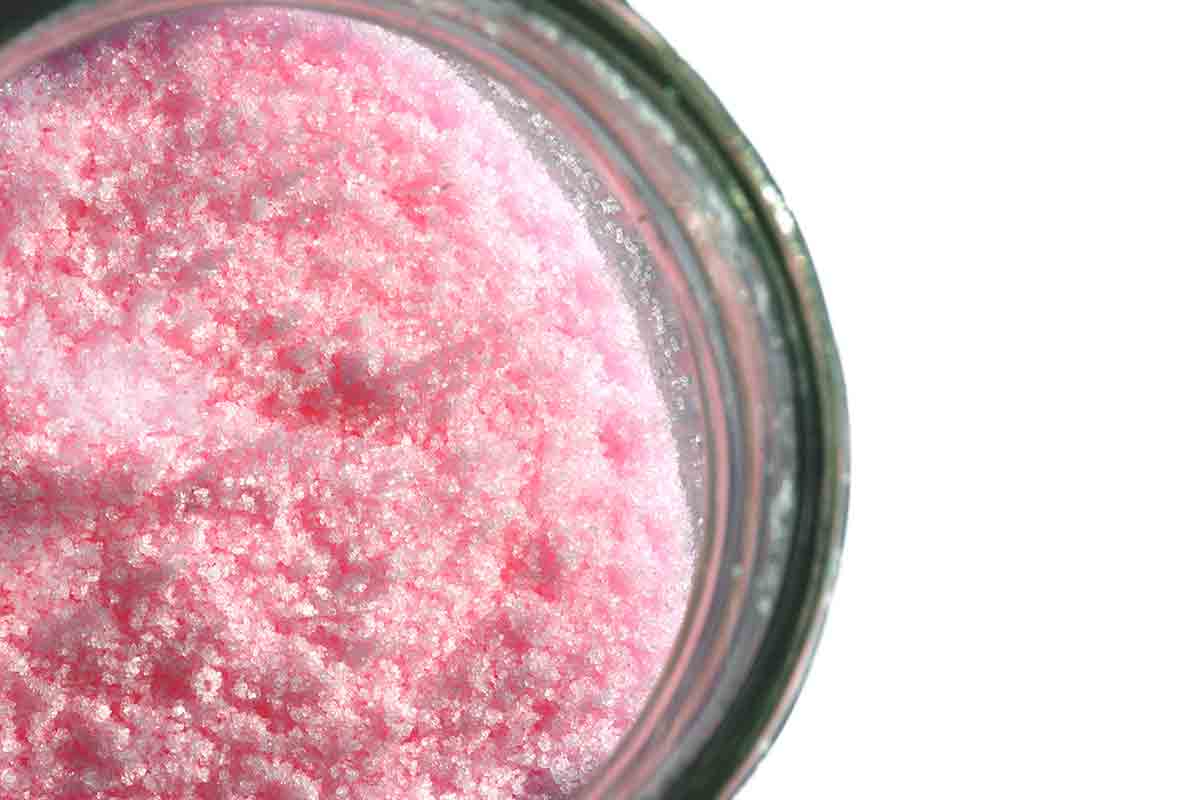 How can I make this into corned beef and cabbage?

To make corned beef with cabbage and potatoes, first, render the fat from some bacon that you’ve cut into matchstick-size strips or any size dice in a large saucepan or pot over medium heat. Toss in some large wedges or large chunks of green cabbage and cook, turning as needed, until the edges are lightly browned. This will impart a little extra flavor oomph to the cabbage.

Add some of the reserved cooking liquid from the corned beef to the pot. Then toss some chunked potatoes and the sliced corned beef in with the cabbage, cover, and cook until the cabbage is tender. (If you prefer the potatoes not pick up any cabbage flavor or color, boil them separately in salted water.) Either way, cover and cook until the cabbage and potatoes are tender. The liquid that steams the cabbage then becomes a delicious sauce into which you can, if you like, stir a tablespoon of Dijon mustard. 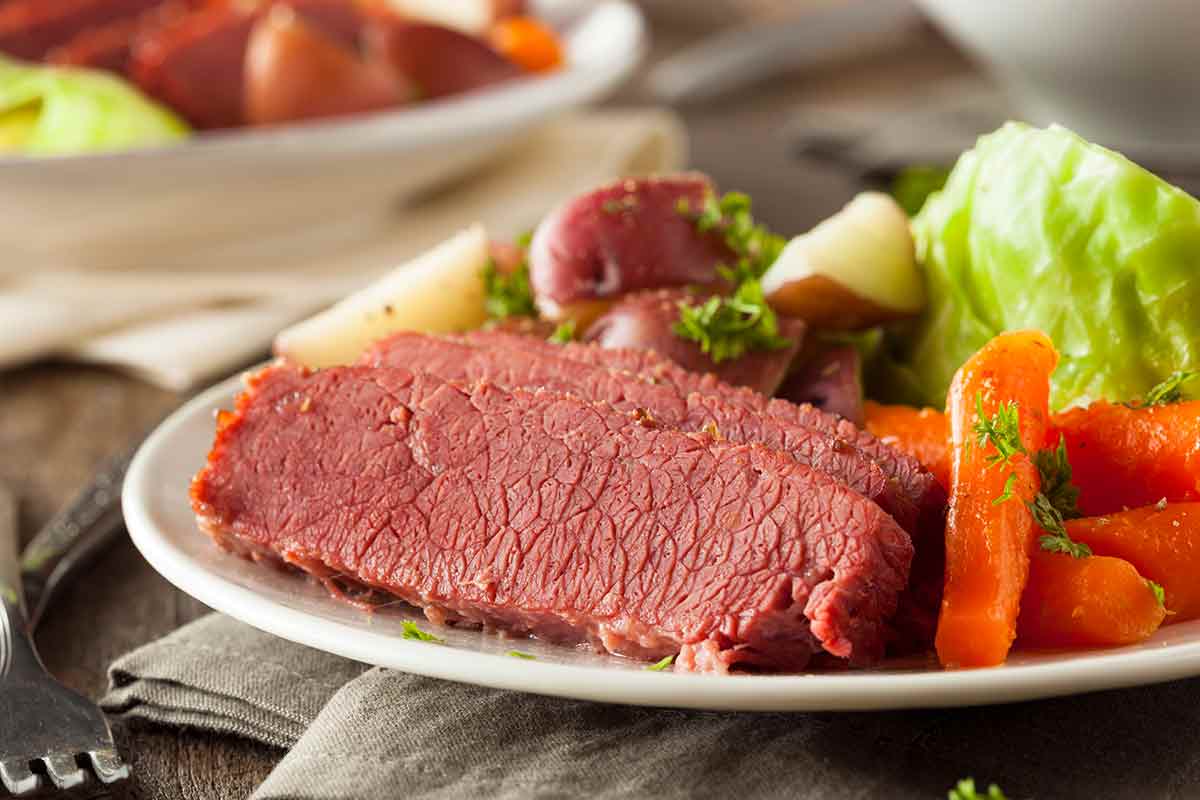 How can I cook this in a slow-cooker?

Place the brined brisket inside your slow cooker and add enough water to cover the meat. If the entire brisket won’t fit, cut off a smaller portion that will fit and reserve the remaining brined brisket. Add 2 tablespoons of the corned beef seasoning pickling mix to the slow cooker and cook on low until the brisket is fork-tender, about 7 hours. Remove it from the cooking liquid, which can be reserved for serving if desired.

Slice the corned beef and serve it warm or cool it, wrap it, and refrigerate it for up to a week. Curious to hear more about coaxing the perfect corned beef from your slow cooker? Check out what our tester Jackie G. had to say in her TC comment below. (Spoiler alert: She turned her leftover brined brisket into homemade pastrami, natch.)

Corned beef seasoning mixes, or pickling spices, vary from cook to cook. But it’s safe to say that black peppercorns, mustard seeds, coriander seeds, allspice, mace, cinnamon, bay leaf, clove, and ginger will be part of it. Ours adds crushed red-pepper flakes for a wee bit of heat. 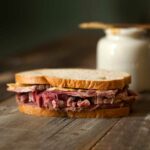 Homemade corned beef is crazy easy to make. It's essentially brisket that's given a makeover by letting it linger in an easy brine with spices and then slowly braised until falling-apart tender. Here's how to make it (including a slow-cooker variation).
Prep 30 mins
Cook 3 hrs
Total 5 d 3 hrs
Mains
Irish
10 servings | 4.5 lbs
309 kcal
4.94 / 45 votes
Print Recipe 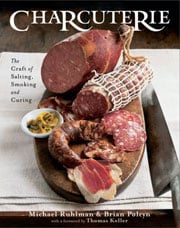 For the pickling spice

For the brine solution

This homemade corned beef recipe is so damn good, it's almost enough to make me consider converting back to Catholicism. The One and I absolutely love it. I've been making this recipe from Michael Ruhlman for years, and of course, I whip it up every St. Patty's Day. (The first photo below is me going rogue. Instead of using first-cut brisket, I used the uber-fatty second cut, as it was all I had in the freezer. I trimmed much of the fat cap. We'll see how it turns out. Stay tuned.) Over the years, I’ve played around a little with the brine ingredients: more bay leaves, a bit more ginger, more peppercorns. I don’t particularly like corned beef and cabbage, so The One and I go straight to corned beef sandwiches or Reuben sandwiches and, naturally, corned beef hash. When the weather warms up—will it ever happen, God? (I told you I get really religious-y around corned beef-time)—I want to make pastrami, which is really just a smoked cousin of corned beef. 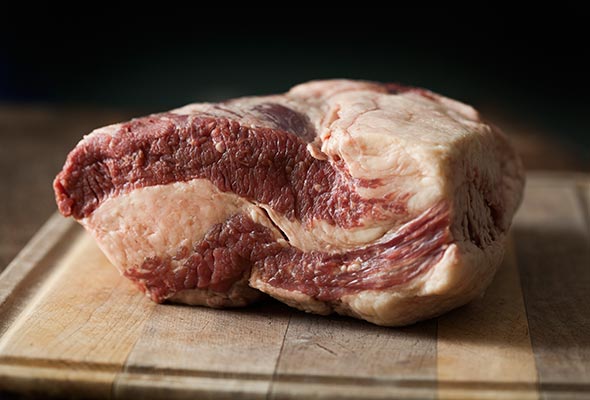 Well, using the second cut proved to be a wise move. You can always get rid of fat, but you can't add it. Judicious trimming prior to brining and careful carving after the meat was cooked yielded juicy, tender, memorable corned beef--the best I've ever made (below). So from here on out, it's second cut for us. 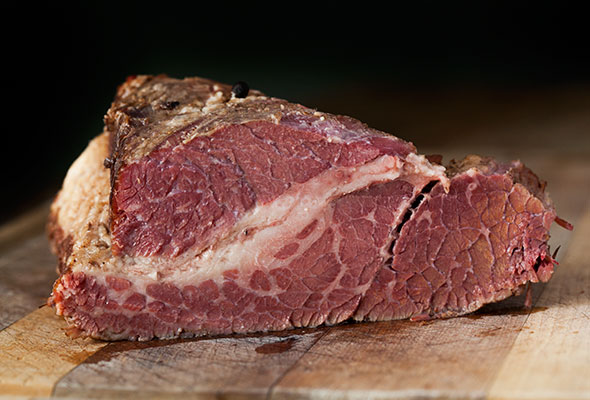 This homemade corned beef is amazing and very simple to make. In my excitement to try this, I hadn’t read over the list of ingredients very well, so as I was putting the corned beef seasoning brine together, I realized that I didn’t have the recommended pink salt that the author calls for in the recipe. I noticed in one of the comments that he mentions the salt isn’t necessary, so I continued on without it. Six days later, we sat down to the most amazing corned beef any of us had ever experienced.

One of my testers, who claims to be a corned beef snob, said, “Although I would have preferred it a bit saltier, it was one of the best that I have ever had.”

I will never buy corned beef again after making this recipe. Turns out, pickling even substandard brisket with this astounding potpourri of aromatic spices will change your life forever!

I was very concerned that my brisket was going to be not good enough because when I got it home, I realized that it was graded select. I made the recipe anyways but put a layer of plastic wrap on top of the brine and brisket and then added the plate to hold it all together. I was surprised at the ease with which this came together and truly astonished at the final result.

I found the simplest way to acquire the pink salt was on Amazon. For around $10, you’ll secure enough for many, many pounds of homemade bacon and corned beef.

I decided to make the “real thing” for St. Patty’s Day this year and brined a 6-pound, well-marbled, first-cut beef brisket.

After its bath in the corned beef seasoning brine for 5 days, I decided to cook the brisket in our slow cooker instead of on top of the stove. I couldn’t fit the entire brisket in my 5 1/2-quart slow cooker, so a 3-pound chunk went into the slow cooker and the rest went back into the fridge. At first, the brisket was submerged under the water. When I checked to see how it was doing after 1 1/2 hours, the meat had curled up and was sticking out of the water. I pushed it down, but wasn’t terribly concerned because brisket tends to shrink quite a bit. Sure enough, after 30 more minutes, the brisket was, indeed, covered with liquid.

The brisket cooked for a total of 7 hours on low. I suggest you check to see how the meat is doing along the way, even though some folks warn that you should never lift the lid of a slow cooker. I find that it does not add much cooking time at all. For me, and this particular piece of meat, at that 7 hour mark, the corned beef was tender.

Alongside the brisket I served a casserole of chopped potatoes, cabbage, and onion, which I’d sautéed in bacon fat and then finished in the oven with some Comté cheese on top. As much as we enjoyed the brisket on the first night with the casserole, we enjoyed the leftovers even more. I made this wonderful corned beef hash twice and served it with poached eggs.

So, what to do with the other remaining brisket that didn’t fit in the slow cooker? There was no question. When life gives you brined brisket, make pastrami. We were as amazed by this recipe as we were the first time we made it. Smoked corned beef brisket. The makings for some fabulous sandwiches. For a riff on a traditional Reuben, try cole slaw and Russian dressing on rye bread with or without Swiss cheese (again, Comté for us) and grilled till oozy.