Skip to content
Home » Writings » What’s the Difference Between Stuffing and Dressing?

What’s the difference between stuffing and dressing explains the main distinction that causes arguments at the Thanksgiving table each year. 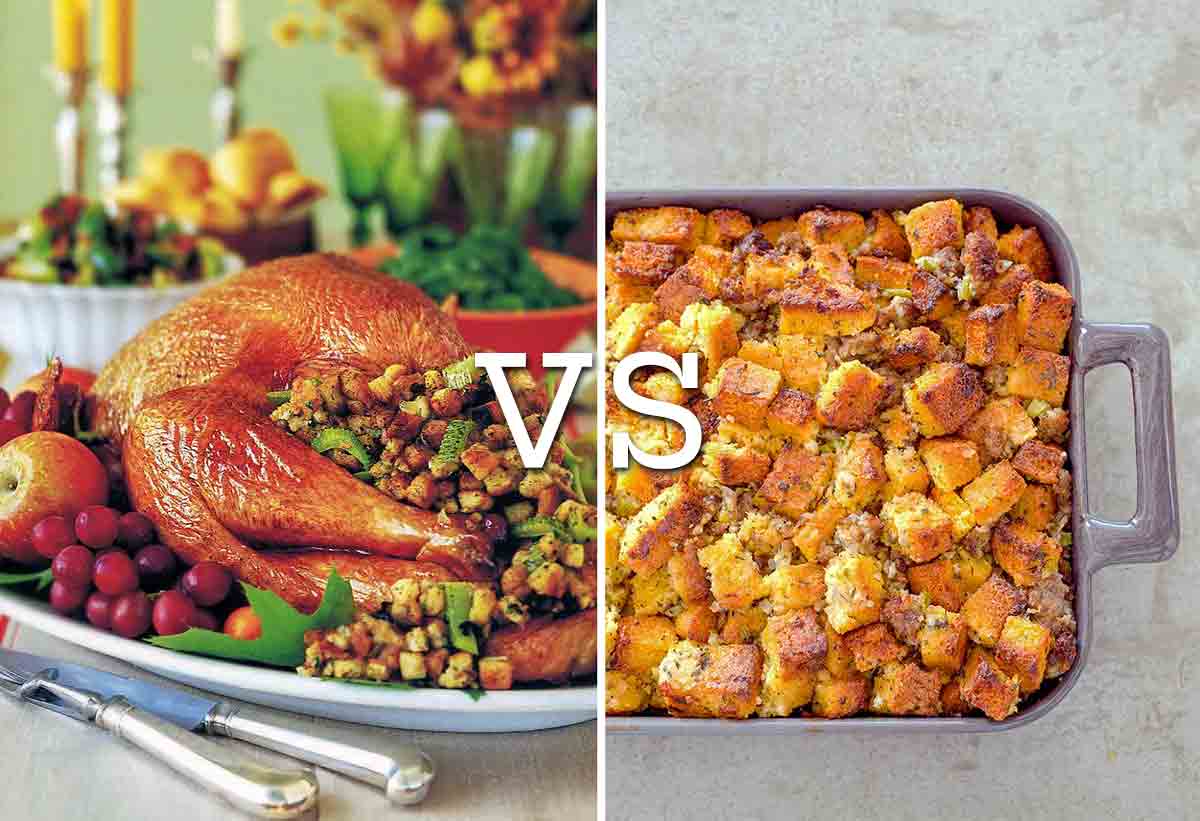 We’re not inclined to throw ourselves into any of the arguments that take place at your Thanksgiving table. Except for one. Namely, what the heck is the difference between stuffing and dressing?

The answer can actually be found in the name. Technically, “stuffing” is a concoction of bread, stock, and herbs that’s stuffed (get it?) into the cavity of the turkey and roasted inside the hen, whereas “dressing” is simply that same bread mixture crammed into a baking dish and roasted outside of the hen.

Sorta simple. Except that not a lot of us know this fact. So the names tend to be used interchangeably, whether out of habit or reverence for regional tradition. The way most folks throughout the country refer to bread and herbs in any proximity to a hen is “stuffing,” though in the South, by default, it’s dubbed “dressing.” Historians say the latter, a somewhat more refined reference, dates back several centuries to when a cut of meat was “dressed” for cooking.

Nomenclature aside, which approach makes for more satisfying results on the Thanksgiving table is tricky business that’s burdened with family tradition, food safety, and personal preference. Below, we share a few pros and cons and how-tos for each approach. Whichever you choose, be kind to those at the table with differing opinions. And as to what you call a vegetarian version of Thanksgiving dinner made with roasted winter squash halves mounded high with stuffing or dressing, we’re not going to touch that. Use your judgment. Or use that as fodder for your family argument this Thanksgiving.

As the turkey roasts, it infuses the stuffing with its poultry-ness. You don’t get this with dressing.

Stuffing takes up less space in the oven on Thanksgiving day since there’s no need for a separate baking dish.

Those turkey juices that drip into your stuffing are, essentially, raw poultry that need to be heated until the innermost part of the stuffing reaches the same internal temperature as the turkey meat before you take it out of the oven to be safe to consume. Otherwise, you could spend Thanksgiving night in a very unpleasant fashion.

If you have a favorite dressing recipe that you want to convert to stuffing, go ahead and stuff the bird and roast it according to your turkey recipe. Stuffing is quite forgiving in terms of the exact temperature and timing in terms of it not being particular as to the precise temperature at which it’s warmed. Just note that the stuffing will be infused with raw poultry juices. You’ll absolutely need to ensure that it remains in the oven until an instant-read thermometer inserted into the innermost part of the stuffing reaches the same internal temperature as the thickest part of the turkey thigh (namely, 165°F | 75°C) before being safe to consume. 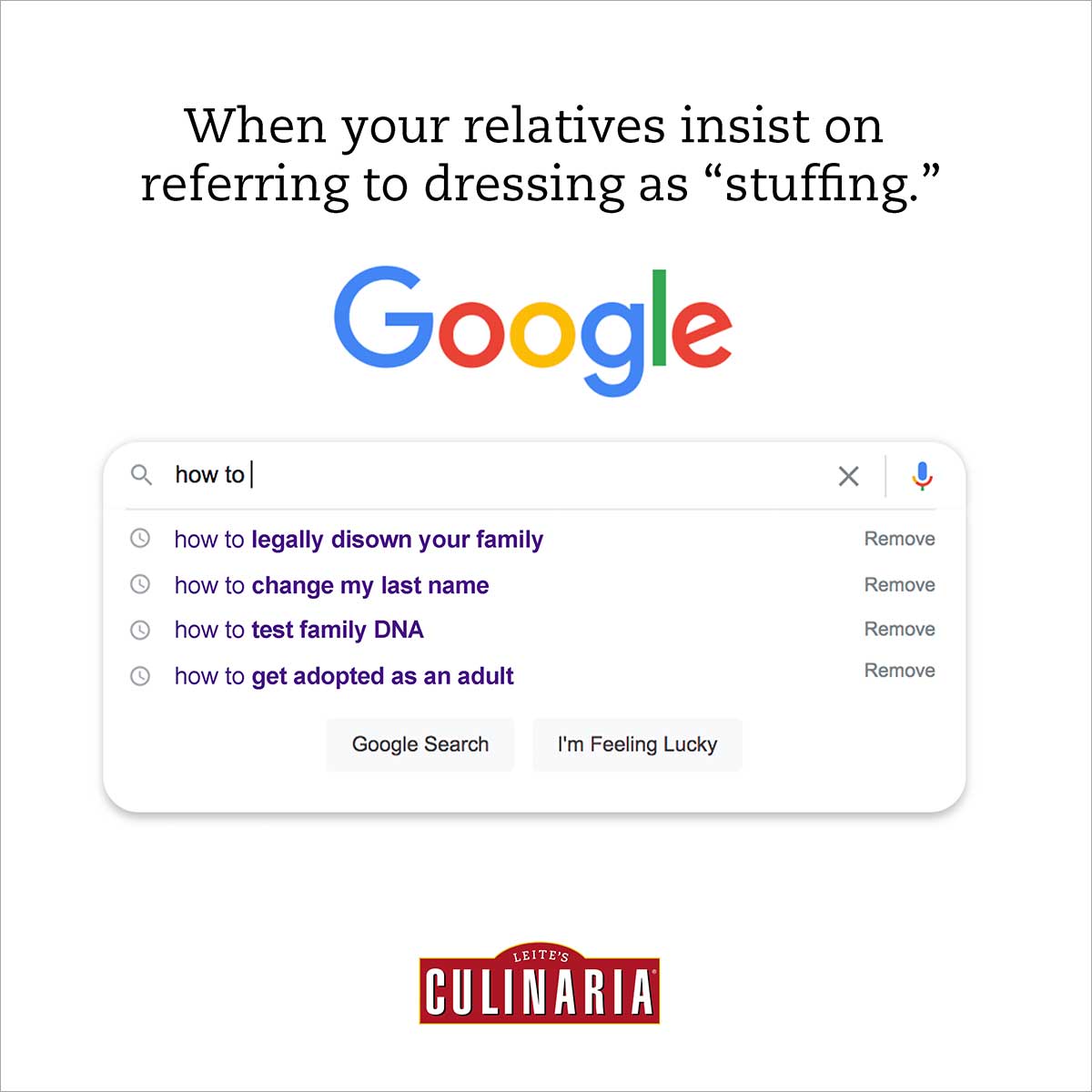 When the surface of dressing is exposed to the blast of heat from the oven, you get a lovely textural contrast. As Chef Tom Douglas explained in our Thanksgiving podcast, “Thanksgiving, if you do it the traditional way, ends up being a big blob on the plate—mashed potatoes, soft sweet potatoes, turkey, gravy. I’ll do my stuffing in a casserole and let the edges get crispy, brown, and golden and crunchy.”

Very little risk of illness or death (outside of choking when you attempt to eat a forkful and laugh at your uncle’s joke at the same time).

For those who prefer a more pronounced poultry taste to their dressing than what’s in poultry seasoning, there are no drippings from the turkey that infuse the stuffing during cooking. (Although that’s sorta why gravy was created.)

There can be a tendency for dressing to dry out in the oven, although you can always cover it with foil for part or all of the time it’s in the oven. And a drizzle of warm stock or melted butter when the dressing comes out of the oven can work magic.

If you have a favorite stuffing recipe that you want to convert to dressing, simply heap it into a buttered baking dish or cast iron skillet and slide it in the oven along with everything else. Almost any oven temperature will suffice as you simply need to warm it through, so set it where you need it for other side dishes and plan on 30 to 45 minutes or so in the oven. If you prefer a moist dressing through and through without a crunchy surface, cover the dressing with foil throughout baking.