Nashville hot fried chicken boasts just the right level of heat which it takes from a bath of buttermilk and habanero sauce. It’s the style served at Prince’s Hot Chicken down South. Here’s how to make it at home.

Hot and spicy enough to make you holler. That’s what we think about this Nashville hot fried chicken. Which is exactly how they like their fried chicken in Nashville. The folks who crafted this recipe rely on Tabasco hot sauce for the Nashville-style hot chicken experience. But that doesn’t mean you can’t tweak tradition if you fancy an alternate hot sauce. It’s all good. Really, really good.–Renee Schettler Rossi 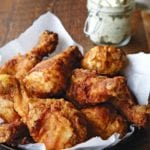 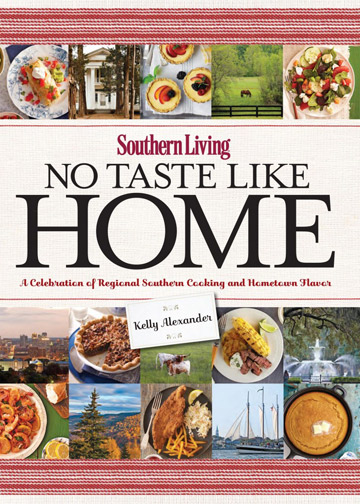 I am in love with this Nashville hot fried chicken recipe. It came out of the oven nice and crispy. I tested this recipe with Frank’s Original Hot Sauce, and it wasn’t hot enough for me, so I doused it with more hot sauce. I will be keeping this in my repertoire of recipes.

This Nashville hot fried chicken recipe is a GREAT chicken dish. I stuck to the recipe exactly and the results were stellar. I used a sauce called El Yucateco. If you like HOT, you will LOVE this!

I have to say, I’m not a big fan of fried foods. That doesn’t mean I don’t like eating fried food, just not a fan of the oily mess you have to clean up afterwards. In making this Nashville hot fried chicken recipe, I expected to make a mess, so I was surprised when I really didn’t. The resulting chicken was crisp, insanely juicy, tender, and flavorful. Here are a few tweaks and observations I made along my deep fried journey:

Hot Sauce. First, I couldn’t bear to use an entire 5-ounce bottle of my favorite hot sauce, Youk’s of San Francisco. So instead I used Crystal Hot Sauce, which I love and is my go-to fried chicken hot sauce. While it doesn’t pack the same heat as habanero hot sauce, it still possesses a mighty fiery, tasty punch. (I know, hot chicken purists are probably gasping right now, but I like what I like.)

Bowl Versus Zipper Bag. The recipe calls for mixing your ingredients in a bowl and then dunking the chicken into it and popping it in the fridge. I used a resealable plastic bag, which worked perfectly. Plus, when the chicken was done marinating, I was able to toss the whole bag in the trash. (I’m all about easy.)

Cook Time. I do get slightly paranoid when I’m cooking chicken, especially with so many recalls these days, so I used the longest frying time, which was 8 minutes. I flipped the chicken over every 2 minutes, which gave me a beautiful golden brown color. Seriously, this chicken looked amazing! I also finished the chicken in the oven for 15 minutes, which is when it registered 180°F on an instant-read thermometer. My chicken was so moist the juices were flowing down my fingers and onto my plate.

No Mess. I’m pretty sure the fact that the chicken is fried at a lower temperature and then finished in the oven was why there wasn’t the usual spatter, hiss, and pop when dropping cold, wet food into a vat of hot oil.

For Next Time. When I remove the chicken from the bag next time, I’ll let it drip dry a spell before adding it to the flour dredge. On a couple of the pieces, the crust was coming off where the chicken was really wet with marinade. Just an observation.

This Nashville hot fried chicken recipe sounded perfect and requires little time aside from the marinating. I used Tabasco Habanero Sauce, which gave a fiery, almost too hot, heat to the chicken. I cooked the chicken in the skillet for 8 minutes and finished it in the oven for 12 minutes. The chicken came out moist and juicy.

Well. Wow. We like spicy food in our house, and this Nashville hot fried chicken recipe delivers a heck of a wallop. I made the first batch as written, and although my husband gobbled it down, my son and I couldn’t handle the heat. I then doubled the amount of buttermilk, used half the amount of hot sauce, and marinated the chicken for only 4 hours. This imparted heat and flavor without overwhelming me or my son, and my husband still gobbled it up. Success! We have a huge supply of hot sauces in our pantry, and I can’t wait to try this recipe using different ones for variation. Each time I’ve made this, I placed the buttermilk and chicken in a large, shallow baking dish and turned it every few hours. (I found piling the drumsticks in a large bowl with the small amount of buttermilk on the bottom made for messy and tedious stirring to coat. with only the very bottom drumsticks being submerged.) The flour mixture was delicious and I will continue to use it for regular fried chicken.

Where do I start about this Nashville hot fried chicken recipe? This was a very tasty, juicy chicken. I was expecting it to be really spicy, so I decided to make a second, less spicy batch for my daughters by adding only half the amount of hot sauce. I used Trader Joe’s Chili Pepper Sauce, which I tasted straight from the bottle and found to be pretty spicy. Truthfully, to really give the chicken a nice kick, I’d add actual chile peppers or use a much stronger, spicier sauce next time. My daughters were actually able to eat our “adult” batch. The time for frying in the skillet was spot on and turned the chicken a gorgeous golden brown color. Also, the chicken took 7 more minutes in the oven, perhaps because the drumsticks were so big. The final result, though, was a very juicy chicken with a nice crispiness on the outside. The 6 pounds ended up feeding us for dinner as well as lunch the following day. Next time, I’d like to use wings to see if the spiciness will penetrate the meat and not just the skin.

I’d never made fried chicken before, so I was drawn to the challenge of making it for guests. Wow! My chicken looked exactly like the photo, which for some reason really shocked me. What was even more amazing was the taste—totally moist, juicy chicken with awesomely crispy skin. The only thing I’d do differently the next time I make this recipe would be to use Tabasco brand habanero sauce—the one I bought didn’t have enough heat for my liking. Otherwise, the dish was perfect! Hardly any leftovers, and I made a double batch! Success!