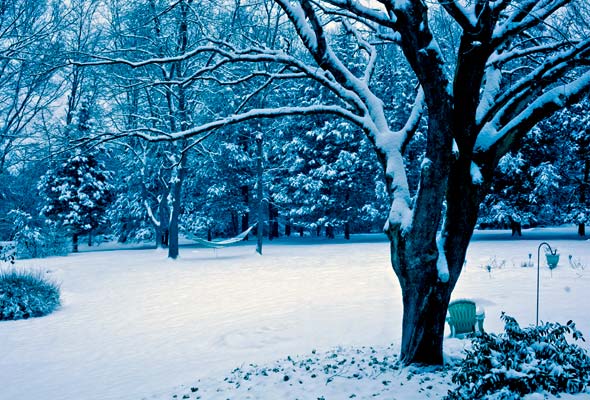 Sometimes I think my cat is better than my doctor at prescribing what I need.

Early Wednesday morning, Devil Cat woke me at 3 a.m. wanting to play, as he does every morning when we’re in Connecticut. It was our usual dance number—he leading, me following, of course. First he used his claws to pull himself across the rug—I guess you could call this his floor routine. Then he jumped on the bed and kneaded my chest with his lethal weapons, which he just honed on the rug. When I couldn’t take it anymore, we quickly two-stepped to the bathroom, dancing on each other’s feet, where he figure-eighted between my legs while I winced bleary-eyed into the mirror to see how much blood he’d drawn from my chest.

With only a few hours of darkness left to enjoy, I lured him into the hall with my naked foot as bait, then I slammed the bedroom door shut. Not 10 minutes later, he was crooning a plaintive, distinctly Irish-sounding ballad that I’m pretty certain featured feline lyrics along the lines of “Da ole son of a bitch locked me outta me room while all I was tryin’ to do was love ‘im.”

The One was completely oblivious to this performance, given that he was 80 miles way in New York, wiped out from having to care for our little Persian, Chloe, who is terribly sick. The situation with Chloe has flat out exhausted us. We’re both running on fumes what with toting her to the vet; trying to pill her; coaxing her out from under the bed so Emmy, the vet tech, can administer fluids under her skin to keep her hydrated—all four pounds, five ounces of her; and tag-teaming back and forth between New York and Connecticut so one of us can be with Devil Cat.

Now fully awake, I opened the door. But instead of bounding in and bouncing on the bed, not unlike Sylvester in Loony Tunes, Devil Cat looked up at me then ran downstairs lickety-split.

Please, God, no! I screamed to myself, visions of a closed basement door, his only route to the outdoors—and piles of pussycat presents throughout the house flickered on the screen of my sleep-deprived mind.

Turns out Devil Cat was hungry. Again. So I opened the fridge and fished out one of the cans of tuna that we use to mask the antibiotics Chloe has to take if she’s to have any chance of beating this infection. I slid down to the floor, back against the cabinet, can and fork in hand. One bite for Devil Cat, one for me. One for Devil Cat, two for me. And there we stayed, Devil Cat eventually ending up upside-down in my lap, paws twitching to some dream sequence samba that surely involved rodents now that his belly was full.

After an hour or so, I extricated myself from beneath him and figured I might as well work since I couldn’t go back to sleep. I sat in my studio with its five large windows looking out onto our property and realized it had snowed. I’ve already told you how much The One and I adore snow. The backyard was beautiful, but dark. I could barely make out the knuckles and crooked fingers of the old oak’s branches. Way in the back was the hammock–still hanging between two trees–always looking to me like a gentle smile, though today it sported a John Waters-thin mustache of white.

I don’t like predawn. It’s feels empty. Mournful. And it makes me feel out of sorts and awkward, like being the first one to arrive at a party. But yesterday was different. I watched as the sun, from behind a quilt of clouds, began to light the yard with a lovely blue chiaroscuro.

Devil Cat jumped up on my desk. I expected him to do his other routine, the one where he circles between my arms while I type, me dodging his tail and kitty parts until he settles in and falls asleep. This time, though, he leaned his head against my arm and extended his paw into my hand as if to say, “Stop working, poppie. Just sit here and breathe and watch.” I was flabbergasted.

So I looked out the windows. And I wondered why it is that I like snow so much. It’s undeniably pretty, at least when it first falls. And it’s cold, of course, and I like the cold. But beyond aesthetics and temperature, there’s an emotional component to snow for me. When it falls, I feel safe and protected–as if no harm could ever come to me. It’s a salve that soothes the ache of pain, a white gauze that covers the scars of loss that would–very soon–be ripped open once again.

That’s when the gut-shaking sobs came and came and came. But instead of jumping down with a feline equivalent of a disgusted grunt, Devil Cat did the most remarkable thing: He rolled over in my arms, placed one paw on my cheek, and just looked at me. It was a simple gesture, unblinking, undemanding. A tangle of gratitude and guilt knotted inside me. We were so lucky, blessed even, to have rescued this marvelous animal–as we had rescued Chloe and Raja–yet I wasn’t with Chloe when she needed me most.

Eventually Devil Cat leapt off the desk. Several minutes later I heard the thwack and metronomic squeak of his cat door opening and closing. I watched as he ran to his favorite tree and filed those damn Edward Scissorhands blades that constitute his claws, then Iooked on as he terrorized a few sparrows that dotted the snow like ink dripped from a fountain pen. I knocked on the window and he froze, seemingly sniffing the air for the origin of the sound. He saw me and I waved. He sat down, watching me, almost as if he were making sure I was okay. Then he turned and walked away with that gunslinger walk of his through the brush on his rounds, and I smiled.