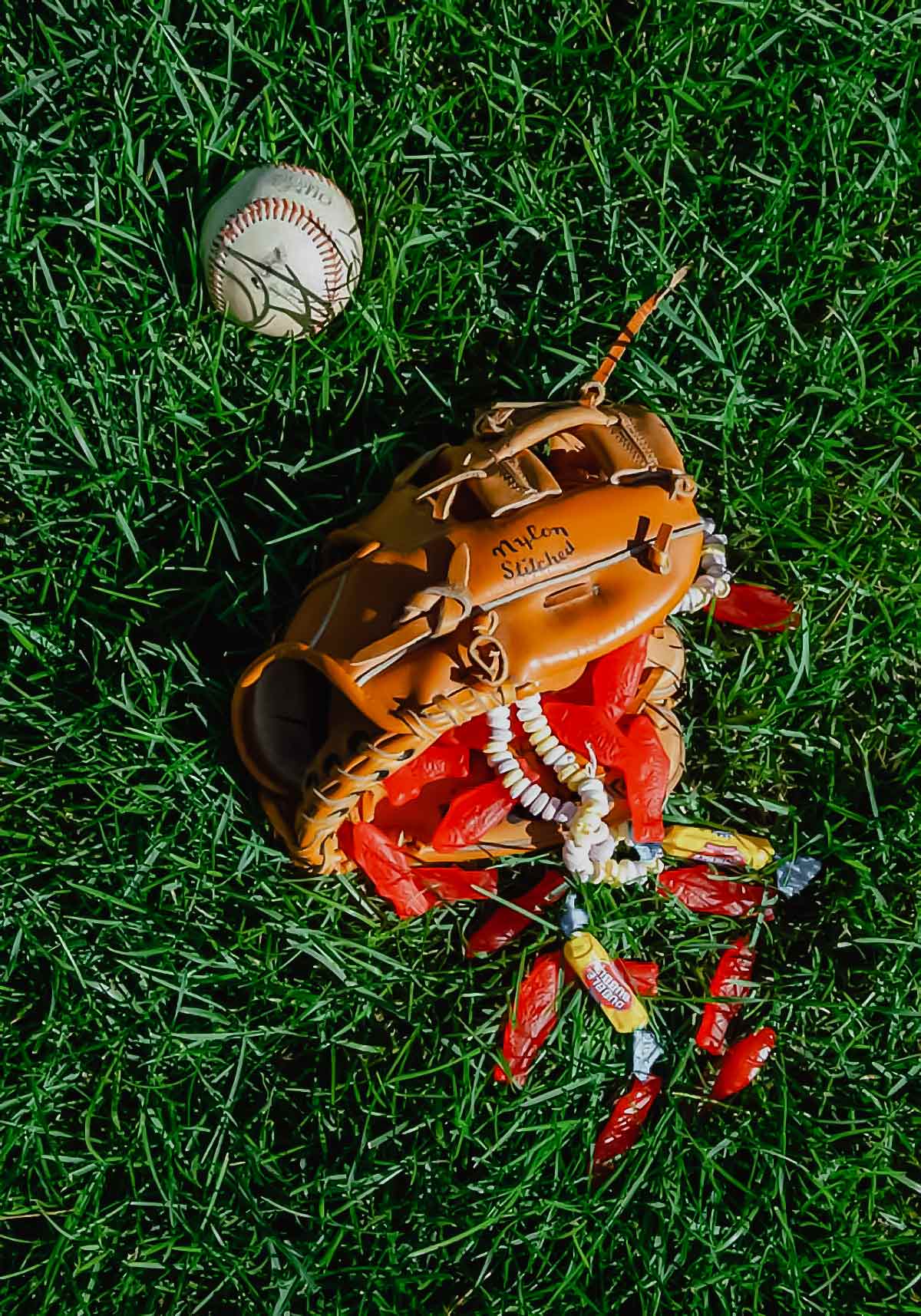 I have a problem with balls. I can’t catch them, I can’t hold on to them, and I certainly can’t throw them. But apparently, balls don’t have a problem with me. They seem drawn to me. I could be walking by a playing field, a tennis court, even a neighbor’s yard, and balls of all sorts would inevitably seek me out.

This unusual Law of Attraction started the summer when I was 11 years old and played right field in the Swansea Little League. (Or was it left field? I can never get it straight. You know, that spot beyond first base?) I never wanted to be on a baseball team. In fact, I loathed the very idea. But it was my parents’ way of trying to assimilate me with other boys and get me out of the house.

Not long before, I had walked up to my father while he was reading the newspaper on a Sunday afternoon and said, “Daddy, I think I’m a drug addict.”

He slowly lowered his paper and his La-Z-Boy. He looked over my head to my mother. Then he looked at me. “Why do you say that, son?” He was gentle, a hand on my arm.

I explained that we had been given a handout in school that listed the possible signs of preteen and teen drug addiction. One of them was spending excessive time alone, especially in a bedroom behind closed doors. Because of squalls of anxiety that were storming through my body, I had often locked myself in my room alone.

“Have you taken any drugs?”

“No, of course not,” I replied, a bit offended. What a ridiculous question.

“Son,” my mother said, “you have nothing to worry about then.”

“Banana, if you haven’t taken drugs, you can’t be a drug addict,” she said, her index fingers banging together like two Twix Bars. “It goes together.”

“But I’m worried I will become a drug addict because I spend so much time alone.” Their seeing my utter lack of comprehension about how the world worked and being starkly reminded of just how often I actually was holed up in my room is how I ended up in Little League.

Practices were miserable for me. My teammates would roll their eyes and laugh when I tossed the ball. (“You throw like a girl, Leite.”) Or when I was up at bat. (“My grandmother could swing better than that, Leite!”) And especially when I was catching and missed a pop fly. (“Hey, Magoo, you need glasses?”) Because no boy was ever turned away from Little League back then, Mr. Hibert, our coach, minimized the damage I could do by placing me behind first base, where no batter ever hit a ball.

We were in last place most of the season. To cope with the boredom I felt out there, I’d hold my glove up and chew on the leather cords that stitched it together. I’d gnaw away as I watched grounders speed toward shortstop only to be scooped up and pegged at first base. “Out!” the umpire would shout. Or while I observed pop flies arc like fireworks over center field, with the kid who played that position backing up, up, up and catching it, but not before several players made their way around the bases. Sometimes, with my glove up to my mouth, I’d even sing softly to myself—mostly Tony Orlando and Dawn or the Osmonds.

I don’t know how I got the idea of eating in the outfield, but once I did, the games practically became a spectator sport for me. There was a concession stand behind the bleachers, and before a game, I’d beg money from my parents, who went to every single game and, bless them, refrained from wincing while I played. I’d stock up on Swedish Fish, candy necklaces, red shoestring licorice, Sweet Tarts, and bubble gum. I’d unwrap everything, toss the wrappers, and stuff the candy into a small brown paper bag. I’d fit the bag into the crook of my glove, and while it appeared to everyone that I was bored and chewing my glove, I was actually enjoying a veritable panoply of childhood delights.

Toward the end of the season, I was in my usual place in the outfield, my glove overflowing with my sweet stash. I was counting down the games until this torture was over and I could toss out my glove for good. And then it happened. A crack of the bat that sent the ball arcing my way. Right field?! The batter was a right-hander. No right-hander had ever popped one into right field. I panicked.

“Catch it, Dave!” everyone was screaming. “Catch it.” My parents stood up, my mother clutching my father’s arm. I made my decision. I raised my glove high above my head and cupped the back of it with my left hand, like Mr. Hibert had taught me. The candy rained down on me, and I turned my face away and missed the ball, which landed about three feet from me. Laughter broke out everywhere.

“Throw it! Throw it!” I picked up the ball and, adrenaline pumping, lobbed it so hard and high it missed the first baseman and hit the ground near the catcher. He beaned it to second base, but it was too late. The batter had made it to third base. I was humiliated. Sitting on the bench, I ignored the taunts of the boys on the other team and the cold shoulder from my teammates.

During one of the last games that season, I was holding down the outfield and praying for rain when a lightening strike of the bat sent the ball careening right into the balls of our pitcher, Kevin Kraska. He crumpled. Everyone crowded the mound like ants feasting on picnic droppings. I was the only one who stayed in the outfield. Mr. Hibert and, I think, Mr. Kraska helped Kevin back to the bench.

Mr. Hibert motioned the first basemen over to the mound. “You pitch.”

“It doesn’t make a difference now, let’s just mix it up,” he said, his arm twirling above his head. “Outfield in, infield out.” He pointed at me: “Leite, first base.” I stuffed the candy in my pockets and trotted over.

I have no idea how long I stood there, but I don’t remember doing anything until a pop fly came my way. Catching this might somehow erase the rancid humiliation of my previous failures. I put up my hand, all eyes on me. And then I calmly lowered my glove. It was as if time slowed to molasses. The ball plopped down next to me, and I watched as several boys dove alongside me trying to grab it. Mr. Hibert was nonplussed. The ball relayed from boy to boy to boy, but it never outran the batter as he rounded the bases and slid into home. The opposing team jumped and hugged each other.

I never played Little League again. But it was then that balls began dropping out of the heavens at my feet. In high school, I’d purposely walk, with my head down, out of my way to avoid the playing fields, yet there I would stand, staring at a baseball, football, soccer ball, or tennis ball between my feet, someone yelling at me to throw it back. And I’d have a decision to make: Do I throw it to them and risk once again the sexist chant, “You throw like a girl!” or do I simply walk on?

In my twenties, it grew easier to ignore players’ shouts, especially with the advent of the Walkman. I could claim not to hear anything but the soulful lyrics of Anita Baker or Chet Baker—and then, being so moved by the music, I would step right over the ball and pretend not to notice that it was there.

Nowadays when I tell this story, friends sometimes ask me to prove it. So I walk them to the Great Lawn in Central Park, where teams are always playing.

“Watch,” I say. We’ll start along the perimeter of the grass and, inevitably, a ball will roll right across my path. I look to my friends, who shake their heads, dumbstruck. “I told you,” I say.

“Throw it over the fence, will ya?” “Can you toss that?” “Dude, pass it over,” come the pleas. I just look over at the field, smile, and walk on.

Then I count to one, two, three and, sure enough, “Asswipe!” or some similar insult is volleyed at me. And I laugh. Originally published August 28, 2015.