This homemade matzoh couldn’t be simpler and tastes incomparably better than the stuff you buy in a box. Here’s how to make it from scratch. 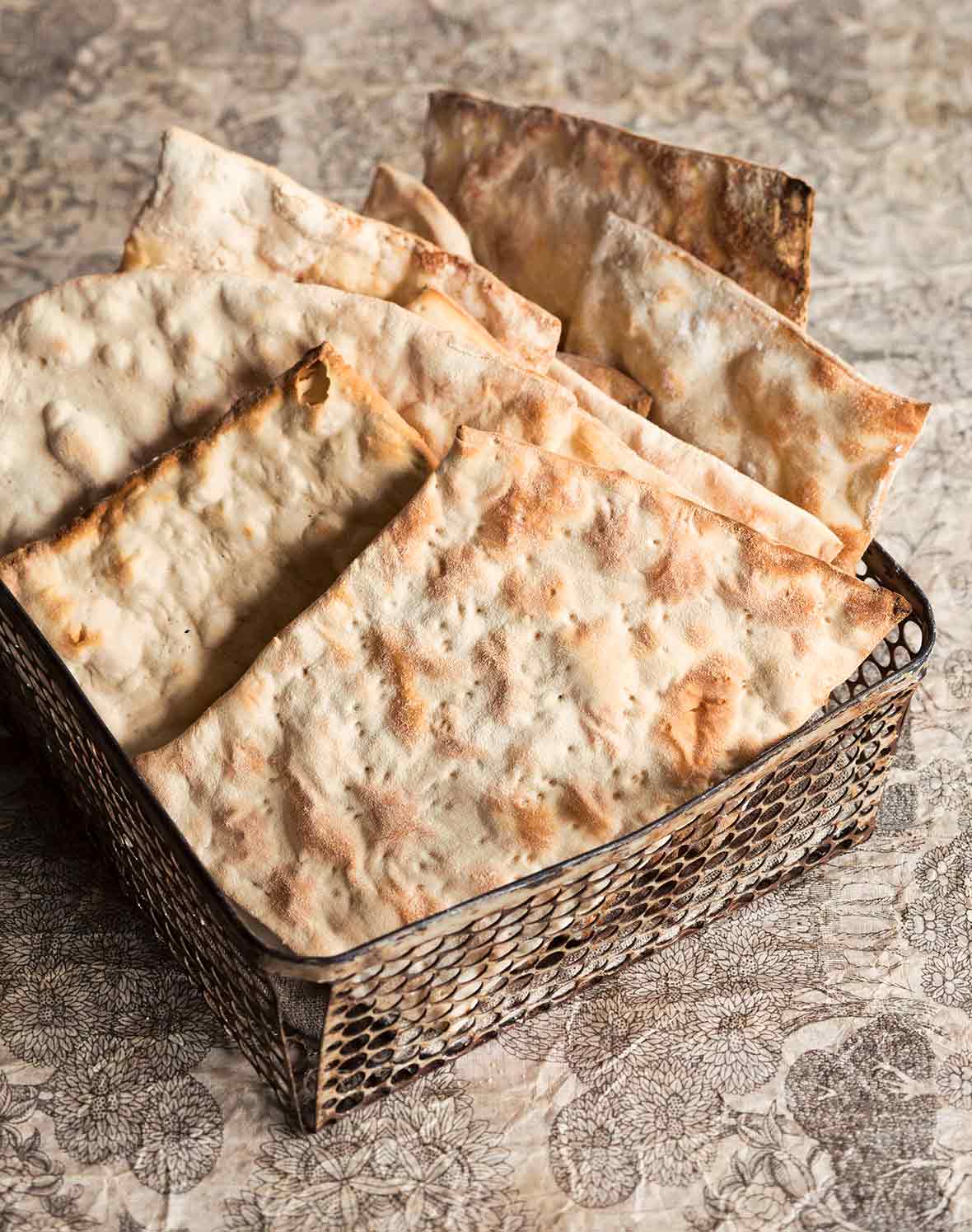 Homemade matzoh. Nope, we’re not kidding. It’s actually quite easy to make. And it’s pretty impressive to set it out during Passover in place of crackers for guests. As for what to schmear on that homemade matzoh, we can help with that, too. Just click your heels three times and then check out our Matzohpaloozah. Kindly note that this recipe is not strictly in accordance with kosher rules for Passover. Originally published March 19, 2013.–Renee Schettler Rossi

Preheat the oven to 500°F (260°C). Ideally you would place a pizza stone on the bottom oven rack, but realistically a 10-by-15-inch baking sheet will work just dandy.

In a large bowl, mix together all the ingredients, starting with just 3/4 cup water, until everything comes together to form a dough. If the dough seems dry, add a little more water, just a few drops at a time. Be sparing with the water and do not add so much that the dough becomes sticky. If you do not need the matzoh to be kosher for Passover, let the dough rest for 10 to 15 minutes. If you do need the matzoh to be kosher for Passover, proceed immediately to the next step so that you can attempt to finish everything in 18 minutes…or as close to possible as that.

Divide the dough into 8 pieces. Flatten a piece slightly and pass it repeatedly through a pasta maker, reducing the thickness each time until you evetually reach the thinnest or minimum setting on your pasta machine. Alternately, you can simply roll the dough as thinly as possible with a rolling pin on a lightly floured surface. Repeat with the remaining dough pieces.

Trim the rolled-out dough pieces into rectangles. (How many pieces of matzoh you get depends on how thinly you rolled the dough.) Use a fork to prick holes in the surface of the dough. lf salted matzoh are desired, brush or spray the dough surface lightly with water and sprinkle with salt to taste.

Carefully place some of the rectangles onto the pizza stone or baking sheet. They should fit snugly but should not touch. Bake until the surface of the matzoh is golden brown and bubbly, 30 to 90 seconds. Using tongs, carefully flip the matzoh pieces and continue to bake until the other side is golden browned and lightly blistered, 15 to 30 seconds. Keep careful and constant watch to keep the matzoh from burning; the exact baking time will vary from oven to oven and will get longer with subsequent batches. You want to let the matzoh get a few dots of light brown but don’t let the matzoh turn completely brown or it will taste burnt. Let it cool before serving. (When our testers made this, they devoured it within hours—and sometimes minutes—of pulling it from the oven, but typically with this sort of baked good you can keep it in an airtight container or resealable plastic bag at room temperature for up to a couple days.)

Making these homemade matzoh crackers left me with the same sense of wonder I had the first time I made pasta. The dough was a snap to put together with only 4 ingredients. I rolled it out by hand, and the resulting crackers reminded me of cream crackers—they were creamy and complete with golden blisters. They were also devoured within minutes of exiting the oven, gladly embraced by peanut butter and Nutella!

The homemade matzoh isn’t only fun to make, it tastes just like store-bought but fresher. And it’s more authentic-looking.

Although it was difficult to get the dough to the right consistency for rolling out, once I did, the results were wonderful. My dough was way too dry with 3/4 cup plus 1 tablespoon water. l kept adding water (approximately another 1/4 to 1/2 cup) until the dough came together. It didn’t feel right, so I made another batch, thinking I added too much flour to the first batch. Same thing happened. So I went back to the first batch (about 10 to 15 minutes later), and voilà, the dough felt perfect for rolling out. I rolled the dough out in the pasta maker. This amount was easy to handle and made for a good-size piece of matzoh. I baked it on a hot pizza stone, and it took 1 1/2 minutes on the first side and a quick 15 seconds on the second side at 500°F. Be sure not to let the matzoh get golden brown, as it starts to taste burnt.

Just let the matzoh get a few dots of light brown and you’re good to go. Think of the possibilities: flavoring the dough with different spices, cutting it into fun shapes, etc. I can’t wait for Passover!

Simple ingredients, some mixing and rolling, and I made delicious homemade matzoh. Well, maybe more like delicious homemade crackers. Mixing is easy, but rolling and trimming take some time. A quick bake in the oven resulted in a delicious cracker that somewhat resembled matzoh.

I used my pasta machine to roll the dough and felt that it was best at the second-to-last setting on the roller. Using my pasta maker resulted in sheets of dough that were about 36 inches by 5 inches when rolled at the thinnest setting. (And then there were 7 more to go.) Frankly there was so much dough I actually threw out the last ball because I was tired of making them. I was able to make my fork marks, cut the dough into rectangles, and transfer the sheets easily to a preheated baking sheet. I imagine that rolling by hand would yield a very different product. Using the pasta machine makes them fun to make and a consistent thickness. I could imagine these with butter, cheeses, tuna salad, or as a nice addition to a bread basket. I might even consider using them for Passover.

I think that next time I’d salt some of them. My preference was for the ones that I made a bit on the thicker side. Watch the oven carefully, as the brown blisters can cross over into burnt in minutes.

I must admit that I don’t care much for matzoh but with Passover not too far off I thought it’d be fun to make this with my grandkids. I don’t have a pasta maker and rolled the dough out with a rolling pin. We rolled the dough out onto a lightly floured board and had to add a little more flour a time or two.

The timing of 30 seconds was right on, but I’m sure it depends on your oven. Be careful and watch closely; they burn quickly.

Since my “assistants” were rolling them out, the shapes weren’t exactly consistent, but they were approximately 4 by 4 inches in size. The taste wasn’t marvelous, but matzoh is a pretty bland cracker. They were pretty good for matzoh and a wonderful thing to do with kids!