Skip to content
Home » The David Blahg » Fat, Fat Everywhere But Not a Drop of Lard 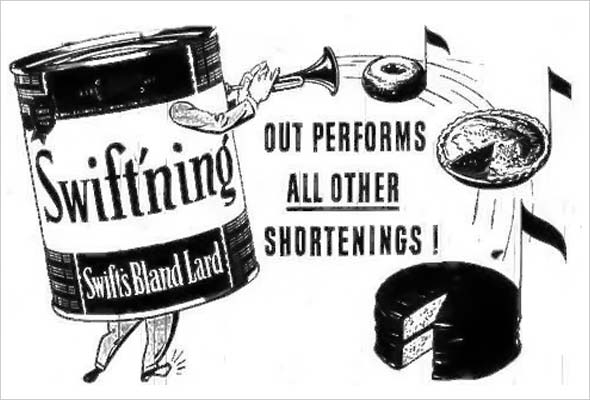 I had only one option left: exorcism della torta. The only way to free myself from this phantom was to summon it in my kitchen, wrest the secret of its crust, and forever be its master.

Even before I had a recipe, I headed off to Fairway, the nearby market with bins spilling over with fresh fruits and vegetables. Because it was the crust that was obsessing me, and being the carbo junkie that I am, I first hunted down its main ingredients. I was alarmed to find that Fairway carried no lard — just butter, margarine and something called “light butter spread.”

My next stop was the Korean deli in my apartment building. The young slip of a girl behind the counter didn’t even know what lard was. What’s the youth of this country coming to?

Desperate, I knocked on the window of the Mexican restaurant across the street. Surely it would have lard. But owing to the time (9:30 a.m.), the place was closed; the only life I could see was a clutch of Hispanic busboys huddled close together drinking coffee to ward off the miserable cold. “Can I borrow some lard?” I asked through the window. The boys looked at me as if I were speaking another language, which I was.

Had New York’s Upper West Side become so gentrified that none of its Hispanic past remained? Or had the low-fat craze become so fixed in our psyche that good old-fashioned animal fat was anathema?

Next, with nostrils flaring and eyes bulging, I flung myself on the mercy of the manager of a small supermarket. Taking pity upon me, he led me to my personal Holy Grail. There, sitting quietly upon a shelf — next to the cleaning supplies — was my own box of lard.

I rushed back to my apartment, faster than my age or frame could bear, and tore through cookbooks looking for a sensational cherry pie.

In my haste, I had forgotten the cherries. No matter. I would first perfect the crust, then move stalwartly on to the filling.

I tried recipe after recipe, searching for the elusive flakiness and richness of the crust I had savored for years. But every one proved a disappointment. Either too bland, too dry, or too greasy.

Finally, I remembered that Cook’s Illustrated had a pie crust recipe that was sheer gluttony: enough butter and vegetable shortening to send a supermodel into therapy. But would it work with lard? Would I finally possess that which I pined for? Would I reach the culinary heights of bakers long gone, perhaps from eating one too many lard pie crusts?