On June 11th, I had the pleasure and honor of being on a panel at The New School with some esteemed colleagues—John T. Edge, Anne Mendelson, Betty Fussell, and Molly O’Neill—to talk about one of the 20th century’s most important and controversal food journalists, Craig Claiborne. 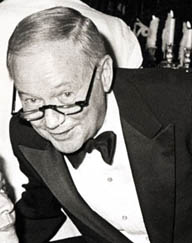 Because I’ve been publishing Leite’s Culinaria for more than ten years, I was given the exciting and onerous task of discussing the future of food journalism, a topic about which if you ask 100 people you’ll get 125 responses. I was utterly terrified. To be in such company, who collectively have published enough about food to fill a library, was overwhelming enough. But then to grapple with a topic few people have a viable, concise answer to? (I had visions of suffering the same fate as many Elizabethan actors at the rotten-vegetable-filled hands of a displeased crowd.) After all, if people knew the future of journalism, they’d already be making money from it.

In my research I discovered that technology, with its Internet, mobile communications, computers, etc., is both an asset and liability to food writers. To tackle my topic, I chose to speak to leaders in the writing, publishing, and technology industries…aw, hell, it’d be so much easier, and you’d get so much more out of it, if you just watched the panel instead of listening to me blither on here.