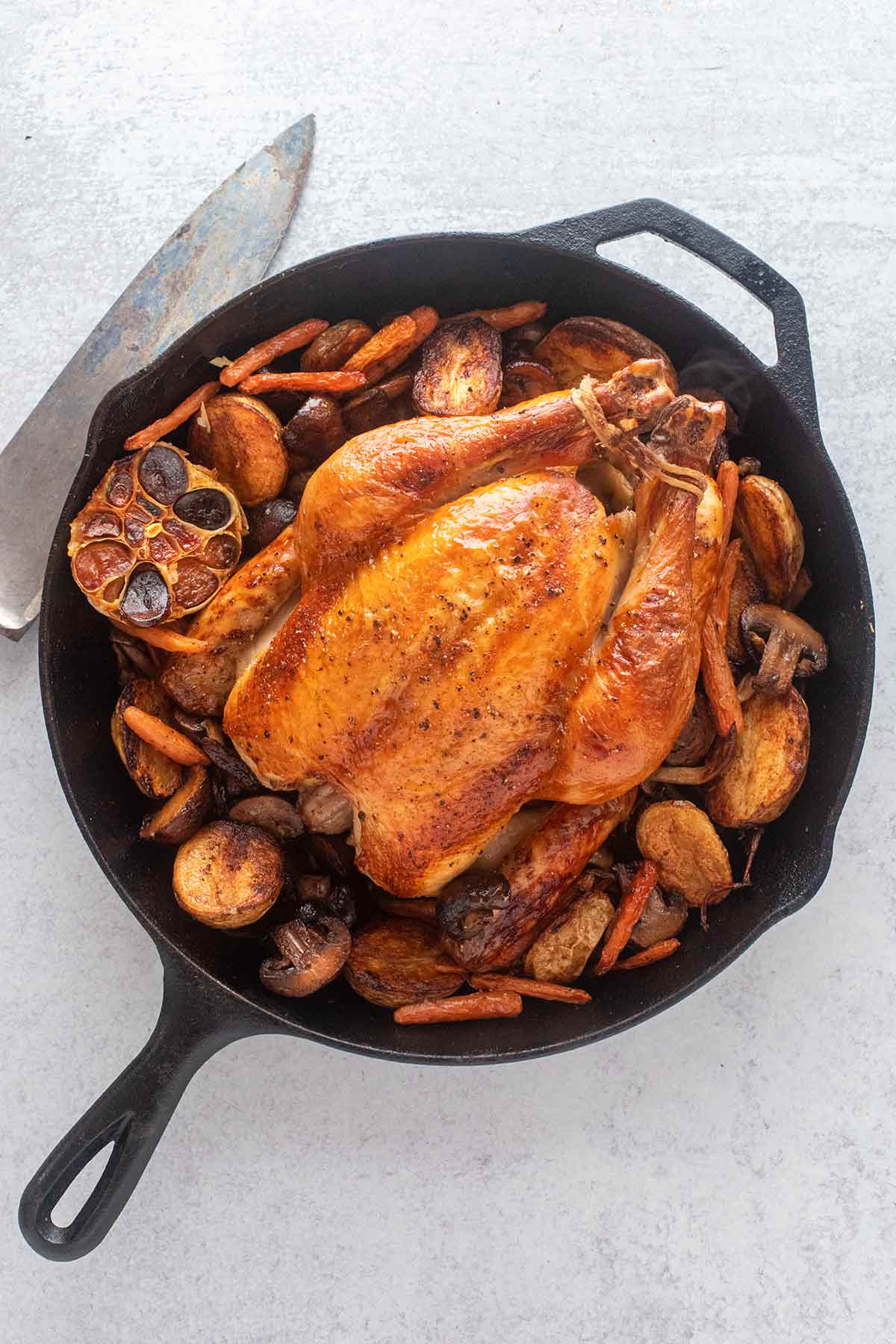 There comes a time when even the most beloved and closely held adages need to be challenged. Take Plato’s “necessity is the mother of invention.” Centuries ago, for example, long before refrigeration, people had to figure out how to preserve food for long periods, especially fallow times, and — boom — salting food, either by packing it in salt (think bacalao) or adding it to a brine (think pickles), was born. I submit that necessity isn’t the only path to invention. Laziness can be just as effective and infinitely less work.

At least in our kitchen.

The One has been making our Sunday suppers for more than 25 years. And for just about as long, roast chicken has been his mainstay. He has served it whole, cut up, spatchcocked and boned. The one constant: It has always been roasted. Through the decades, his palate and technique matured. Because he likes dark meat, I was regularly left with dry, tasteless breasts. So about 10 years ago, he jumped on the bandwagon of brining his chicken for 24 hours before roasting.

In the beginning, he didn’t bother to measure the salt he added to the water, and the results were, predictably, inconsistent — from barely perceptible to a veritable salt lick — but one thing was certain: The chicken was finally juicy.

Harold McGee, food scientist and author of “On Food and Cooking,” explained this phenomenon back in 1984, writing that the process of brining increases the weight of meat by 10 percent or more as it sucks up the salted water. And even though some is lost in cooking, it still has a surplus of moisture. Translation: a juicier bird.

The One kept tinkering. Adding sugar tempered the saltiness, but another benefit, McGee writes, is browning. And The One’s chickens did have that caramel burnish of those buxom birds found in the pages of magazines but without the coating of Kitchen Bouquet, the ubiquitous coloring liquid that’s a food stylist’s best friend.

Still, my taste buds were bored. What’s the point of all that work of brining if you can’t punch up the taste?

I implored him to add herbs and vegetables to the brine for a more complex flavor. He finally acquiesced and halfheartedly tossed them in after the sugar and salt had dissolved. “At least add them when you boil the water,” I pleaded. So, in went handfuls of thyme, rosemary and garlic. But whether boiled or not, they added little if any flavor. I began thinking brining was just another trend that would go the way of fat-free potato chips.

One Saturday, I shouted from the family room that he needed to mince the aromatics to release their oils and volatile compounds to give us at least a fighting chance of getting flavor into the meat. And that’s when the foot came down: “If you want to mince all that, be my guest,” he said, pointing a chef’s knife a little too close to my chest.

The prospect of having to wrench myself away from binge-watching “Schitt’s Creek” to chop vegetables for hours didn’t sit well.

“Fine, I will,” I replied. And to make my point, I ransacked the fridge for anything that had even the most tenuous connection to chicken. Rosemary, thyme, garlic? Of course. Leeks, onions, carrots, celery? Sure. Bay leaf? Why not. I piled a vegetable patch worth of produce on the counter. And while smirking, I pulled out our mega-blender and tossed in the ingredients. A little water to help things along, and I leaned on the button until everything was liquefied. “How’s that for minced?” I snarked, as I poured the puree into the brine.

I figured liquifying the aromatics would have at least some effect on the meat, but the effect that mattered most to me at the moment was walking out of the kitchen victorious, with only a five-minute bite taken out of my TV marathon.

At Sunday dinner, with my version of the old “Saturday Night Live” Bass-O-Matic skit forgotten, I was stunned by the intensity of the chicken’s flavor. For the first time, I could taste some of the constituents of the brine: the garlic, onion and rosemary. The One, too, was surprised. To make sure this wasn’t a fluke, I made it for guests and had other cooks make it for themselves. They all were just as astonished.

Convinced I had invented a brilliant new brining method, I reached out to Kenji Lopéz-Alt, food-science guru at SeriousEats.com and author of “The Food Lab.” He explained to me the bump in flavor: “Blending the ingredients busts open more cells and releases more aromatics. It works because it increases the concentration of aromatic compounds so that they have a better chance of getting into the meat.” In short, I had stacked the flavor cards in my favor.

I phoned McGee, and he agreed, calling the pureeing an “excellent move,” but then he shot a cannon-size hole through my giddiness. He said that no matter what I did, the aromatics couldn’t seep more than a few millimeters into the meat because of the size of the molecules, which are larger than those of salt. (Our mouths respectfully disagree, sir. We believe we taste flavor in every bite.)

He did throw me a bone when he explained that because the brine had such a high concentration of aromatics, thanks to the pureeing, I was most likely packing as much flavor as possible into the meat as well as onto the skin. “You’ll get some of the flavor to stick to the skin because of the rough surface.”

Okay, so maybe The One and I didn’t best the ancients and invent an entirely new brining technique, but we did — through good old-fashioned lassitude and marital bickering — move the needle significantly and put the tastiest bird we ever had on our table. And hopefully yours. Not too shabby for 15 minutes of work.

Now if you’ll forgive me, there’s a couch in the other room calling my name.