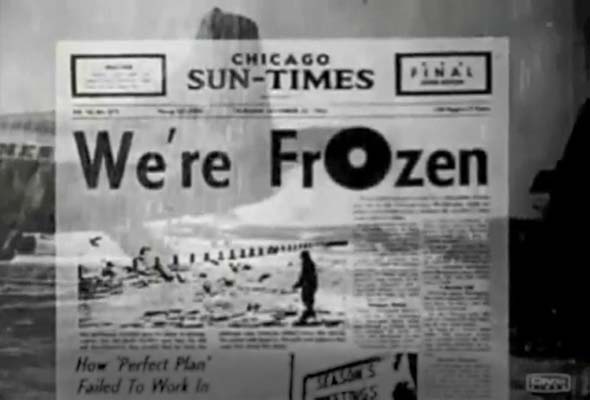 I can’t believe I’m actually saying this, but after more than seven feet of snow pounded us last winter in Connecticut, I miss it. Sure, the entire back of the house was destroyed by ice and took weeks to repair. And, yes, it’s true, the bushes out front still haven’t recovered. But I miss snow. So does The One. We’re snow freaks. I think it comes from a cellular-level aversion to humidity. He grew up in the steam oven called Baltimore, and I, the South Coast of Massachusetts, where Narragansett Bay is fond of making it near-impossible for clothes to dry on the line in August. The minute the weather gets sticky, on goes the central air conditioning and in the freezer go our heads.

But our utter adoration of all things cold is more than DNA deep. Part of our snow fetish is what we do while it’s piling up. That’s when we pad into the kitchen, The One in his saggy plaid pajamas, his rooster hair sticking up, and I in my baseball cap. I grab a cookbook and languorously flip through it while he roots around in the fridge and the pantry. What we really want to make, though, is what I’ve dubbed Blizzard Beef. It’s a dish that we tackle only when the three acres of woods out back turn into a swirling wall of nature’s equivalent to Wite-Out. In other words, true to the recipe’s name, a blizzard. Sadly, with the exception of a marvelously freak storm in October, which I missed because I was in Indonesia, this year we’ve had nothing more than mere pathetic dustings. Our brand-new KickAss 14,000-watt generator never got a workout.

Still it’s hard not to get hopeful when weather forecasts grow fantastically ominous, causing ripples of anxiety that send our Roxbury neighbors to Costco for bottled water, rock salt, and 100-ounce bags of Doritos and tubs of hummus. While other people cancel plans, we make menus. Lots and lots of menus. Deep-dish French toast for breakfast. Coq au vin for lunch. Daube for dinner. After all, you never know when foolhardy friends, sans generator and facing empty shelves at the supermarket, just may need food, lodging, and some measure of civility and frivolity for a few days.

Blizzard Beef, on the other hand, is something we reserve for us. No sharing. Ever. It’s our tradition. I don’t even know the dish’s real name. All I can tell you is the recipe is from The One’s family and owes much to Pennsylvania Dutch frugality. It calls for three ingredients: beef chuck steak, Worcestershire sauce, and water. The beef is seared almost black on all sides, then water and several very healthy glugs of WS are poured into the pot. It’s left to its own devices to slowly, gently burble away over the wee-est of flames for hours–usually three or so in all. (Here’s a video we made several years ago on the eve of a real storm.)

Those hours when we’re puttering around the kitchen, singing to Dream Girls and waiting for the Blizzard Beef to be done, are when the meat and liquid start to tango, Argentine style. The beef begins to break down, giving itself over to the charm and wiles of the sauce. Emboldened, the Worcestershire begins to concentrate, leaning in with a sharp vinegar-y tang which the beef can’t resist. And if you close your eyes, you can detect the impish scents of lemon, cloves, and pepper, each of which also seduces the meat–and me, for that matter. After several hours, the beef’s resistance is gone. It can be skewered with sharp objects and makes no objections. The Worcestershire sauce has claimed another lover.

(Excuse me while I take a moment to gather myself.)

This past weekend, The One and I were snuggled under the quilt on the couch, with Chloe, our Persian, burrowed somewhere in its folds, watching TV when the local weatherman interrupted  to warn of us of a “storm of potential significance.” The way things have been going, we knew what that meant: at best a heavy frost. The One looked at me. He didn’t have to say it; I knew he had Blizzard Beef on his frontal lobe.

But could we, really? In such undistinguished weather? It felt as if we were breaking some time-honored tradition, like wearing white after Labor Day. Or watching the Macy’s Thanksgiving Parade and not yelling at the Broadway production numbers. Blizzard Beef without a blizzard. It was now or never. So with the temperature hovering in the mid-50′s, we toasted the spoilsport that is global warming and tucked in.

I wasn’t going to bother posting this. But maybe somewhere, someday, you’ll be lucky enough to get caught in a blizzard with only beef chuck steaks, Worcestershire sauce, and water and will need to do some kind of MacGyver cooking. If so, here’s your dish. It’s so simple, there’s not even a recipe. We always serve it up with over-the-top (read: tons of butter, cream, and love) mashed potatoes and some kind of green as an attempt to feel virtuous.