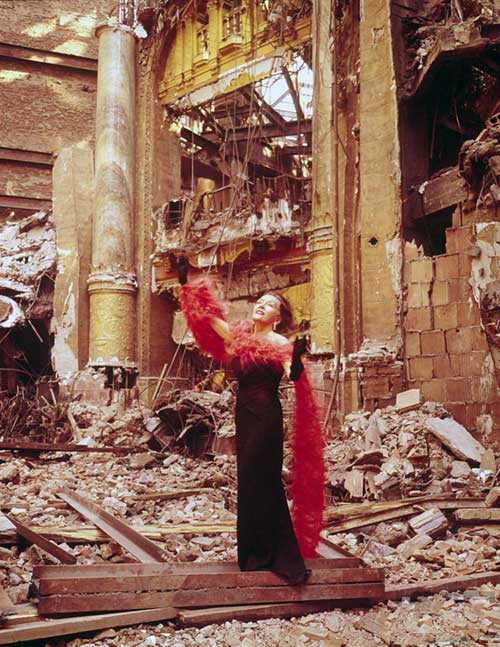 For a moment there, I felt like Gloria Swanson in that famous 1960 Life magazine photo (above), in which she stood grand and tall in her dotage amid the rubbled remains of the Roxy Theatre in New York City. (We’re talking the same theater that opened in 1927 featuring Swanson in the silent flick The Love of Sunya.) The reason for my almost mistaking myself for her doppelgänger? My Connecticut kitchen is about to be demolished—stripped bare to the dry wall—to make way for a sleek stainless-steel emporium brimming with KitchenAid appliances, custom wooden cabinets, Chroma countertops, and a bill so huge, I’ll likely have to cash in my IRA.

“It’s about time, don’t you think?” I’d asked The One several months ago. After all, the bottom wall oven has broken down five times and is now as dead as they come. The top oven can’t keep a steady temperature to save its life—or my brioche. The downdraft ventilation system on the stovetop has also keeled over several times and, as such, has been in the upright and locked position for several years because I fear if we lower it, we’ll never see it again. The dishwasher—ah, the dishwasher. It’s cleaned the floor almost as many times as it’s cleaned our dishes, thanks to a capricious leak. Then there’s the fridge, which is one of those confounded side-by-side numbers. As far as I’m concerned, it’s useless; I can’t get a half sheet pan of anything in there, and forget about stashing anything larger than a modest pot roast in the narrow depths of the freezer. To add insult to injury, the former owners decided to abut the monster against a left wall, making it impossible to completely open the freezer door. (WTF were they thinking?!)

Despite my constant rants and complaints, The One wasn’t drinking the Kool-Aid. For months and months we’ve been saving to remodel the kitchen in our NYC apartment, a kitchen so small, so pathetic that we stopped city entertaining years ago. We couldn’t bear the embarrassment when people would swing open our Donna Reed-inspired kitchen door, poke their heads in to see where we cook, and then have their faces crumble in disappointment—or pinch in judgment—when they cast their eyes on The Truth. 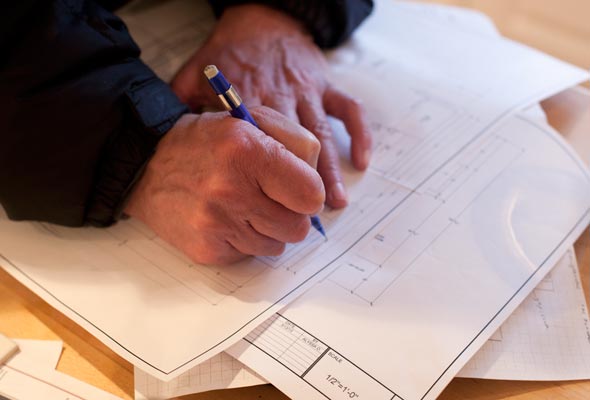 “What if we shunt the money for the city kitchen to Connecticut and then redo the city next year?” I casually mentioned to The One as I slid a piece of my Hershey’s Chocolate Cake in front of him. Over the years I’ve come to the conclusion that his neurons stop firing and his central nervous system switches over to compliant mode when he’s confronted with chocolate. As he licked the plate (yes, he actually licks the plate when he likes something), he relented—but with the caveat that I pay for the entire renovation. After a second slice, he caved when I showed him the dirt-cheap, butt-ugly stainless-steel sink I said I intended to buy, my fingers crossed behind my back. He immediately, and I must admit, magnanimously, offered to buy a sleek white enamel farmer’s sink. Men. They’re so easily played. 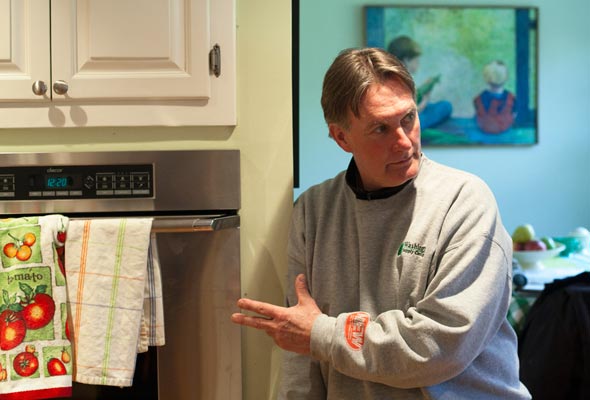 And thus The Great Project began. There was no way in hell I was going to slide my new appliances (generously supplied by KitchenAid*) into painted-over knotty-pine cabinetry that’s more chipped and cracked than a trollop’s cherry red fingernails. So Dan Keys, our contractor (above), came in and asked me to lay out my dream kitchen. Wind me up and let me go. I whizzed around the room, my hands moving faster than Lorin Maazel’s conducting Beethoven’s Ninth Symphony, carving out a pantry here and a recessed fridge—one that actually opened—there. I stretched the air to make a larger, more workable island. I pulled out invisible knife drawers and hidden trash bins. I played God, creating light where there was none. When I was done with my dance, I was so exhausted I needed lunch and a nap. Dan needed an aspirin, I think. After that, Larry Komisar and Don Hodkoski of Litchfield Kitchen & Bath stopped by three times with tape measures, cameras, and puzzled looks, and after several weeks the kitchen design went from rough pencil sketches (above) to floor plans to computer-generated elevations. 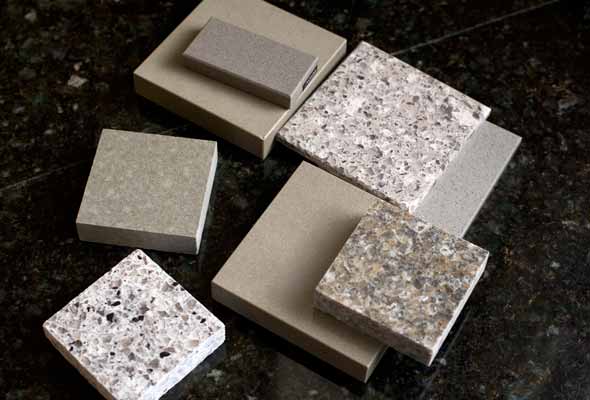 The last major hurdle? Countertops. Here’s where The One and I parted ways. I wanted a simple cement look (above center, beneath the smaller sample). But The One stood firm, insisting on a slightly mottled counter (above left). “Just in case you stain it while you’re cooking,” he said. What the hell? I figure it’s a small price to pay for a farmer’s sink. (Update: We eventually decided on an almost white counter. We just fell in love—with the same one. What can I say?) We did look at zinc for the wet side of the kitchen, but The One felt it was too much metal. Little does he know that I’m in cahoots with Dan to see if perhaps we can have a section around the sink that’s zinc. It ages so gracefully. Not unlike dear Miss Swanson.

*LC Editor’s Note: “What? Wait? David took free appliances from KitchenAid? Isn’t that, like, unethical or something? Criminal, even?” Well, dear reader, no, it’s not. Federal law simply requires that anything given to a blogger for free must be disclosed to you. Fabulous, inquisitive, witty you. The gifting of these appliances isn’t any different than manufacturers donating appliances to television shows, cooking demo kitchens, stores, etc. And it makes perfect sense considering that David and The One are planning to host their own Google+ Hangout on Air Web series from their brand-spanking-new kitchen. Besides, they’ve bought KitchenAid appliances for their previous homes and have been quite, quite content with their performance. Plus you know David: He’s so darn opinionated, nothing is going to sway his opinion and no one can muzzle him. If he’s not happy or if he doesn’t like something, you’ll know it. That’s his promise to you.